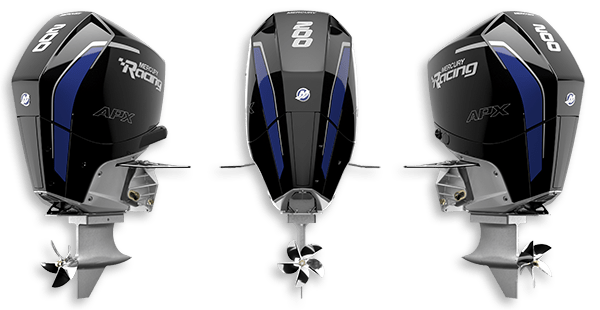 Mercury Racing expands its Apex Series of competition outboards with the introduction of the Mercury Racing 200 APX, a V6 four-stroke model designed for UIM F2 and APBA OPC tunnel boat racing. Rated at more than 200 horsepower, the 200 APX outboard offers racers a very durable powerhead and the latest in four-stroke engine technology, while reducing exhaust emissions by 50% compared to the Mercury Racing 200 XS OptiMax model and 90% compared to the legacy SST 120 model.

“The new 200 APX is designed to deliver outstanding performance while reducing the cost of maintenance and fuel for race teams” said Stuart Halley, Mercury Racing general manager. “Mercury Racing is also striving to produce high-performance and competition engines that keep emissions to a minimum, and the 200 APX helps push that effort forward.”

On both the UIM F2 and APBA OPC circuits, racers compete using carbon fiber tunnel boats weighing just over 510 kg including the engine and driver. F2 boats are capable of top speed approaching 190 km p/h and can accelerate from zero to 100 km in just over 5 seconds.

The 200 APX powerhead is based on the Mercury Marine 3.4-liter double overhead cam/four-valve powerhead. To prepare the engine for competition the compression ratio is raised from 10:1 to 11:1 and peak RPM from 5800 to 6800. A lightweight flywheel allows the engine to rev more quickly than the stock motor. The engine requires readily available 98 RON fuel gasoline.

The 200 APX uses the same 12-inch midsection as the Mercury Racing 360 APX V8 competition outboard, with a structural wet sump driveshaft housing and integrated power trim and lift with remote pumps. To increase propeller speed to 8000 RPM an overdrive spur gearset increases the input shaft speed to the gearcase.

The 200 APX produces about 20 percent more torque than the two-stroke motor, but at a lower RPM the overdrive gearset will swap some of that torque to increase propeller RPM, which allows most teams the opportunity to use the same propellers they have been fitting to the two-stroke motor.

The Mercury Racing 200 APX will be available in May 2021, to qualified F2 racing teams only.

Combining comfort, efficiency and respect for the environment, with a keen eye for the details that make a boat instantly recognizable: this...
Read more
Boating

chaefer Yachts is the largest Brazilian shipyard, with more than 30 years experience in excess of 3,500 units manufactured and delivered around...
Read more
Boating

The 10-metre Foiler, the ‘Flying Yacht’, took the boating world by storm when it was first unveiled in 2018. A boat for...
Read more
Boating

The new Scanner Envy 1200 is born from the studio of Donato Montemitro, founder of the Scanner Marine shipyard. Never stop! This...
Read more
Boating