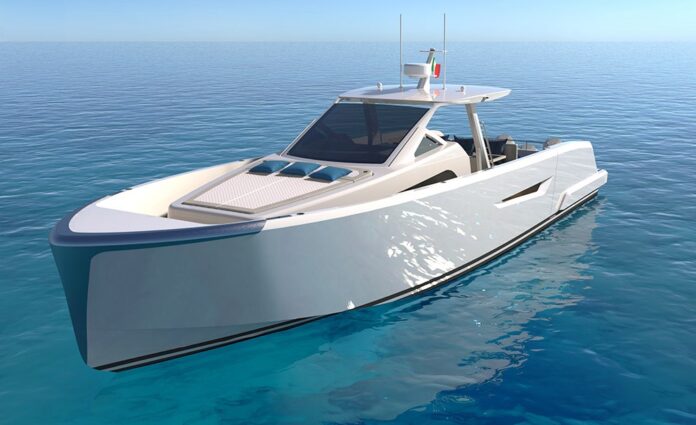 Founded by Laura and Francesco Ceccarelli, Tuxedo Yachting House launches its first boat: the Tuxedo 13.800, a walk-around by Italian designer Luca Dini. The first in Italy and among the very few in the world to build full-custom medium-sized boats with a construction material that finally eliminates all mold-linked constraints.

As Prince of Wales, before becoming king, Edward VII had expressed the desire for an informal blue evening dress to be worn in country estates, an original idea in the world of royal tailoring. Between legend and creativity, this was how the “tuxedo” was born, named after the club where it was worn in public for the first time in 1886: a clear idea, perfect creation, indisputable success.

Today, the same synergy and dynamism characterize the world of Italian yachting with the return of Francesco and Laura Ceccarelli on the shipbuilding market with the all-new Tuxedo Yachting House brand. Behind them, a long family experience. In 1963, in fact, their father entered the nautical world and immediately understood the potential of aluminum as a construction material. The growth of the shipyard was unstoppable: 200 boats built, 50 of which were aluminium superyachts between 35 and 54 meters.

Today, Laura and Francesco Ceccarelli exploit the experience and keen business acumen of their father, with a special focus on extra luxury market and Made in Italy: exclusivity and professionalism will be the basic values of the custom day cruisers they have promised to build.

The extensive use of aluminium allows for a complete customization of the yacht even in medium sizes: not only in the design phase, but also in the construction one. Unlike fiberglass processing, constrained by the presence of molds and therefore limited to what the shipyard has already foreseen. Aluminium is Tuxedo Yachting House’s preferred construction material for its walk-around models, a boat type that combines the benefits of an open with those of a cabin cruiser. Teamwork, collaboration with luxury craftsmen and the sensitivity acquired through years of experience in the nautical sector represent an absolute guarantee for the customer.

Furthermore, Tuxedo Yachting House takes care of the environment, recycling construction materials and promoting the use of full electric battery based system or an- hydrogen-powered such as the Energy Pack by h2boat. The latter is the only system in the world that produces hydrogen from water, stores it at low pressure and room temperature and uses it to produce electricity. In both cases the result is to have energy with zero noise, zero vibrations, zero discharges and emissions. These solutions also give the possibility to navigate at low speed even within the protected marine areas, otherwise off-limits.
Tuxedo Yachting House enters the boating market with the Tuxedo 13.88, the first day cruiser of the shipyard’s fleet. 43 feet long, it is available in two versions: Black Tuxedo and Blue Tuxedo, different in the deck layout. The project is issued from the renewed collaboration between Laura and Francesco Ceccarelli and the well-know custom yacht designer Luca Dini.

Built in Lavagna and with all-italian details, the Tuxedo 13.88 offers all the pros of alumium projects – versatility, sturdiness, lightweight and safety – and represents the evolution of the modern day cruiser concept. The abundant deck spaces and the surprisingly large interiors make this boat suitable for both short- and long-range cruising experiences.

The exterior design has been studied to maximize both aesthetics and functionality: the lines of the Tuxedo 13.88 provide the scenographic and functional effect of the opening wings that, when open, create a 12-square-meter terrace (8.5 m2 when closed) in direct contact with the sea.

Equally alternative in aesthetics and function are the two bow layouts available. The owner of the first 13.88 has chosen the Black Tuxedo version with panoramic sundeck. The Blue Tuxedo option, instead, is designed for anyone looking for a pure day cruiser and is equipped with a living zone, panoramic table and forward-facing seating which, when necessary, can be transformed into a single sunbathing platform.

Depending on the version selected, headroom changes, however maintaining a remarquable average of 1.85 meters. The owner can choose between a Black Tuxedo solution with cabin, galley and toilet and a Blue Tuxedo one, with day toilet.
The interiors of the Tuxedo 13.88 can be family-oriented or more intimate, according to the owner’s needs. The owner, in fact, is completely free to choose the layout he prefers, without feeling constrained to making choices that are contrary to the true intended use of the boat. He can therefore give up useless equipment or bulky interiors which inevitably translate into lower performance, higher consumption, more pollution and, of course, wasted space.
Unit number one, destined for an owner from Hong Kong, has a bow cabin with clean-cut lines, double bed and a large storage compartment underneath.
An alternative version, already studied by Luca Dini, can offer two twin beds that can become a single one by raising a small area of the floor.
The head of the first Tuxedo 13.88 has custom accessories, a 70 x 100 cm shower tray and 1.90 meter headroom.

Minimal in lines and functional, the galley is equipped with sink, induction plate, ice maker and a 75 liters refrigerator. The cockpit, consisting of two sofas in the shade of the T-Top and convertible into a day-bed, features two refrigerators, 35 liters each.
The walk-around steering console is equipped with SIMRAD navigation tools, including two 12-inch touchscreen displays, customizable in parts and arrangement.