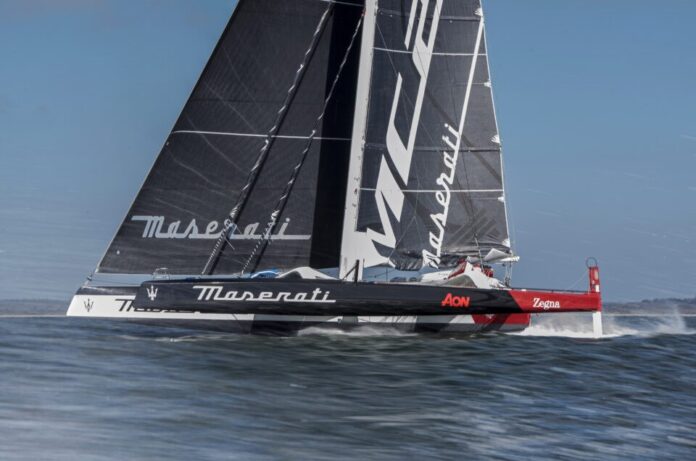 Double victory for Giovanni Soldini and Maserati Multi 70, who conquered the Channel Record with an elapsed time of 4 hours, 30 minutes and 49 seconds, beating for a little over 3 minutes their opponent PowerPlay (4 hours, 34 minutes and 6 seconds). The two trimarans set sail from Cowes (UK) this morning: Maserati Multi 70 crossed the starting line at 9:13:40 GMT, a few minutes after Peter Cunningham’s MOD 70 PowerPlay, and arrived at the finish line off Dinard (FR) at 13:44:29 GMT, sailing 138 miles with an average speed of 30,59 knots.

The Italian Team’s time is 18 minutes better than the 2015 record set by Lloyd Thornburg and Brian Thompson aboard Phaedo3. The elapsed times have been collected by the two competing teams, they will have to be ratified by the World Sailing Speed Racing Council.

Soldini explains: «The first hour was quite slow, we had to gybe 5 or 6 times to get out of the Solent. Luckily, once we were in the Channel we took off and we sailed fast as lightning! We crossed the channel very quickly, with an average speed over 35 knots. However, that wasn’t enough to beat PowerPlay, who was also sailing incredibly fast, but what really made the difference was the route: we were extremely careful to the course, especially near the Channel Islands, and that is what made it possible for us to gain those few minutes of advantage. I want to thank not only my incredible Team, but also Peter Cunningham and PowerPlay’s crew, who made the challenge even more exciting!»

The Cowes to Dinard is the second of the three records in the English Channel in Maserati Multi 70’s racing program: on April 16th the Team conquered the Plymouth to La Rochelle record (12 hours, 15 minutes and 21 seconds) and, if the weather allows it, in the next few weeks they will attempt a new challenge, to beat the Fastnet Original Course record (form Cowes to Plymouth, sailing around the Fastnet Lighthouse, south of Ireland), set just a few weeks ago by the competitor PowerPlay.