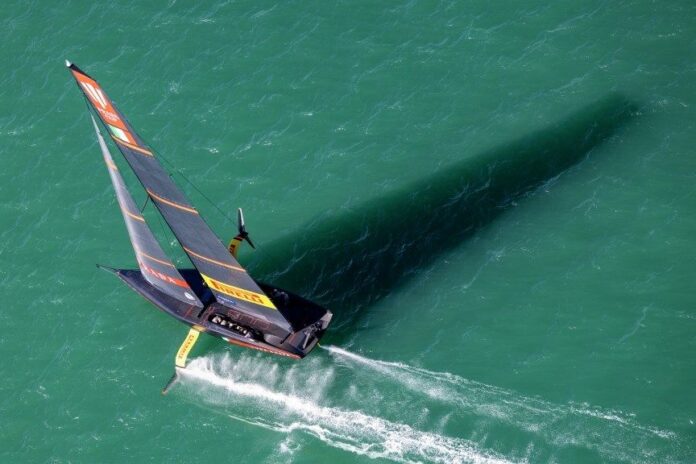 The new class of AC75 flying monohulls encloses significant innovations, not only in terms of hull shape and appendages, but also in terms of its sails.

Compared to the previous America’s Cup edition, in which the AC50 catamarans featured a mainsail wing, the AC75 operates with a soft wing. This new wing consists of two traditional mainsails, connected by a complex system and hoisted in parallel on a mast with a D-section, free to rotate, and fixed to a sphere-shaped structure on the deck.

The rotation of the mast and full battens, that cover the full length of the sail, functions like a wing and provides a greater performance than a single mainsail.

The development of the soft wing has been complex, especially when it came to creating tools to trim and control the shape of the sail, such as the Camber *(1) and the Twist *(2). These systems can be applied to the top 4 meters from the masthead down, and at the bottom in the first meter and a half from the base.

The mainsails are adjusted by the mainsail trimmer who has a handheld mini-console, similar to a video game console, with a series of buttons that trigger different functions, such as the mainsail sheet or traveler, as well as the spanner for rotating the mast, or the Outhaul *(3) or Cunningham *(4).

Throughout the campaign, each team was allowed to build and store 10 mainsails in its kit of sails (the sail inventory list), designed to be used in various wind conditions, both during racing and in training.

There is a department of 10 people within the team who are dedicated to the design of these sails, with the aid of computer models that simulate their shapes and loads and using specific tools developed in collaboration with North Sails.

Once created, the sail design is sent to the United States to for the production of the initial shape on a three-dimensional mold, where the tapes are placed according to the design team’s instructions. Once this first phase is finished, the sail is shipped to the headquarters of North Sails Italy in Carasco, where it is completed before shipping to the Luna Rossa Prada Pirelli base. Here a group of four sailmakers works to finalize details and finishes, such as the corners, positioning of the logos, cutting and inserting of the battens.

The sailmakers also work very closely with the designers and sailors and carry out all the modifications required resulting from the sea trials, the analysis of data from the sensors on board and the numerous photos and videos taken on the water. Sometimes the modifications are fractional, but can lead to very significant improvements in boats performance during racing.

As for the headsails, the maximum number allowed by the rule is 29 jibs and code zeros. Each sail is designed to be used in specific wind conditions. Normally the headsail is chosen a few minutes before the start and stays the same throughout the race. Given the elevated speed of the boats and very short races, the sails are not changed during the competition as in traditional regattas. In fact, any improvement in performance would not make up for the amount of time lost in a sail change.

The headsails are adjusted by trimmers with winches and a hydraulic system that controls additional adjustments, such as the jib cunningham and the position of the travelers.
The sails are made of carbon, and in a small part of Dyneema and other aramid fibers, such as Kevlar and consist of a series of tapes, or bands of unidirectional pre-impregnated carbon filaments.

All sails are subject to measurement controls. Like happens for each part of the boat, the sails are also subject to inspection by a committee, to ensure that all details comply with the class rule.
Today, sail design still represents a fundamental part of the research that goes into the America’s Cup design. Many innovations that emerged in previous campaigns have also found a way of being applied to traditional regattas or yachting.

*(1) Camber: Indicates the depth of the wing curve
*(2) Twist: Deviation of the leech with respect to the boom axis, in other words the twist of the mainsail exit curve.
*(3) Outhaul: This is a line that, through adjustment, increases or reduces the tension of the mainsail base. This modifies the amount of fill in the lower part of the mainsail, as well as its profile and the degree of curvature.
*(4) Cunningham: It is a system that applies an opposite action on the halyard, to modify the shape of the sail. It allows a quicker and more precise trim of the sail curvature, without need to touch the halyard. It was invented by Briggs Cunningham, winner of the 1958 America’s Cup on the yacht Columbia.