SX76, the new born of its product range presented by Sanlorenzo 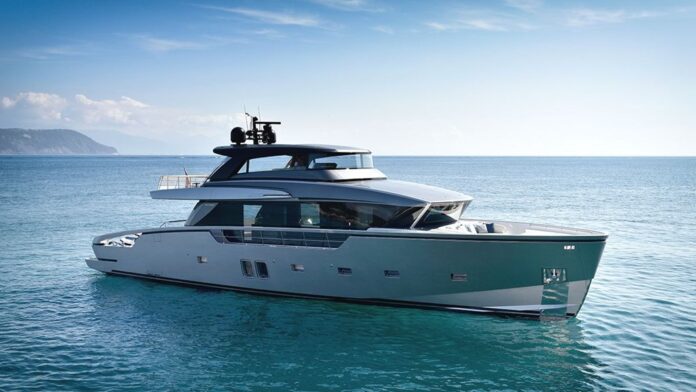 After the extraordinary success gained from the SX88 at the 2017 edition of the Cannes, Genoa, Düsseldorf and Miami Boats Shows, as evidenced by the sale of 13 units to date, of which three have already been launched, Sanlorenzo, on the occasion of Cannes Yachting Festival 2018, will officially present the new born of its product range: the new SX76 crossover yacht.

A range of products that is characterized by unprecedented intelligent, rational and practical solutions and, as always, is marked by Sanlorenzo’s unmistakable style, based on moderation, a balancing of volumes and masses that maintain, in this latest addition, the characteristic elegance that has become an immediately recognizable signature style of the brand.
The concept behind the project starts once again from the company’s desire to propose a completely innovative approach to on-board space, an approach by which the Zuccon studio, for the exterior lines, and Piero Lissoni, as pertains to the interior design but also as the Art Director of the company, have interpreted the first version of the SX76 launched on the occasion of the Cannes Yachting Festival 2018.

The project
A happy and intelligent synthesis between the classic motor yacht with flying bridge, of which Sanlorenzo has been, and continues to be one of the first protagonists in the world, and the recent and growing explorer model, the SX76 incorporates the total family feeling of the SX line, keeping all the style features of SX88:

    The availability of large open spaces and large windows that ensure an effective and optimal interior/exterior access, a feature increasingly requested by the most experienced and knowledgeable owners.

    The perfect integration between aesthetics and functionality. The hull with a very seaworthy high bow, maintains the profile descending towards the stern that slims the whole mass and gives it a substantial appearance, also making the SX76 a vessel able to face any eventuality. The superstructure featuring ample glazed surfaces harmoniously integrates the “voids” of the windows into the “full” areas of the structure.

    The wheelhouse located on the upper deck, the flying bridge, has a windshield and if necessary can be enclosed sideways by double-hung windows, while the whole stern area of the bridge can be enclosed by a series of strataglass panels.

    The wheelhouse placed only on the fly, maintains free the living room area at the bow on the main deck, which can therefore be dedicated to the dining room adjacent to the kitchen (available in a fully enclosed version or as an open-space kitchen) or, as in the version designed by Piero Lissoni, the main deck interior becomes a single open environment which houses as a continuous living area, the living room, dining room and open kitchen.

    The bow area of the main deck is fully equipped to offer a livable, convivial, and relaxing area with a large sunbed, convertible into a very private and shaded dining area with awning. Opposite, the triangle of the extreme bow is completed by another sunbed surrounded by comfortable cushions.

    The swimming platform at the stern, four steps lower compared to the main deck, houses the four-meter tender and a jet-ski. Moreover, harmoniously hidden in the profile of the extension of the left handrail, is the crane to move the two toys without cluttering the area with technical gear. Once freed from the tender, the vast platform, which extends about 50 centimeters on the water surface, becomes an extraordinary beach club of over 18 square meters, furnished with sun umbrellas and sunloungers.

The SX76 lower deck offers accommodations in four double cabins. The owner’s suite is at the center of the ship, while the VIP is at the bow, and the other two-bed guest cabin is on the starboard side. The crew cabin is located at the stern of the owner’s suite, at the bow of the engine room, with direct access, which thanks to the IPS 1050 transmission of 596kW/800 hp is moved much further aft than traditional axle transmissions.

Among the other innovative elements already successfully applied on the larger SX88, the new SX76 offers:
•    Advanced construction process, with prefabricated elements and open hull assembly
•    Fiberglass hull and carbon fiber superstructure
•    Motorization consisting of two Volvo Penta IPS 1050
•    Semi-displacement hull of 22 knots with great flexibility of use from displacement to fast displacement, tested in the naval pool of Wageningen (Holland), for optimization with motorization
•    Reversed superstructure windshield and front glass

The SX76 was born in the Sanlorenzo style office, where the creative contributions of Luca Santella, creator of the SX line, and of the Zuccon International Project studio, who took care of the layout and the exterior lines, combined, while Piero Lissoni has proposed a special edition by which the interior of the first SX76 unit has been created. The waterlines are always ensured by Lou Codega, the internationally known American designer for fast and ocean fishing boats.
“From my point of view, states Bernardo Zuccon, the SX76 is a splendid interpretation of the relationship between man and the sea. Boating maximizes this relationship and the boats designed to live in close contact with the sea are the right boats. The SX range pushes this relationship to the maximum. Our work consisted in making the most of the space and ensuring, while reducing the size, a formal balance without losing the functional one. The challenge for SX76 was to get the same features as the larger SX88 without altering its style balance. It is an expression of the merging of the legendary and ordinary relationship between form/function”.

SX76 has been officially presented to the market and the press at the Yachting Festival in Cannes 2018 precisely in the same first version with interior design by Piero Lissoni.
The SX76 project proposes, on a smaller scale, the idea presented for the first time in the SX88, of an open-space yacht, a “social” boat that thus develops into a unique and continuous environment from stern to bow where the interior living space is maximized with the open kitchen, adjacent to the dining room, next to the living area, with seamless continuity between the interior and exterior, thanks to the large windows overlooking the sea.

The décor of the first unit is a perfect example of Lissoni’s clean and elegant style that combines elegance and simplicity, in a space characterized by soft and neutral colors flooded, on each side, by natural light that creates a warm atmosphere with a homey feel. This also contributes to the decision, in contrast, not to adapt the furnishings to the areas, but rather to place them as freely as in a house where design styles are combined as icons of the great masters and object trouvé, while seeking a maximum visual impact.
The ultimate protagonist of the interior design project, the picturesque staircase designed specifically by Lissoni for the SX76, a true sculpture that develops like a sinuous and continuous line flowing into the lower deck, going back up to the flying bridge, across the main deck without any interruption.

Another important factor of the SX76 is the close collaboration of Sanlorenzo with companies that represent excellence in international design and that have adapted their products in technical characteristics, materials and construction solutions to marine needs. Among these, Boffi’s contribution on the bathrooms and kitchens has been fundamental.

The SX76, built at the historic shipyard of Ameglia where the Sanlorenzo headquarters are located, has already received a strong response from international ship-owners who have already purchased the first eight units.

Tansu Yachts of Turkey has just signed an agreement with entrepreneur Angelo Casartelli, the visionary founder of Sundeck Yachts and the Group...
Read more
Motor Yachts

Following hard on the heels of the announcement that Ekka Yachts facilitated the sale of the  10th unit in Sanlorenzo’s 500EXP series,...
Read more
- Advertisment -