Home Events Regatta First act of RCSW 2021 starts today at 11 am, in the...
EventsRegatta 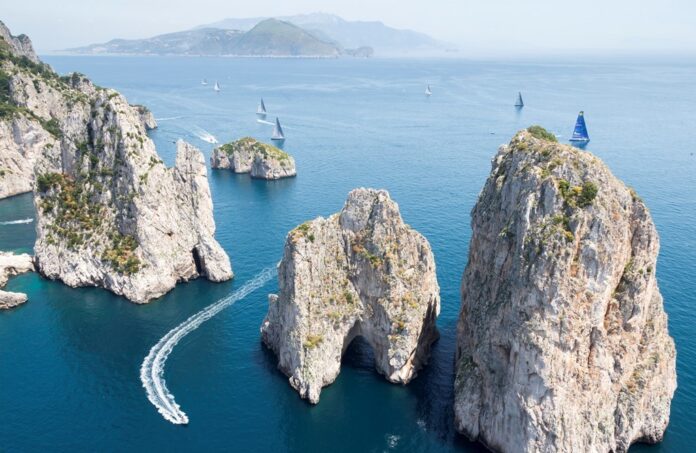 Registrations took place yesterday for the fleet of maxi yachts that will take to the water today for the first race of the Rolex Capri Sailing Week. The first warning signal will sound at 10:55 a.m. for the maxis who will do battle in two separate classes (Performance and Classic), with a joint start and the same course assigned.
The crews will compete for four days, with the Maxi Yacht Capri Trophy concluding on Friday 14 May.

The forecasts for the next few days indicate light winds from the south for today before a front moves in between Wednesday and Thursday, bringing waves of 3 metres and southerly winds of 20 to 25 knots.
At the end of the first series of races in Capri, the boats will move to Naples for the start of the Regata dei Tre Golfi, after which the combined ranking of all the races held will decree the winner of the Rolex Maxi Yacht Capri Trophy, the coveted prize offered by main sponsor Rolex.

Among those sighted on the docks and training on the water were the impressive Adriatic-based crew of Anywave, the Frers 63 captained by Alberto Leghissa (4 world titles, 3 European titles, 4 Italian titles, 1 Mediterranean title), who is joined by veteran Mauro Pelaschier in the role of tactician and co-skipper.

Roberto Ferrarese will be calling tactics aboard the 60-foot Blue Oyster, Andrea Fornaro aboard Vincenzo Adessi’s Mylius 60 Fra Diavolo, and Gabriele Bruni on the Swan 65 Shirlaf, owned by Giuseppe Puttini. “It is a pleasure to be back sailing in Capri” commented Bruni on his return from training yesterday, “I consider this to be one of the best regatta courses in the world, always very technical, breezy and spectacular. We’re sailing on a ‘grand old dame of the’; and Wednesday will be an interesting day, where our pretty considerable displacement could make a difference.”

Many will also be looking with interest to the performance of the Mylius 60 CK Cippa Lippa X, owned by Guido Paolo Gamucci, making her racing debut in the waters of Capri.

Prizes for the Capri regattas:
IMA Trophy – International Maxi Association Trophy for the top Maxi yacht overall;
Prizes for the top three finishers in each category.
Rolex Maxi Yacht Capri Trophy
The Rolex Prize is awarded to the top Maxi yacht in the combined rankings of the Regata dei Tre Golfi and all the races in Capri, with no discard available.

Yesterday at 6 p.m. the skippers’ briefing and official inauguration of the RCSW took place on a Covid-free island where the population is now fully vaccinated