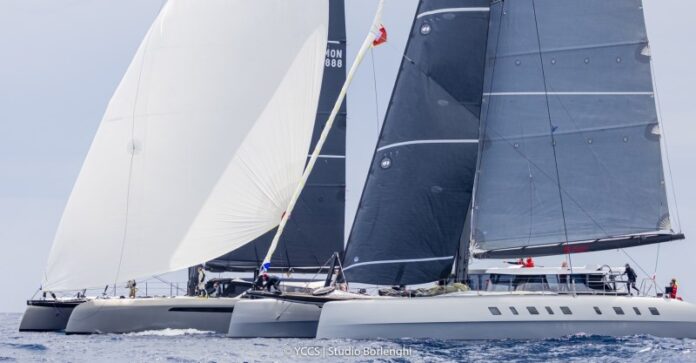 The 14th edition of the Loro Piana Superyacht Regatta got off to an auspicious start today, with a fresh south-easterly wind of 16 to 17 knots creating ideal conditions for today’s racing. The event, organised by the Yacht Club Costa Smeralda with the support of Loro Piana, is a symbol of the reopening not only of the world of international sailing, but also of the region of Sardinia that is home to the YCCS.

Perfectly on schedule at 12.30 p.m., the Race Committee headed by PRO Peter Craig sounded the start for the Multihull division, a completely new category introduced for this edition, with four catamarans ranging from 18.5 to 25 metres who battled hard right from the downwind start. The Superyacht division followed with a staggered start, with individual departures to ensure maximum safety during racing. After rounding an offset mark, the Superyacht fleet took the same course as the Multihull division, covering more than 30 miles, and including a clockwise circumnavigation of the island of La Maddalena, after having left the islet of Monaci to port, returning to the Golfo delle Saline and sailing back up the channel between the coast of Sardinia and the La Maddalena archipelago.

The first victory in the Multihull group went to R-Six, a 66-foot HH catamaran, after the 25-metre Allegra was disqualified due to a protest. Second place went to the Gunboat Highland Fling XVII, ahead of the Outremer 5X R Give Me Five in third place. Compensated times for this division are calculated under the new ORCmh system, specially designed to handle the characteristics of multihull yachts.

In the Superyacht division Missy, a 33-metre yacht taking part in the Loro Piana Superyacht Regatta for the first time, was followed by Claus-Peter Offen’s Wally Y3K – just 53 seconds behind in compensated time – with the Swan 115 Shamanna clinching today’s third place. The 100-foot Leopard 3 was the fastest boat on the course in real time but, after the application of compensated time, sits at the back of the fleet despite being just 6 minutes behind the winner. The close times around the course coupled with the smiling faces of the participants back on the dock spoke of a hard-fought race indeed.

Owner of the superyacht Missy: “It’s been a great day, fantastic day. The conditions were perfect. Everyone feels very relieved and pleased to be back on board the boat again, everyone involved is excited again!”

Missy’s Captain, Matt McKeon: “We started with quite a fresh breeze, it was quite shifty and gusty around the back of La Maddalena but it was a very good Sardinian race track, something we would expect from here. There were passing lanes, genuine ones, and you had to fight for your position at the end of the day. All the boats had good opportunities and we were very happy to have come out on top with the determination of the boss and the team to get the result today.”

The Southern Wind fleet gathered in Porto Cervo to take part in the SW Rendezvous and Trophy on the occasion of the 30th anniversary of the South African shipyard, sailed in a friendly and non-competitive spirit, concluding their journey at Cala Maiore on the island of La Maddalena.

Racing in the Loro Piana Superyacht Regatta continues tomorrow, with the start scheduled for 12.30 p.m. and winds of 10 to 14 knots from the southeast forecast.