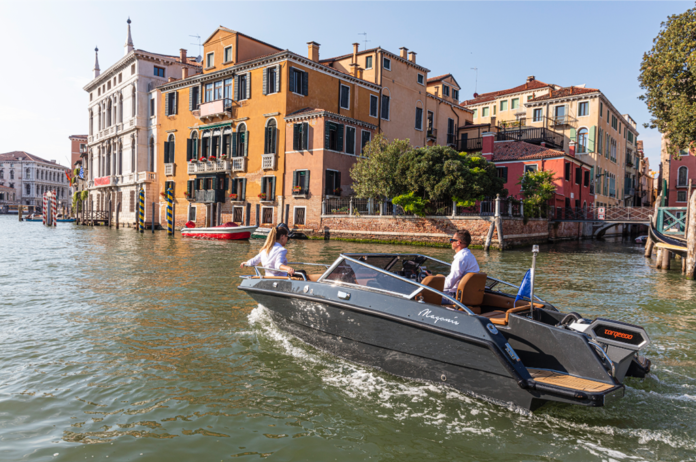 Combining comfort, efficiency and respect for the environment, with a keen eye for the details that make a boat instantly recognizable: this was the starting point that guided the creation of Wave e-550, the first model from the Italo-Spanish shipyard Magonis, which made its world debut in May at the Venice Boat Show 2021.

The shipyard, with its headquarters in Barcelona and production site in Sabaudia, Italy, has drawn on the different influences of the two countries. Catalan creativity and exuberance have been combined with Italian taste and technology to create a boat that, in its 5.50 metre length (4.96 m at waterline) and 1.98 metre width, has all the ideal comforts for an enjoyable day cruise, be it sailing on Lake Garda (with all routes permitted, including the ones on the upper lake, forbidden to traditional motorboats), in the sea of Capri or a quick crossing from Ibiza to Formentera.

With a depth of just 0.30 m, it is possible to venture almost to the shore in complete silence thanks to the electric propulsion. To dispel any misgivings about electric motors (nowadays, in the Tesla era, much less than in the past), here are the performances: 22 knots maximum speed and a range of 12 hours at cruising speed. The displacement of 335 kg highlights the vacuum infusion construction of the exclusive Light X Pro technology, developed by the Magonis team of engineers and designers.

Four electric propulsion systems to suit every owner
Motorisation, strictly outboard, comes in the shape of two authentic icons of electric propulsion: the Torqeedo Cruise from 4 to 10 kW (approximately the equivalent of 20 hp), or the new Mag Power 18.0 and 30.0, 18 and 30 kW respectively. The former (with a power of around 40 hp) guarantees the aforementioned speed of 22 knots, the latter a top speed of 16 knots.

On-board comfort and smart details
The layout of the deck spaces is based on the bowrider style, resulting in a bow area that can be transformed in an instant from a cosy dinette into an equally usable sunbed. In the cockpit, comfortable seating and a protective windscreen ensure comfortable and safe navigation for up to six passengers.

Magonis Wave e-550 has a number of solutions that are not usually found on boats of this size, starting with the instrumentation, wMediahich has been replaced by a suitably waterproofed 13″ iPad that owners can carry with them at all times. There is also a dedicated slot for charging smartphones, while music is provided by a 120 W Fusion system.

Even when it comes to price, the Magonis Wave e-550 manages to impress, considering the quality of its finish and its electric drive, which guarantees an excellent second-hand price over the years. Prices range from 33,485 Euro with the Torqeedo Cruise 4.0 RL to 68,900 Euro with the Mag Power 30.0, all including VAT.