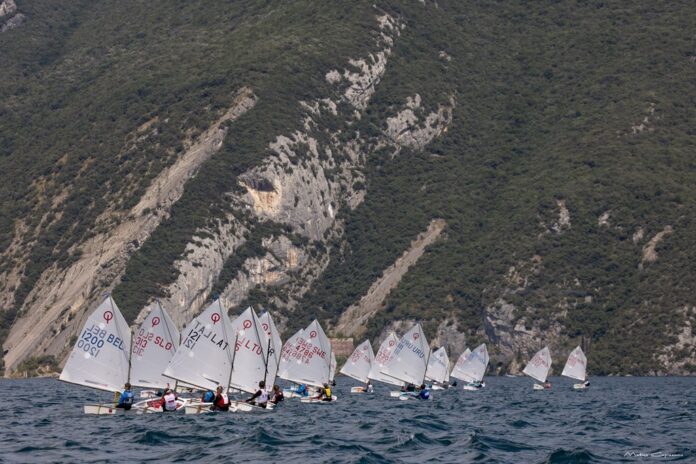 A typical Garda hour, well stretched and of constant intensity at 12 knots, kicked off the first day of official regattas of the 2021 Optimist World Championship, hosted by the Fraglia Vela Riva.

To emerge in the first edges of this World Championship were the athletes of the Brazilian team who, at the end of the first race of the World Championship, saw four of the five team members positioned within the top-five. Excellent debut also for home athletes Alex Demurtas and Lorenzo Ghirotti, respectively first and fifth in the heats to which they belong in Race 1. The other winners of the first race of the day were Fynn Olsen (USA, red fleet), Rocco Wright (Ireland, green fleet) and Alex Di Francesco Kuhl (Brazil, blue fleet).

The weather conditions remained stable during the afternoon, allowing the Race Committee to quickly start a new sequence of races and to bring to two, as scheduled, the total number of races scheduled for today.

The second test smiled at the sailors of the US team: Fynn Olsen, former American Champion 2021, hits the second consecutive victory, followed by Gil Hackel, silver in both races today in the yellow fleet. Thanks to today’s partials, the two American athletes currently lead the ranking after the first day, leaving behind the Irish Rocco Wright, in turn on equal points with the Brazilians Alex Di Francesco Kuhl and Lucas Cochi De Freitas, with the Ukrainian Danyil Mykhailichenko and the Thai Kan Kachachuen.

The first Italian rider in the ranking is Alex Demurtas (1-8 in the yellow fleet), eleventh overall, followed by teammate Lisa Vucetti (10-3 in the red fleet), fifteenth and with the same score as Alessandro Cirinei (6-7 in the green fleet). Lorenzo Ghirotti (5-12 in the yellow fleet) is currently 26th, while Adriano Quan Cardi (46-3 in the blue fleet) is 82nd.

The races will resume tomorrow at 13.00, with the second day of qualifying.

All updates on the regattas are published on the Optimist World Championship 2021 social pages and on the microsite at this link.

Please note that at the time of sending this press release they are still in progress and could change the general ranking, therefore all results are to be considered provisional.