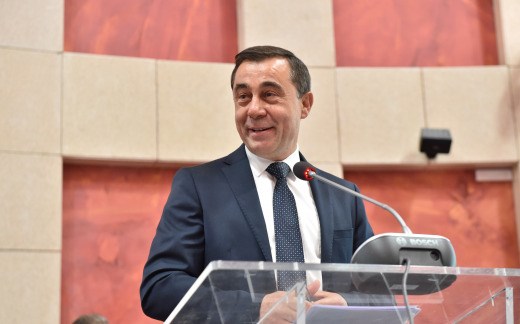 On his election, speaking of the race he said, “More than ever in this special context, the Vendée Globe has confirmed its status as a very top-level sporting event, with twists and turns and a breathtaking finale. These men and women and men gave us a real breath of fresh sea air and spray when we needed it most. They took us travelling on an adventure when we could not travel. They reminded us that the values ​​of solidarity and mutual aid stand above all others. They simply reminded us that this race is like no other, mixing courage, surpassing oneself and humility in the face of the elements to create this alchemy so unique to the Vendée Globe, classifying it as the greatest human adventure of modern times. And this did not escape fans around the world, whose fervor and enthusiasm largely contributed to the success of this 9th edition. Continuing on from my predecessors, as President of the Vendée and SAEM Vendée departments, I wish to be the guardian of the spirit of the race, of its values ​​and of its history which is inextricably linked to the Department of Vendée. I am already setting up a date with all Vendée Globe lovers on November 10, 2024 for the 10th edition which, without a doubt, will make us dream again! “


A long and successful career in the service of the Vendéens

First an SVT teacher then computer science at the Jeanne-d’Arc high school in Montaigu, Alain Lebœuf very early on became director of the Saint-Sauveur college in Rocheservière.

In 2011, he was elected Chairman of the Board of Directors of the Vendée public land establishment.

The following year, he was elected deputy for the 1st district of Vendée then President of the Departmental Union of Energy and Equipment of Vendée (SyDEV) and of SEM Vendée Énergie in 2014. In 2015, he was re-elected to the departmental elections in the new canton of Aizenay with Mireille Hermouet as a partner.