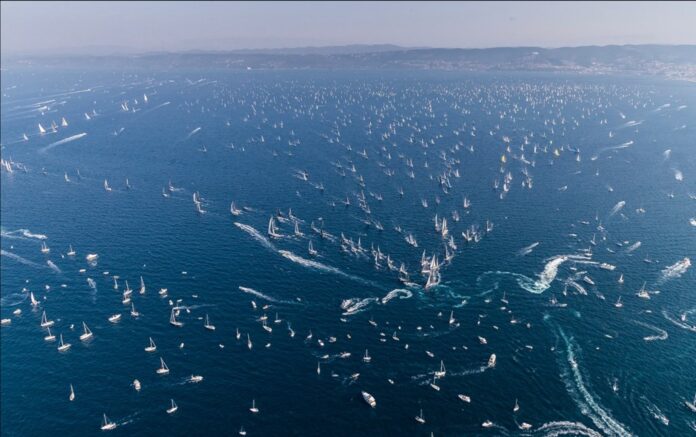 The state of health of the Mediterranean, the role of science diplomacy in supporting innovative and integrated policies for the protection of the sea, the circular economy in the nautical sector, the future of Port-Cities in the perspective of ecological economic impulse of the recovery plan, the key role of Trieste in international relations with Central Europe and with CEI countries also on the environmental front: these are the themes of the Barcolana Sea Summit, the first edition of the scientific dissemination and political analysis event , economic and social dedicated to the sustainability of aquatic systems, organized as part of the largest regatta in the world from 6 to 9 October 2021 in Trieste.

The guidelines of the event were presented this afternoon at the headquarters of the Port System Authority of the Eastern Adriatic Sea by the representatives of the institutions that support the event, at the end of the preparatory work of the past months. The event, in fact, is the result of a strong partnership between public bodies that have a fundamental role in the protection of the sea and the development of the city. In fact, Barcolana has obtained the collaboration and support of the Port Authority of the Eastern Adriatic Sea, the Coast Guard, the University of Trieste, the National Institute of Oceanography and Experimental Geophysics, the Central European Initiative, the FVG Region, the Venezia Giulia Chamber of Commerce and the Municipality of Trieste. Additional actors will be added in the coming weeks,

how much the protection of the Mediterranean needs an integrated approach between all coastal and non-coastal countries that are responsible for the rivers that flow into closed seas. A team effort – concluded Gialuz – that we want to represent as a whole, highlighting the commitment of all and the need for sustainable development, also based on gender equality, a theme that will cover the entire Barcolana Sea Summit, with the enhancement of the role of seafarers in the scientific, institutional and business world “.

The event will take place at the new Trieste congress center located in the Porto Vecchio. Barcolana has chosen this space with the aim of creating added value for the city, promoting the TCC – Trieste Convention Center and the advantages of this important infrastructure to the participants and the international public.

The statements of the representatives of the local institutions that support Barcolana Sea Summit.

Zeno D’Agostino, president of the Port System Authority of the Eastern Adriatic Sea

“We strongly believe in the development of the blue economy which will be a fundamental part of the sustainable strategy for the ports of tomorrow. This approach involves major investments from the point of view of research and innovation. Events like this are essential to get an idea of ​​the state of the ‘art: a series of issues will be dealt with which will become the pillars on which the future of the ports of Trieste and Monfalcone will be based in the coming decades “.

Fabio Scoccimarro, Regional Councilor for the defense of the environment, energy and sustainable development

“With the spirit and the awareness that Friuli Venezia Giulia aims to be the pilot region of the” European Green Deal “with the Nipoti project, reaching energy neutrality at least 5 years before 2050, I thought about the” States General of the Environment and Climate of the Adriatic and Central Europe “asking for the collaboration of the CEI. This is because the Environment knows no administrative boundaries and I believe that the protection of the Environment must now be a priority for all European states. with the road map leading to the States General in autumn 2022, of which the Summit in Barcolana will be the first important step, the goal is to share good practices, ideas and sensitivity towards ‘Environment.This is even more true today which is the “Day of ecological debt” (Earth Overshoot Day), which is the day estimated by scientists when the Planet has exhausted the natural resources available for this year and begins to exploit those of 2022 “.

“Barcolana Sea Summit allows us to further expand the themes of the Barcolana event, bring an even wider audience closer and highlight strategic development issues of our territory. I find it important that the Sailing Company of Barcola and Grignano has chosen Porto Vecchio as its location of the event: together we will further enhance the TCC, Warehouse 26 and this new part of the city “.

“The health of the sea is one of the main missions of the Port Authorities – Coast Guard; to protect the marine environment and its ecosystem it is important to raise awareness among citizens and work in synergy with the institutions in the various territories. Barcolana Sea Summit is an opportunity of reflection, promotion of good practices and joint development of new activities, which involves us due to our exclusive ownership of the maritime function for the civic uses of the sea, in this specific sector also directly reporting to the Ministry of ecological transition “.

“The Barcolana Sea Summit is a great opportunity to bring together the ministers of the environment of the CEI countries in Trieste, dealing with the theme of the sea. The goal we share with Barcolana and the Regional Environment Department is to work as a team and to start from Trieste an important message of the need to share on environmental issues: as Barcolana says, the sea belongs to everyone and is forever, and water has no borders. Reason together on the best examples of water protection applied in the Countries CEI, on joint protection activities, a subject extremely dear to the Coast Guard with which we are collaborating, are the basis of our commitment in this event, in which Trieste will be able to be the protagonist “.

Roberto Di Lendarda, Rector of the University of Trieste

“On this occasion too, the University of Trieste demonstrates its central role in scientific research and in the transmission of knowledge. The University is committed to consolidating a strategy of strong collaboration with scientific, economic, political and social institutions, including in an absolutely strategic sector such as the protection of the sea. The University has been involved for some time in this field also with the concrete prospect of soon activating the master’s degree in Marine Biology in synergy, among others, with OGS “.

Nicola Casagli, president of the National Institute of Oceanography and Experimental Geophysics – OGS

“The sea and its ecosystem represent a fundamental resource for life on Earth and at the center of OGS’s activities are the” blue research “and the dissemination of knowledge to increase environmental awareness. We have therefore enthusiastically joined the Barcolana Sea Summit, actively collaborating to identify the topics of greatest interest and with a strong impact on our society “.

“The European Commission with the Stella di Mare Mission is launching an ambitious project for the regeneration of seas and oceans. Education and emotional involvement of citizens, digitalization (digital twin of the Mediterranean), zero pollution, decarbonisation and protection of biodiversity are the priorities of this new blue green deal “.

Antonio Paoletti, president of the Venezia Giulia Chamber of Commerce

“The Venezia Giulia Chamber of Commerce has been supporting and operating within the Blue Economy for many years with projects in favor of companies. Economic development and environmental protection see us involved at the forefront in international projects that pursue economic growth and respect for the environment. In particular at the regional level through the Fvg Coastal Action Group together with the Region and the trade associations, we are working alongside operators in the fishing and aquaculture sector in the research and implementation of interventions aimed at creating an increasingly sustainable system, respectful of the marine environment and the territory “.