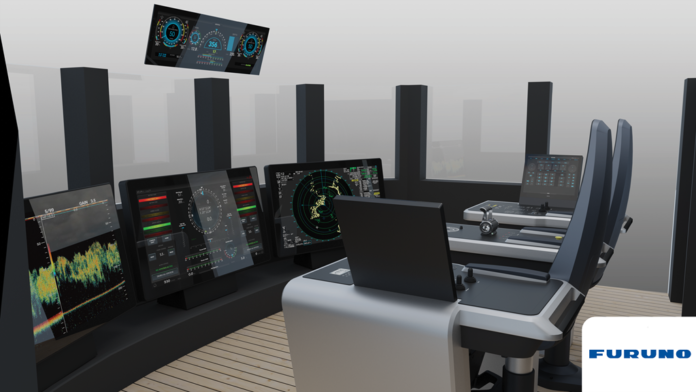 The latest generation of Furuno consoles designed for commercial yachts of more than 300 GT offers the ultimate in integration and design for an ultra-modern and easy-to-use deck.

The new F-Bridge is the emblem of simple, safe and efficient navigation.

The bridge consists of a wheelhouse, with two consoles and a central armchair, and three 55″ Hatteland 4K monitors. The solution is completely customizable and can also include multiple pilot seats or multiple monitors.

The two ergonomic and modular consoles, placed on the sides of the comfortable pilot’s chair, contain all the controls and tools necessary to steer the ship. Operational and navigation data are displayed on the Hatteland 55″ self-standing displays placed on the floor in front of the wheelhouse; the large size of these displays allows you to easily create multiple pages to display multiple functions on the same display.

The 55″ self-standing Hatteland monitors are type approved for Furuno FAR series radar and for ECDIS Furuno FMD-3200BB. If the dashboard configuration allows it, a 45″ ultra-wide display can also be provided to be installed overhead to always have conning data or engine and monitoring data available.

The governance of all the functions of this modern integrated bridge will be guaranteed by two custom trackballs that, thanks to the Universal Control Concept, will be able to govern the radars (X &S), the ECDIS (two in case of paperless configuration), the TZ Professional by MaxSea, the AMCS system, the CCTV system and all the other systems that the customer wants to integrate into the F-Bridge.

This modern arrangement of the ship’s components has made it possible to create a unique, versatile and innovative system based on the “walk around” bridge principle, that is, on the possibility of moving freely all around the control deck, even around the wheelhouse and self-standing monitors.

Hatteland HD55T22 monitors are Generation 2 series LCD displays with LED backlight, dimmer and multipower technology as standard. These are multi vision displays, so you can view up to 4 sources in full HD in a single screen. The state-of-the-art display technology with Optical Bonding and, as an option, the touch screen, allow good readability even in unfavorable conditions.
The new mega yacht deck system can also integrate all the automation information of Bӧning and all the main controls are available in the side panels.

Freed from the constraints of racing and rating considerations X-Yachts could explore every avenue in pursuit of their latest and best ever...
Read more
Technology

XENTA at the Cannes and Genoa Boat Shows with two innovations: X-AID and X-SELF

The incessant research and development activity that has always characterized XENTA, has led the company - leader in the design and construction...
Read more
Technology

The electronics on board the 38-meter Grande Trideck - the revolutionary and largest model of Azimut Yachts with an extra deck, in...
Read more
Technology