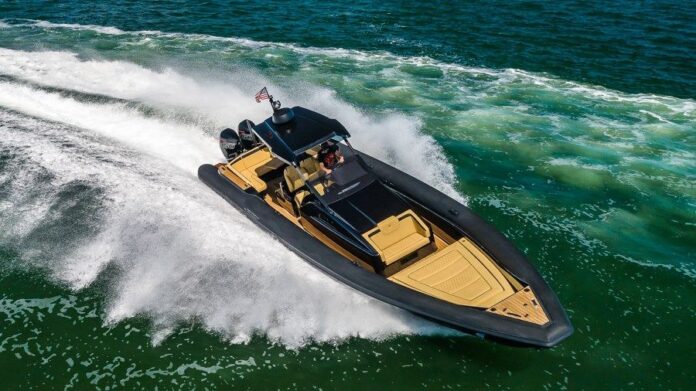 Technohull is getting ready to participate in style at the 2021 Olympic Yacht Show (1-5 October 2021). In fact, eight models will be on display: two Omega 47, four Explorer 40 with different configurations, both inboard and outboard, a 38 Grand Sport and a unit of the brand new T7.

In addition, visitors will have the chance to visitnTechnohull’s lounge and customer service point located at Olympic Marine in Sounio, one of the most important marinas in Attica, just 30 minutes away from Athens International airport El. Venizelos and 45 minutes from downtown Athens.

T7. The Game Changer
The secret lies in the boat’s seamless blend of top performance with dimensions usually only seen on larger craft. Its 3.13m beam gives the space for wider decks, but even a cursory glance is enough to confirm that this is a Technohull, with its crisp aesthetic and sporty lines. Those jet-black tubes, carbon fibre detailing, and deep, luxurious seating finished with hand stitching are all unmistakable.

The layout is flexible and allows for two ergonomic pilot seats facing the central console, where touchscreen controls put every system aboard at your fingertips. A clever seating arrangement in the aft offers ample seating space. Further lounging at the bow is in the form of a delta sunbed that can easily be turned into an even larger one.

Naturally, there’s teak decking, gleaming stainless-steel work and atmospheric LED lighting that can bring the deck to life with friends. So too a top-quality Fusion Apollo entertainment system, a fridge for refreshments as well as a deck shower. Combining comfort and functionality, the T7 offers everything that a cruising day demands of the driver, while spoiling the guests as well.

And while the 65mph top speed of the boat shouldn’t leave any room for disappointment, it is the supremely stable handling that is this hull’s real hallmark. Another awesome feature is that the boat stays on plane even at 9mph.

38 Grand Sport. Top Speed. Absolute Control
Technohull 38 Grand Sport represents a step up in terms of aesthetics and interior finish. Athletic lines betray the boat’s top speed of over 100 knots, but they do it justice at any pace. Long, at 12.1m, and slim, with a jet-black hull and tubes, the 38 Grand Sport will turn heads in any port it enters. It contrasts beautifully with the boat’s hand-stitched premium quality upholstery in rich orange, crimson, or any colour you choose. The options list is lengthy, and includes an elegant carbon T-top for extra protection.

Both the sport and the standard versions offer multiple social areas, with a huge sunpad in the bow, double seat ahead of the steering console and deep twin driving seats. The stern can be configured in several different ways, with the sport version offering a second row of its proprietary shock-mitigating bucket seats and two broad stern seats, while the standard boat goes for a full-beam seat and two luxurious sunpads. Both put the emphasis on access to the water, thanks to their notched transoms.

Twin Mercury Verado 300s to twin 450R are proving the most popular propulsion package to date, in line with the family appeal that the 38GS exerts. Out-and-out sport mode allows the transom to take up to three Verado 450 V8s for speeds over 100 knots, but it is a really flexible platform giving owner’s a host of engine choices.

Explorer 40. The Ultimate Day Boat
A range of inboard and outboard propulsion options push the athletic Explorer 40 to a top speed of more than 75mph. For peak performance, choose a pair of Mercury 450 motors toting an awesome 900 total horsepower. You can mount up to two outboards on the notched transom, or go inboard with two of Volvo’s new V6-440 hydraulic drives, packing 880hp.

Don’t think for a moment that the technical capacities of the Explorer 40 mean that comfort has been neglected – far from it. American and European clients alike have commented on the spacious decks, extensive lounging areas and convenience of having a day heads and double bed down below.

There is a sunpad and a deep, comfy seat at the bow, while owners can choose from more seating or sunbeds aft. There is a fridge, wet bar and espresso machine, high-end Fusion entertainment system and the choice of a sleek hard top or a simple bimini for shade. It all adds up to a formidable family cruiser.

Omega 47. Luxury in full power
Technohull’s breath-taking new Omega 47 seamlessly combines superyacht finish with the sporty performance that has made the Greek brand famous. Developed out of the popular Omega 45, the new flagship is slightly longer and broader in the beam to offer a flexible deck space and a superbly comfortable interior.

You can feel the extra room on deck, where several configurations are available, including extra helm seating, a cockpit table and additional sunpads for lounging. And in the cabin below, the result is a striking amount of volume for a fast RIB. It’s enough for a luxurious double V-berth and a full-height shower and heads compartment.

The cabin receives ample natural light via sleek windows in the deckhead, but it also benefits from expert LED lighting, which subtly emphasises the superyacht finish. Quality leather, exotic veneers and premium Corian combine to create a sense of real luxury. It is a practical space, too, with plenty of storage for clothes and other items below.

Of course, speed and raw good looks are as much a part of the new Omega 47’s DNA as they are all Technohull boats. Versatile transom design gives the owner great choice when it comes to propulsion. Options include 2 x 600hp Mercury Verado outboards – so new that they have barely hit the water. These technical wonders are the world’s first V12 outboards, and feature a steerable underwater gearcase, saving space on deck with fixed powerheads. Otherwise, there’s room on the transom for up to 4 x 450hp Mercury Racing motors, or diesel-powered inboards. Performance can exceed 80 knots, making the Omega 47 a true sports boat.