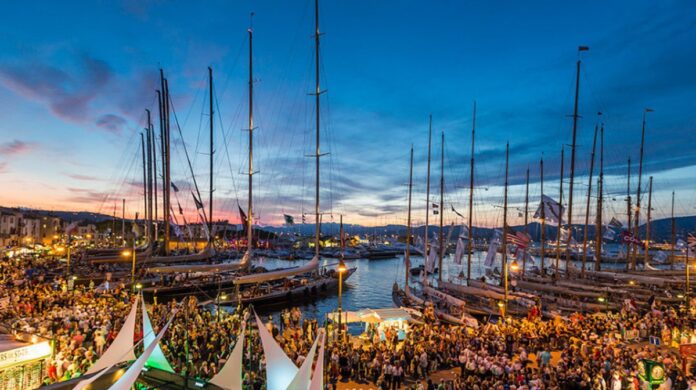 A festive atmosphere will float this year on the quays and in the Gulf of Saint-Tropez: the year 2021 is to be marked with a milestone in the history of this extraordinary event. In 1981, the Club 55 Cup was born, now La Nioulargue, and already carrying the DNA of Les Voiles: a classic boat and a modern boat. In the wake of this epic challenge, the most beautiful boats in the world, ultra modern or centuries old, have continued to meet in the waters of the Gulf ever since to hoist the Voiles de Saint-Tropez high at the end of the Saint-Tropez season.

It was on September 29, 1981 that it all started, following a bet intended to defend a sailor’s honor between Pride, the American Swan 44 of Dick Jason, and Ikra, the 12M JI skippered by the French Jean Laurain.

The challenge could not be simpler: departure at the foot of the Tour du Portalet, in front of the village of Saint-Tropez, to turn the mark of the high bottom of the Nioulargo (or “nid du large” in Provençal) and arrival at Pampelonne in front of the “Club 55”, for a lunch in the shade of the Tamaris trees with Patrice de Colmont, who is the conductor. If, for the anecdote, Ikra won in front of Pride, for the history, this challenge gave birth to the “Club 55 Cup”. And from this improbable duel is born a unique event, a special gathering that has been racing for 40 years smaller racing boats with prestigious Maxi yachts, ultra sophisticated prototypes with famous classic yachts, renewing, without having it. particularly sought after, with the rich maritime past of Saint-Tropez.

The incomparable and inimitable Nioulargue will thus exist for fifteen years, mixing the greatest sailors with crews of all caliber, world champions, ocean racers, Olympic medalists, America’s Cup winners with crowned heads. or celebrities who came incognito and with ease. Once the nautical games are over, the evening goes on in part with bowls, anchovies and other festivities sometimes spontaneously improvised in the port, on the Place des Lices or in the surrounding area.

And if we find at each edition this same state of mind imbued with fair play and this communicative happiness, each year of Nioulargue also knows its stroke of brilliance, its miracle or its appearance, like the Maxi, Class J, three-masted, schooners or Auric Cutters, alongside the futurists Wallys.
After so many years of success and recognition, the sixteenth edition is in mourning following a collision between the schooner Mariette and the 6M JI Taos Brett IV. The test was put on hold until 1999, when, under the leadership of the Société Nautique de Saint-Tropez, the Voiles de Saint-Tropez was born.

A new format on the water, on land, a village to imagine

Taking up a maxim dear to the Société Nautique, of which he has been president since 2020, Pierre Roinson sums up the state of mind of Les Voiles: “When we celebrate an anniversary, we are often asked the same question: but what So will there be something special this year at Les Voiles?

Well the answer is simple: each edition of Les Voiles is exceptional! “. A certain number of novelties will mark this edition, and in particular the new format of the event over two weeks – like last year – but with the entire fleet of traditional yachts in the first week, at the same time as the modern boats up to 60 feet (18.28 meters). The second week will be exclusively reserved for Maxi Yachts which will race from Tuesday 5 to 9 October and will benefit from an additional day of racing compared to last year: that of Saturday.

This two-week organization has an advantage that is appreciated by both runners and the public: the possibility of giving all the starts in front of the village of Saint-Tropez. For the safety of all on the water, an exclusion zone is planned, and the sequencing of the starts leads the race committee, placed under the authority of the Principal Race Officer, Georges Korhel, to create a “hall waiting ”at the bottom of the gulf for the traditional sailboats while the departures of the modern boats are given.

On land, even if the certainties concerning the sanitary instructions at the end of the summer are still dotted, it is a village full of life and conviviality which is desired by all, and for which the organizing committee spares no effort. not his efforts “Our first commitment is to ensure the safety of all” specifies Sabrina Coccia, in post at the management of the Société Nautique de Saint-Tropez since April “Not only of our permanent teams , but also the hundreds of volunteers involved in the organization on land and on the water, our partners, our suppliers, and of course, that of French and foreign competitors. We also want to set an example for the public by implementing government and prefectural instructions. Our goal is to guarantee excellence, and that each of our partners find their place and be able to benefit from the corresponding visibility thanks to the extraordinary sounding board that are the Voiles de Saint-Tropez, with serenity and in the best possible conditions. “