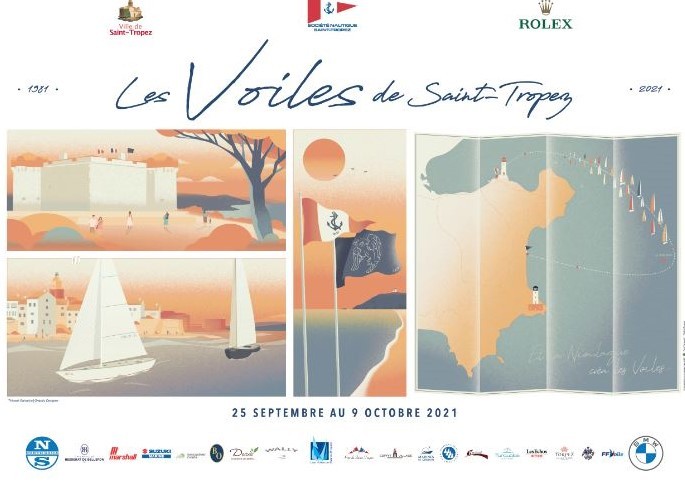 In accordance with its marvelous reputation for elegance, festivity and sport, the 23rd edition of Les Voiles de Saint-Tropez opens today.

Following on from a highly successful 2020 edition, despite a restrictive pandemic context and thanks to the commitment and responsiveness of all the Société Nautique de Saint-Tropez’s teams, its President Pierre Roinson and all their partners, Les Voiles is reconnecting with its public audience and the festive spirit now synonymous with this major nautical and autumnal meet in the Mediterranean.

Boasting an array of entertainment and all manner of celebrations, the public and the thousands of sailors who have arrived on site from the four corners of the globe will once again be united both on land and at sea, echoing the days of the Nioulargue, which celebrates its fortieth anniversary this year*.

Now spanning a full two weeks, aficionados of sleek hulls and beautiful sails, Modern and Classic yachts, will get the chance to feast their eyes on the unique scene that epitomises marine splendour.

Indeed, for the first week, from 25 September, Les Voiles is playing host to the classic yachts as well as the fleet of modern boats measuring up to 20 metres in length.

The second week, from Sunday 3 October through until Saturday 9, will be solely devoted to the very large modern craft known as the Maxis, which will also benefit from the extra week of racing.

Two weeks of showstopping, festive fun to stretch out the summer once again in Saint Tropez.

Two weeks with a very distinct character!
To everyone’s delight, Les Voiles Village opened its doors this Saturday 25 September in the presence of Mrs Sophie Cluzel, Secretary of State in charge of people with disabilities, who will be inaugurating Saint Tropez’ new lifeboat for the Société Nationale de Sauvetage en mer.
A somewhat subtle version of itself last year, due to Covid, the new format for Les Voiles will be presented to the general public in all its glory this year, with a clear separation of genres between weeks one and two. From Saturday 25 September to Saturday 2 October, over 200 classic sailing yachts of all sizes, some in excess of 40 metres, will come together with the modern boats measuring up to 18m28 in length. Then from Sunday 3 through until Saturday 9 October, the port of Saint Tropez will be reserved exclusively for a fleet of around 50 modern giants for the second chapter of the event: Les Voiles Maxi Yachts. The main attraction of this new format for the general public is the opportunity to witness all these splendours making headway under sail from the wonderful vantage point of the Etienne d’Orves jetty, where they will have a front row seat to marvel at the intensity of all the race starts from nearby Le Portalet.

Sunday’s Autumn Cup run by the Yacht Club de France
The Yacht Club de France’s Autumn Cup is a famous race connecting Cannes and Saint Tropez and it will provide a delicious taste of what’s to come at Les Voiles. Heralding the start of festivities in Saint Tropez, every year, dozens of yachts set sail from Cannes and its ‘Régates Royales’ bound for the major festival of sailing in Saint Tropez. Making their grand entrance under full sail at the far end of the bay and the Tour du Portalet by way of a conclusion to the 21-mile race, it is always a magical moment of high drama, especially so in the easterly wind forecast for tomorrow.

Monday: a wonderful introduction to proceedings
Over 130 modern yachts, split into 5 groups duly listed in IRC Classes B, C, D, E and F, will join the fray on Monday. Enlightened amateurs or professionals with backgrounds embracing Olympic sailing, offshore racing or the America’s Cup, there is something to delight one and all in the sumptuous setting of the bay, particularly now that all the categories will have the opportunity to start out from the port of Saint Tropez itself.

Classic yachts in the starting blocks
With Monday traditionally devoted to registration, the Classic yachts will get down to action in the bay of Saint Tropez this Tuesday. Featuring nearly 80 traditional boats in all, with 21 sailboats aged over a hundred, the fleet will do battle out on the water in the wake of the Bermudan yawl Sky, launched in 1890 with some 131 years of sailing under her belt. The Grands Tradition category, which includes some boats with an LOA of more than 40 metres, boasts no fewer than 12 entries ranging from schooners to ketches, cutters and yawls carrying the most spectacular gaff or Marconi rigs.

*The Club 55 Cup was created in 1981 and went on to become La Nioulargue, which already made up the DNA now familiar to today’s Les Voiles: a classic yacht and a modern yacht. In the wake of this epic challenge, the most beautiful boats in the world, either ultra-modern or a century old, have continued to come together in the waters of the bay for Les Voiles de Saint-Tropez, which rounds off the Mediterranean racing season in style.