HomeSailingPersico F70, the adrenaline of flying on the hypercar of the sea
Sailing 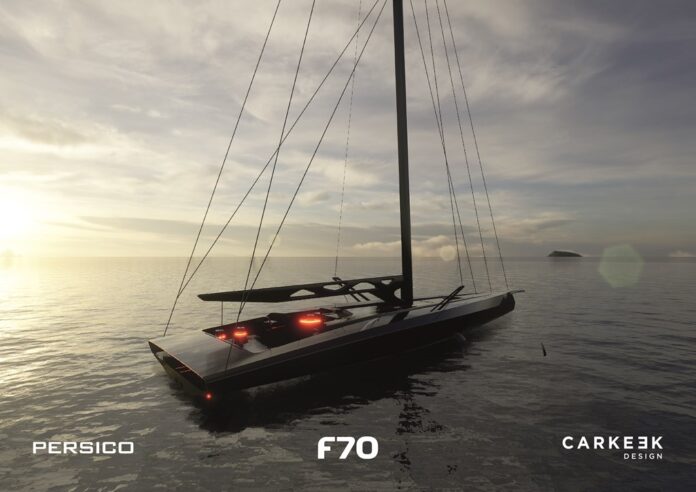 Genesis of a maxi foiler that is reductive to define futuristic. Pressmare.it talked about it with the project managers at the Monaco Yacht Show.
by Giuliano Luzzatto

For those who deal with sailboats, strolling on the docks of the port of Monte Carlo on the occasion of the Monaco Yacht Show is a bit like the first time on New York’s 5th Avenue … overseas it is dominated by skyscrapers, in the Principality by motorized megayachts . In the midst of the state of the art of this world for a few, there is the opportunity to personally meet important names in yacht design and shipbuilding. And this is how at the Persico Marine space I had the opportunity to meet one of the designers of the moment, Shaun Carkeek – he is from Cape Town but his Carkeek Partners studio is strategically based in Palma de Mallorca – together with the president of the shipyard. , Marcello Persico and Daniele Mazzon of Pininfarina, who already designed the interiors of the Wallycento Tango, built in carbon by Persico.

With Shaun Carkeek (right), Daniele Mazzon (left) and Marcello Persico (back in the center) at the Monaco Yacht Show

My curiosity, however, immediately went to investigate the Persico F70, a mini maxi of 21 and a half meters full foiling that Persico Marine had announced in March, in full “America’s Cup lust” with an extremely emotional clip that deliberately made the mouth water for more information. Let’s face it, after seeing the AC75s fly in Auckland “everything else is over” including the flying catamarans of the previous edition of the Cup. The idea therefore came at the right time, the result of the partnership with Shaun Carkeek, whose 360 ​​° experience on racing boats is widely known: the winning Fast40s are from his study (they are 40-foot High Performance Racers, very similar to TP52s and in some ways more advanced,

First of all, I learned that the proposal has received a lot of appreciation and some potential owners have immediately requested more details, even if construction has not yet started. It is a boat that is not defined as sexy, but between desiring it and deciding to own it, the step is a little longer than normal, because in this case you enter a territory that is still little known. If on the one hand a spectacular cafe racer, I find no more apt definition, as the F70 promises adrenaline than a hypercar, on the other hand, doubts may arise as to how much you will want to use it for short cruises or offshore regattas.

“We have two very interested owners – confirms Marcello Persico – but they would like to share such an innovative adventure with other yachtsmen”. In fact, building a boat of this kind is a strong declaration of intent, having other adventure companions makes the operation more attractive, also because it would be already experienced owners, who own other yachts.

The boat is fully defined down to the smallest detail, ready to be built. My first curiosity concerns the foils, which were deliberately hidden in the video. Would there have been an arm with winglets like those built by Persico for all AC75s or a more “traditional” shape? Carkeek immediately satisfies my curiosity: they will be foils derived from those of the IMOCA 60, the boats of the Vendée Globe, but assisted by the elevators on the rudder blade, so that the boat (equipped with canting keel) can fly completely already with 10 knots of wind without having to lean on the leeward part of the hull (also due to delamination on some IMOCAs). The design of the foils, completely retractable to be able to moor the F70 normally, makes use of the same CFD and VPP software used for the IMOCAs and the AC75s. Add to this the unrivaled experience and technological level of Persico Marine.

For its part, Pininfarina, with the wind tunnel, virtual reality simulation tools and all the technology created for the automotive sector, has contributed to creating a unique piece of art and technology, in addition to the interiors, almost science-fiction in their simplicity, which is accessed from a double entrance forward of the helmsman’s position, which is very reminiscent of the cockpit of an AC75.

The flight on the foils will be ensured by an electronic management that will allow perfect control and a real easy sailing experience, with a crew of between 2 and 4 people, which can increase to 8 for offshore racing. The small crew and the ease of handling are, in my opinion, the focal point that will allow this boat to see the light in the near future.

The Persico F70 will be built in high modulus carbon prepreg, with a Nomex and Kevlar sandwich core, for a total weight of 10 tons. The mast, 30 meters high, will be rotating and will carry a 190 sq m mainsail, a 145 sq m jib is foreseen at the bow while at carrying speeds the apparent wind could allow the use of a very flat 270 sq m reacher. Since the boat is truly dual purpose, also allowing for pleasant displacement navigation with light air, a gennaker of over 270 square meters is foreseen that will be walled up on the bowsprit.

I believe that such a “toy” cannot go unnoticed, personally I can’t wait to start construction and I would be curious to be able to carry out a test at sea to experience the emotions of the lucky owner.