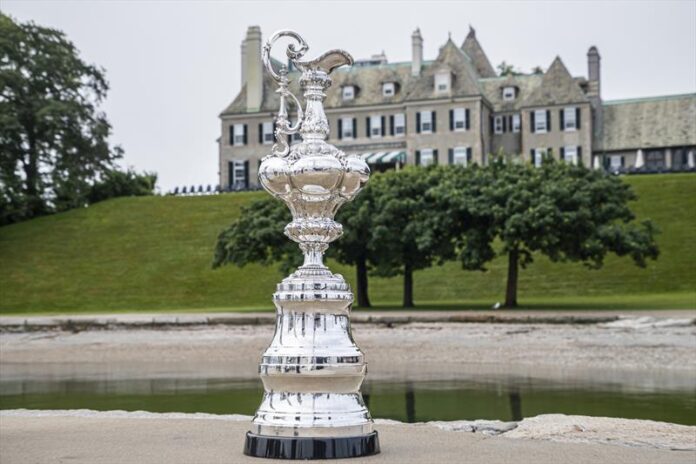 Just under four months after announcing that they had jettisoned American Magic, their team from the 36th America’s Cup, New York Yacht Club has done the same with their replacement.

Earlier today, it emerged that Stars+Stripes had also been given the push by the Club. No statements as to the reason have been made by the Club or team.

On July 24 July the New York Yacht Club announced that they had decided to have a relationship, with one of the late entries for the 2021 America’s Cup, Stars+Stripes, and for that team to be its representative for the next America’s Cup.

“To bring together the best American sailing talent, the Stars+Stripes team founded by members Mike Buckley and Taylor Canfield, the reigning Match Racing World Champions, will join the New York Yacht Club’s campaign for the 37th America’s Cup. The legacy of Stars+Stripes’ campaign for the 36th America’s Cup includes numerous key components and relationships that will contribute to a successful Cup campaign,” the Club said in a statement announcing the change-out.

Today’s move has come as a complete surprise to Stars+Stripes management, who were due to have meetings later this week with the club, covering sponsorship and finance progress.

Also out of the loop with today’s revelation, were their former team American Magic. We spoke off the record to both teams earlier today.

More curiously the Club, which held the trophy for 132 years, issued a Challenge and Protocol of its own in early May 2021. The Challenge as unexpected, and was made ahead of the entries opening for the 37th America’s Cup. The Challenge was not welcomed by defender, Emirates Team New Zealand, and was the move was later embroiled with some controversy after flawed moves were made to unseat the Royal Yacht Squadron Ltd as the first accepted challenger.

At that stage, May 2021, it was widely expected that NYYC would continue with American Magic, which despite their spectacular capsize on Day 3 of the Prada Cup had been performing well, and was the only Challenger team to defeat Cup defenders, Emirates Team New Zealand in December 2020’s America’s Cup World Series regatta.

The reasons for NYYC dumping one of the three “super teams” from the 36th America’s Cup were never revealed, and the decision to run with Stars+Stripes surprised many.

Led by Mike Buckley and Taylor Canfield, Stars+Stripes represented a fresh face in the America’s Cup, and may have been able to qualify for some exemptions, as an “emerging team” for the 37th America’s Cup. The team had also recently announced the signing of sponsor Ralph Lauren.

The New York Yacht Club has long hankered for the America’s Cup to return to more conventional monohulls, and was also believed to have reservations about the possibility of Saudi Arabia being the venue for the 37th America’s Cup. Emirates Team New Zealand were due to make an announcement on the preferred venue on September 17, but deferred on that date after the preferred option Cork, Ireland requested another six months to consider a feasibility study on the Cup hosting. Currently five venues are believed to be under consideration, being two in Spain, Ireland, Saudi Arabia, and with New Zealand as a remote possibility along with and undeclared venues. Over the last few weeks as the world emerges from COVID-19 lockdown measures there is a possibility that other options may emerge.

Further statements are expected from Stars+Stripes and the Club.