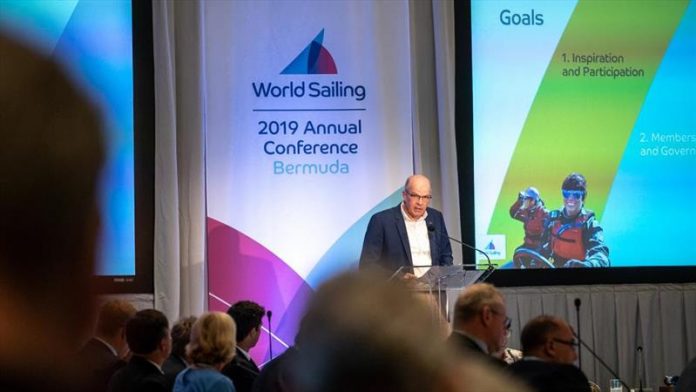 The authoritative Olympic and Commonwealth Games daily newsletter, InsideTheGames.biz is reporting that World Sailing hoping to be thrown a financial lifeline from the International Olympic Committee, now that the payout from the Tokyo2020 has been delayed, until the games have actually been held.

A senior World Sailing official has called on the International Olympic Committee (IOC) to advance the organisation its share of the Tokyo 2020 Olympic Games revenue after admitting the postponement of the event had worsened the governing body’s precarious financial situation.

World Sailing vice-president Scott Perry told insidethegames pushing back the Games until 2021 “has made our financial challenges more acute” and said the IOC had not yet indicated that an advance would be forthcoming.

The Games being postponed by a year has placed additional pressure on International Federations, particularly those who rely heaviest on the payout from the IOC to survive.

Federations have also been left with an uncertain financial future because of the COVID-19 pandemic, which has sparked a near-total shutdown of sport across the world.

The IOC, which refused to answer questions on Tokyo 2020 payments last week, paid out a total of $520 million (£420 million/€476 million) to International Federations after the 2016 Olympic Games in Rio de Janeiro.

The money is distributed using a system where federations are ranked according to their audience and size.

World Sailing, which sits in the fourth group of federations alongside the likes of canoeing, fencing, handball and wrestling, received $12 million (£9.7 million/€11 million) from the IOC for Rio 2016.

The London-based worldwide governing body had forecast an Olympic dividend of £12.24 million ($15.1 million/€13.9 million) from Tokyo 2020, which accounts for some 47 percent of expected quadrennial revenue.

It is not clear how much Federations stood to receive from the IOC for Tokyo 2020 and it has been suggested the amount could be less or around the same as Rio 2016 owing to issues caused by the coronavirus pandemic.

Earlier Perry had given an interview to Mikkel Thommessen of Danish sailing magazine Seil indicating (allowing for the accuracy of auto-translation) that the world body had some serious financial challenges. Click here to read the full interview – click on the appropriate icon for a auto-translation.

World Sailing has held two Board Meetings are believed to have been held in the last two weeks, the last being earlier this week, where the financial situation of the World body was the main topic.

From information given at the World Sailing Council Meeting and Annual Meeting held last October/November in Bermuda. World Sailing was forecast to have just UKP35,000 in the bank at the end of December 2019. The organisation had been battling a worsening financial outlook for most of last year, and the forecasts presented in Bermuda showed that in a “worst case” scenario, the world body had a deficit of UKP1.30million in August 2020.

That was immediately before the first of two instalments of a payment from the IOC (made to all participating sports, which provide 60% of the organisation’s income) for the period 2020-2024. The other income sources include subscriptions from Member National Authorities and sponsorship income from various sources. With the cancellation of some events and maybe more to come, it is likely that the expected sponsorship will not be realised, acerbating World Sailing’s parlous financial position.

It was claimed the UKP1.30million deficit was the result of non-recurring expenses of UKP1.7million, spent in the period 2017-2020.

Responding to a question made towards the end of the November 2019 Council Meeting, Perry (a long-standing WS Director) disclosed that going into the current quadrennium World Sailing had UKP600,000 in the bank plus the 2016 Olympic payout of UKP9.7million for a total of UKP10,300,000 cash assets.

In the management accounts presented in November, it was stated that revenue from the 36th America’s Cup and The Ocean Race had been taken into account, without saying for which year.

With the 20 year lease was up on the World Sailing HQ in Southhampton, in 2017, the world body undertook an evaluation of the options and settled on Paddington, London one of the most expensive commercial cities in the world. At that point World Sailing had a major four-year sponsorship with Gazprom which pumped UKP4million onto the top line of World Sailing. Unfortunately, the multinational energy corporation headquartered in St Petersburg, Russia, pulled the sponsorship after one year, having a major impact on the bottom line for World Sailing. While some additional sources of sponsorship were signed, they were not sufficient to cover the gap left by Gazprom, and the financial free-fall began.

The Board’s financial parachute was to draw against the 2020 IOC payout from Tokyo2020, prior to it being received. Of course, that would mean the world body would start the next quadrennium with some of the 2020-2024 period’s income already spent. The amount of that payment could only be estimated – which may have been more or less that the Rio 2016 payment.

To cover the expected UKP1.30m deficit World Sailing’s Board decided to obtain a bank overdraft facility secured against the World Sailing Investment Trusts of UKP2.7million. World Sailing cannot draw on this so-called “doomsday account” established around the turn of the 21st century, but it can borrow/secure a financial facility against the Trust funds.

Due to a consolidation of items in the management accounts, the actual cost of the move to London and ongoing costs are not clear, there is obviously an annual rental, but information was also given in Bermuda that the relocation to London cost UKP1.1m including Capex. There was a rent-free period to the value of UKP760,000 which was to be spread over the term of the lease in the presented accounts. A total of UKP1.7million was spent on “non-recurring investments in our future”.

One component of those costs are believed to be the UKP300,000 spent on a Governance Review and implementation.

The proposed new Constitution from that exercise was rejected in Bermuda as it failed to achieve the required 75% vote to pass – falling well short with only 66% of the membership being in favour. A re-jigged version of the Constitution was slated to be put before an Extraordinary General Meeting in May, however that meeting was called off after the world airlines began their shutdown following the CONVID-19 crisis, but not before over 40 member national authorities had called for the meeting to not be held and delayed, if necessary until later in the year, at the Annual Conference in Abu Dhabi. An event fee for that conference, was treated as revenue in advance in the management accounts presented in Bermuda.

A further UKP300,000 was spent on the first phase of a “digital re-platformisation”.

Yesterday, on SailingIllustrated.com starting at 16m30sec an interview was shown between highly respected Board Member Gary Jobson and Mikkel Thommessen of Danish sailing magazine Seil.

In that interview, Jobson revealed that he had put World Sailing’s Ethics Committee on notice that he would be lodging a complaint once the CONVID-19 situation had moderated. The complaint is believed to relate to a letter sent on March 2, 2020 complaining of comments broadcast two weeks earlier on February 18 – claiming that Scott Perry and Gary Jobson had disclosed confidential information to the show host, the very well connected Tom Ehman. The letter, above Jobson and Perry’s “signatures” required a retraction of the comments “and especially your claim that we are the source of your misinformation”.

The letter was sent on World Sailing letterhead and with the signatures of the two Vice Presidents copied and pasted on the document. It transpired that neither Jobson or Perry had given their permission for their signatures to be attached.

A day after the World Sailing letter, on March 3, Scott Perry sent an email of apology and explanation to Ehman, saying that the President of World Sailing had drafted the letter of March 2, and that neither Perry or Jobson had given their permission for the letter, with the allegedly forged signatures, to be sent.

Perry noted in his email that World Sailing had got the wrong “Scott” and that Ehman’s information and comments had in fact come from statements by Scott Macleod, a global sports marketing expert with a strong sailing experience across many high profile sailing events.

Last October, the controversial CEO of World Sailing, Andy Hunt, resigned abruptly after America’s Cup champions Emirates Team New Zealand issued a statement accusing Hunt of “attempting to circumvent the (Event Sanctioning Fee) process by contacting the NZ Government.” Hunt’s intervention was believed to be an attempt to force Defenders into making a settlement at a much higher figure than had been the practice at previous America’s Cup and other Special Events which have to pay a Sanctioning Fee to World Sailing.

Alva Yachts is building Imoca for the Vendée Globe 2024/2025."Mount Everest of the Seas" as a new challenge for the young and innovative yacht building...
Read more
Sailing

An impressive fleet of twenty-three ClubSwan yachts has gathered at the Marina di Scarlino to mark the debut of an explosive new...
Read more
- Advertisment -