Anna: The modern classic yacht that conceals some serious technology 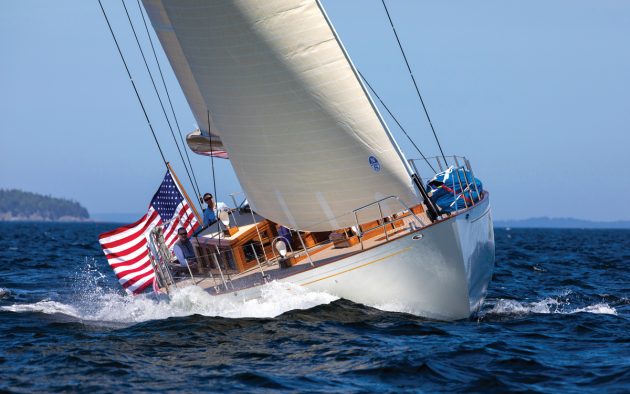 Anna is a custom 65ft Spirit of Tradition yacht with some very high-tech features concealed beneath her classic exterior, reports Alison Langley

When approaching Anna moored at the dock, it’s hard to immediately tell whether she is a restored classic or a recently built replica. In fact, neither is true; Anna is a new build designed to include both the virtues of a classic yacht and the technical achievements of a modern cruiser.

Anna’s story began two decades ago when owner Tony Merck began thinking about stepping up from small classic daysailers, like the Herreshoff 12 1⁄2 and the Bjarne Aas-designed International One-Design, into a larger cruiser that could maintain a classic aesthetic.

Merck had watched the birth of the Spirit of Tradition genre and had followed boats like the Pedrick-designed carbon beauty Savannah, as well as the Joel White-designed W-Class day racers. But his ambitions lay less with recreating an early 20th Century racer. Instead he admired the sturdy, able cruisers from past designers such as Fife and Alden, while he also loved the modern construction and high specification of this new generation of classics. 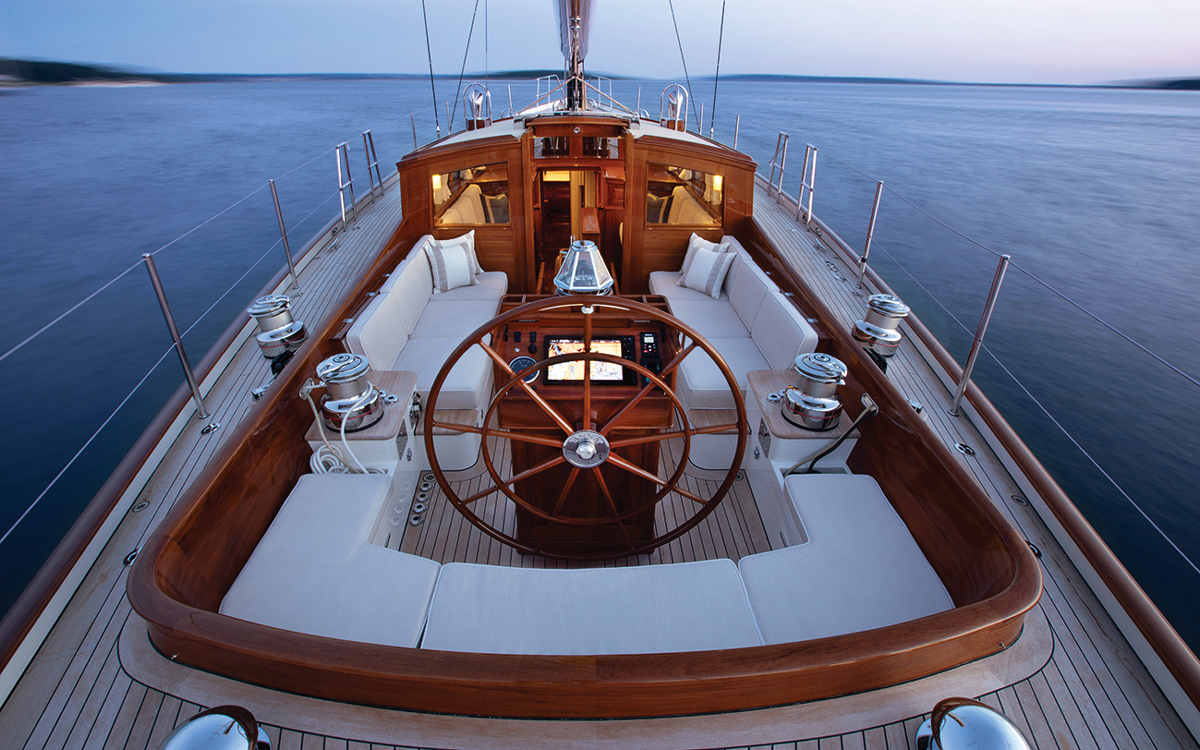 In the summer of 2015, Tony approached Robert Stephens of Stephens Waring Yacht Design and work began on proposal sketches for the boat that would become Anna at their design offices in Belfast, Maine. Stephens has had a lot of experience with modern wood construction, having worked in the Spirit of Tradition genre since before it even had a name.

Tony and his wife Ann knew they wanted her to be built in Maine, but were not set on a yard. Robert Stephens and business partner Paul Waring took Tony on a guided tour of five top Maine yards before deciding to go with Lyman Morse, of Thomaston. Coincidently, Tony had played soccer and rebuilt old cars with yard founder Cabot Lyman in prep school some 50 years before.

Lyman-Morse is well-respected in the custom boat world, but were not then as well known for building wooden boats as many other Maine yards with expertise in cold-moulded wood construction. Lyman-Morse did, however, have a reputation for high-quality glassfibre and carbon boats, but won the job thanks to their systems expertise and a modern approach to construction, including the integration of old-school hand craftsmanship with cutting-edge equipment like five-axis CNC machines.

I was hired by Ann Merck and Lyman-Morse early in the project to photograph the entire project from start to finish, and make a coffee table book about Anna as a surprise gift for Tony. Project manager Lance Buchanan made sure my visits were timed so I could capture the build at the right moments.

Her deck is built as a sandwich, separate from the hull: plywood laid over a temporary mould, covered with CoreCell foam, then another ply skin, with a laid teak weatherdeck. Once interior components were in place the deck/cockpit/deckhouse assembly was installed as a unit. 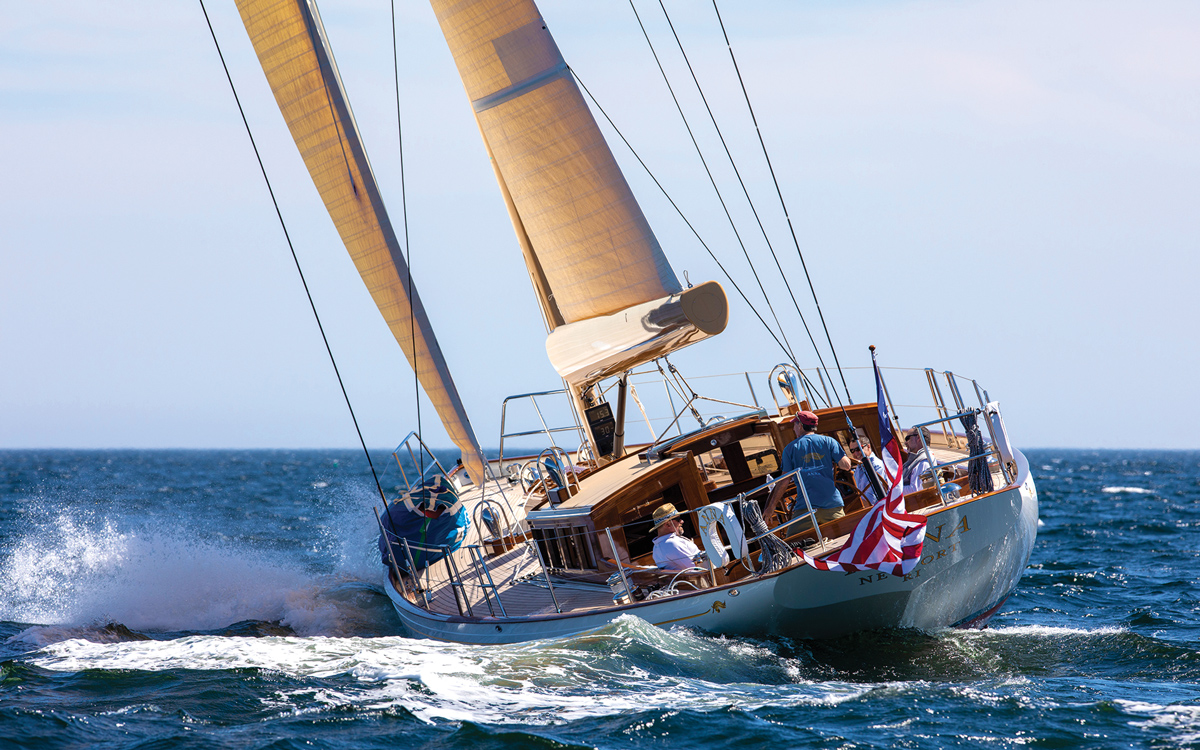 Lyman-Morse built Anna’s interior in modules, allowing them to fabricate the galley, head, and main saloon off the boat and then lift each completed section into the hull. When each module was installed, the bulkheads mated against the curvature of the hull perfectly, with no trimming or additional tweaking required. Anna’s construction adage became, literally, ‘measure once, cut once’.

Since Anna’s design brief called for a classic ambience, that meant that hundreds of feet of hydraulic lines, electrical wires, and even halyards needed to be concealed beneath the yacht’s joinery. The designers at Lyman-Morse and Stephens Waring worked closely to come up with innovative ways to hide these wiring runs and mechanical spaces. By creating a complete 3D model of Anna they were able to plan these tiny crevices before construction began.

Stephens Waring brought in interior designer Martha Coolidge to contribute her fine eye to the style and detail of the interior, which was painstakingly developed with a combination of hand-coloured sketches, computer renderings and tactile examples. “I think we went through 17 iterations of the brass light-switch covers!” recalls Stephens. 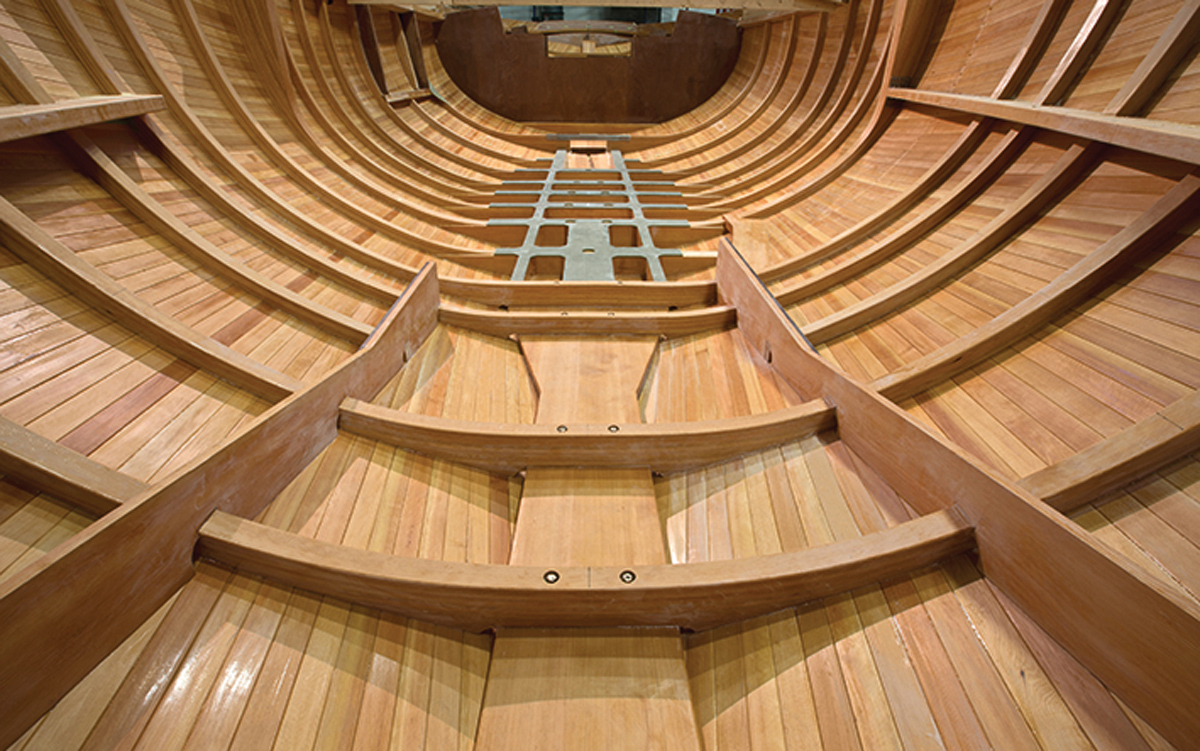 8,212ft of tongue and groove (Douglas fir) planks were used for the inner layer of the hull

Anna is intended for easy daysailing, and her deck layout reflects this. A roller-furling boom from Southern Spars makes simple work of the large, high aspect ratio mainsail. A self-tacking jib will be the go-to sail for most of her career. Anna’s captain, Jim Murphy, enjoys sailing with guests aboard. “I love to call ‘Ready about’ and watch the guests ask ‘What happens now?’ and see their faces when I say ‘Nothing’, and just spin the wheel,” he comments with a grin.

But ease of sailing has not dulled the experience. Murphy explains: “Under sail, Anna is like a wonderful dancer. Her motion, her response to the sea and helm are like no other boat that I have sailed. An absolute joy.” For Anna’s forays onto the racecourse, she switches to the ‘race jib’, a 100% working jib that fits on the furling headstay. A Code Zero and masthead asymmetric round out her inventory.

Anna’s traditional style masks lots of high-tech systems. Sail handling systems are all push-button: electric winches, roller-furling boom and jib, and hydraulics to drive the sail controls. Two hidden systems maintain her classic lines while adding 21st Century functionality: a below deck anchor deployment system, and a side-boarding platform that eases access from a tender and provides a swimming ‘porch’. 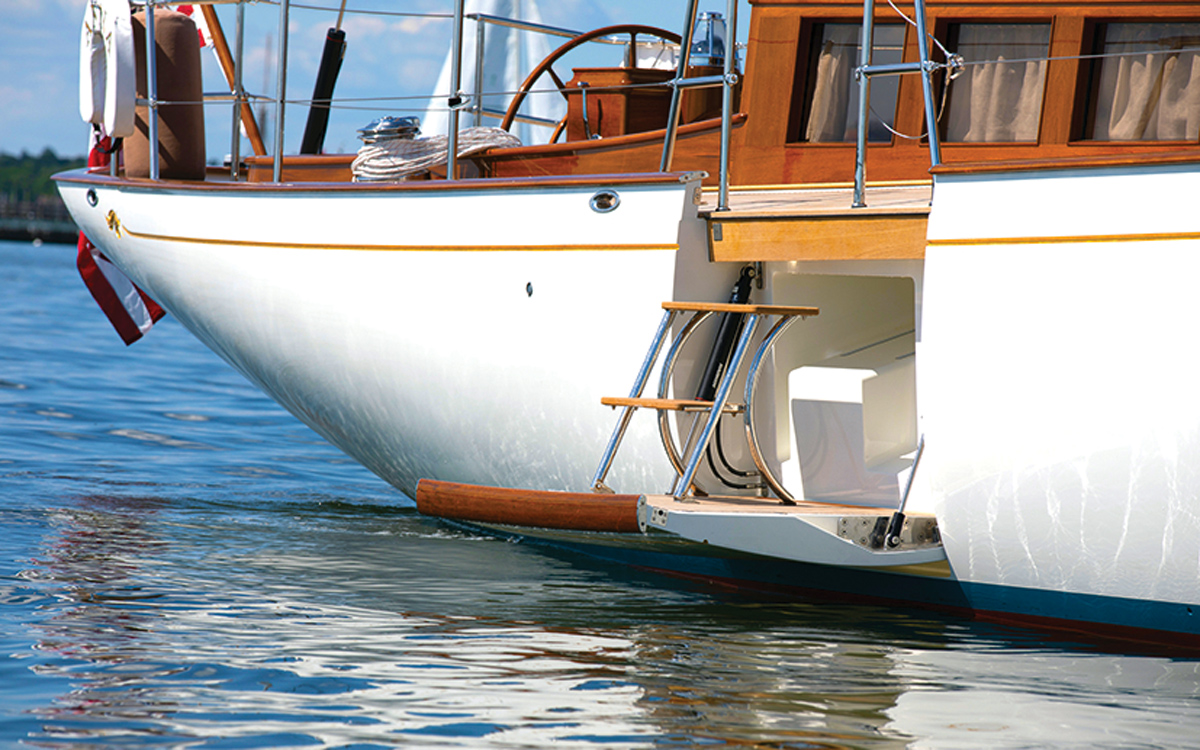 A hydraulic boarding platform enables easy access to the water for all generations. The step-stool ladder deploys automatically

Beneath the saloon is a state-of-the-art engine room with turbodiesel motor, lithium ion batteries and multi-compressor air conditioning. A touchscreen nav plotter in the raised saloon disappears into the furniture with a touch of a button. Her deck saloon windows are power-operated at rear and sides, allowing airflow and communication with people sitting in the cockpit at the push of a button.

Following her launch in April 2018, Anna has completed two sailing seasons, split between Rhode Island, Maine, and Nova Scotia, with a good mix of day sailing, Spirit of Tradition racing, and overnight sails. She’s earned silverware in both Sprit of Tradition races and design awards but, more importantly, she’s fulfilled the ambition her owners had 20 years earlier to expand their world of classic sailing.