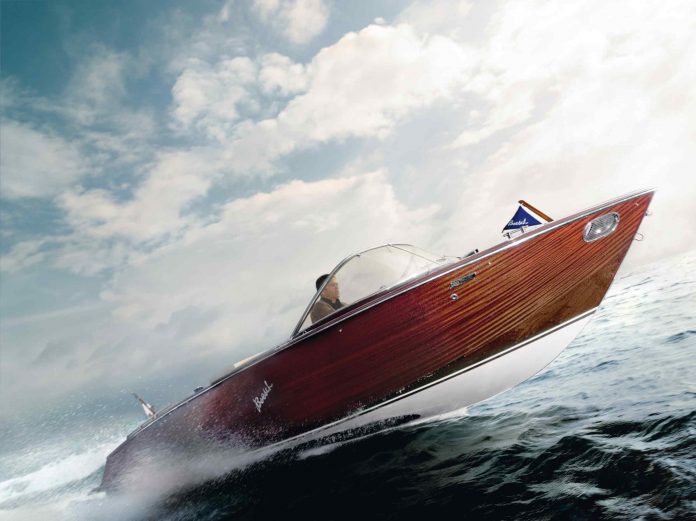 Nothing says classic Côte d’Azur cool quite like a hand-built wooden motorboat.

A few hours’ sleep were sufficient and then we were ready to begin all over again – and at the moorings, always a Riva ready to welcome us.” So said 1960s playboy and one-summer-lover of Brigitte Bardot, Gigi Rizzi, for whom a Riva with a hull of richly varnished mahogany was as much a gentleman’s essential as a beautiful blonde, a Ferrari coupé and a waterside home with a well-stocked wine cellar and private jetty.

Half-a-century later, the Riva name is still synonymous with the quintessential wooden motor launch – despite the fact that, by the 1970s, Carlo Riva had already switched to manufacturing hulls using glass fibre in what proved to be a failed attempt to revive the company’s then-ailing fortunes. Owned by the giant Ferretti group since 2000, Riva now successfully combines the best of modern materials with aesthetic touches from historic models to evoke the style of a classic wooden boat without the drawbacks of the real thing, which can be easily damaged, difficult to repair and demanding to maintain – and, above all, fiendishly tricky to build in the first place.

For true aficionados of those elegant craft of the past, however, only wood is capable of creating a launch with real soul. Perhaps unsurprisingly, the number of independent specialists who still make such boats in significant volumes has dwindled to single figures. In Europe, the two pre‑eminent manufacturers are both based on the shores of Lake Zurich: Boesch towards the northwest corner and Pedrazzini on the same side, further south. The former boasts a history dating back almost a century, when founder Jakob Boesch, a carpenter who moved down from the mountains to benefit from the more favourable weather and altitude near the lake, retrained as a boat-builder. Boesch borrowed money from the Lindt chocolate family to enable him to buy the Treichler shipyard, where he made simple wooden rowing and sailing boats and later racing yachts – areas in which his eponymous firm continued to specialise until moving into the growing market for motorised craft during the 1950s. By the 1960s, Boesch boats had become familiar sights at glamorous seaside and lakeside resorts around the world, and served as the official launches of the waterski world championships from 1960 to 1976.

Since the original Boesch rowing boat took to the water in 1920, the firm has recorded every project that has passed through its factory doors and, at time of writing, was on hull number 3,867. More than half have been motorised, with some of the latest, smaller models featuring eco-friendly electric power (although the larger ones still use the classic single or twin V8 petrol‑engine setup). “I think the types of boat we make are returning to popularity simply because people are showing a greater appreciation for traditional craftsmanship and the values that go with it,” says CEO Markus Boesch, the founder’s great-grandson.

“These boats are made using the method of building we have employed since the 1960s – a laminate construction of thin layers of mahogany that can be coated in epoxy – so they are resilient and require less maintenance. Clients also appreciate the fact that a boat with a wooden hull is far more sustainable and more environmentally friendly to create than one made from aluminium or GRP [glass‑reinforced plastic],” Boesch adds.

But while Boesch’s origins are Swiss, those of its downshore rival Pedrazzini are, like Riva’s, decidedly Italian. Just as Pietro Riva began as an impecunious patcher-upper of other people’s fishing boats on the shores of Lake Iseo during the 1840s, so Augusto Pedrazzini learnt his craft on his native Lake Como before heading to Zurich at the age of 22 with the aim of blending Italian style with Swiss precision.

He arrived in 1906 and spent eight years working as a hired hand in various boatyards before setting up on his own in 1914. For the next 40 years, he steadily developed a reputation as a maker of first-rate wooden sail and rowing boats, and after he died in 1955, his son Ferrucio took over. It was Ferrucio who set about steering Pedrazzini towards the manufacture of luxurious motorised launches, starting in 1955 with some small, outboard-engined racers and following a year later with designs for its first production motor boat, the Capri.

Now run by Ferrucio’s 56-year-old son Claudio, Pedrazzini continues to produce a 7.5m model under the same name (from about £255,000), along with the 8.5m Vivale (from about £436,000) and the 10.3m Special (from about £520,000). All use the identifying feature of every Pedrazzini boat built since the 1950s, which is a distinctive, sharp V-shaped hull that is designed to be both elegant at rest and under acceleration, as well as uncannily stable in rough conditions.

Equally remarkable is the sheer attention to detail that goes into every component. The hull alone, assembled from dozens of individual mahogany elements that are ordered 10 years in advance so they can be acclimatised in the factory’s loft, requires more than 2,000 hours of work to put together and results in a deck that’s 1.8cm thick and finished in no fewer than 20 coats of gleaming lacquer to protect it from the effects of sunlight, water and salt.

The fittings, too, are of exquisite quality – no flimsy aluminium frame for a Pedrazzini windscreen (moulded, incidentally, in the oven of a local bakery), but a solid brass one thickly plated with chrome to complement the bronze-cast, chromed vent cowls mounted above the engine bay and the swimming ladder that’s seamlessly integrated into the stern. And all made in-house.

Look longer and you’ll find further signs of the deeply considered craftsmanship: every visible screw head is pointing in precisely the same direction; even the cleats are made to a design specific to Pedrazzini; and the elegant “waterfall” stern is unique to the marque.

Smaller boats take around eight months to complete, the larger Special around a year – and although the hull design must remain uniform, clients can choose any type of interior finish and any extras they so desire. “We can build no more than eight boats per year, but the waiting time from placing an order to completion is usually less than 12 months,” says Claudio Pedrazzini. “There are about 15 craftspeople working here and each individual boat is usually made from start to finish by one team of three; some of the staff have worked at Pedrazzini for more than 40 years – and while we have plenty of interest from new customers, some clients have been coming to us since the 1960s, or even before.”

Once you’re out on the water on a jaw-droppingly gorgeous Special, the reason Pedrazzini enjoys such customer loyalty soon becomes clear. Not only are these boats beautiful to look at, they are also supremely rewarding to drive – the one I tried was equipped with the sort of slim and elegant Nardi steering wheel more usually found on a thoroughbred Italian sports car, while the array of chrome-rimmed cockpit instruments evoked the shamelessly glitzy dashboard of a 1950s Cadillac.

There was more than a hint of Americana beneath the stern-mounted engine cover, too, in the form of a pair of 5.7-litre, Chrysler petrol V8s. “Never electric!” says yard foreman Jurt Merens as he encourages me to open the throttles on the open water of the speed-limit-free lake. “Like with a Harley-Davidson, the sound is part of the character.”

As the mighty engines got into their stride with a deep, burbling growl, I began to understand exactly what he meant. I was completely overawed by the sheer elegance with which the boat rose effortlessly onto the plane and proceeded to virtually glide across the water while producing barely a hint of spray. “That’s the hull design,” explains Merens. “Although it has been slightly adjusted over the decades as marine engineering has evolved, it still uses essentially the same geometry that Pedrazzini first developed during the 1950s.”

By the time we had returned to the yard, where the firm operates a dry-dock facility that enables 34 owners to store their boats under cover out of season, I had come to understand why the fortunate few who get to own a Pedrazzini rarely switch allegiance. Property developer Peter Meienberg, for example, has been a Pedrazzini client for more than 35 years and is now on his fourth model. His present launch, a Special called Sea Breeze, has been in his ownership for three years and, living close to Lake Zurich, he used it on more than 30 occasions during the summer. “I honestly believe the Pedrazzini to be the most beautiful boat in the world,” he says. “Everything about the way they are constructed is truly special, and the more you live with one, the more you realise how personal you can make them. After this summer, for example, I am thinking about having Sea Breeze fitted with an espresso machine and changing the upholstery to be more like the style of a Bentley car. And you can do that. The factory will do anything to the boat that you wish.”

He concedes, however, that owning a boat with a gleaming mahogany hull does require greater care than one made from more resilient fibreglass. “You do have to be very careful, but I am a self-confessed pedant anyway. Which is why I love to spend time drying the deck by hand and polishing the chrome.

“I’m fortunate enough to have a lovely home in the mountains and a collection of Ferrari and BMW cars too – but of all the things I own,” says Meienberg earnestly, “that boat is definitely my number one.”