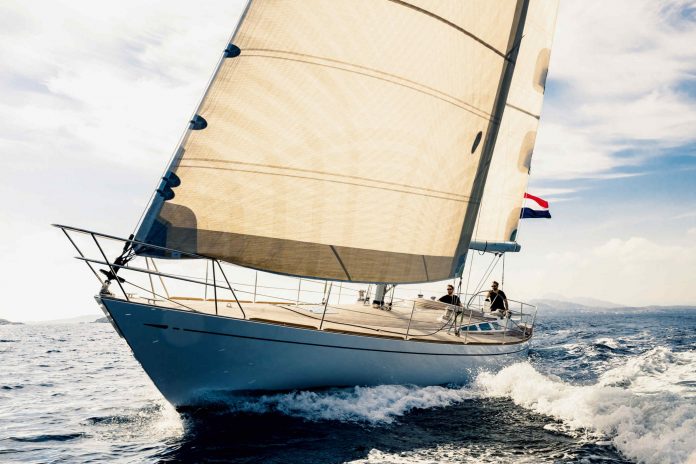 The saying goes that the past is a foreign country, but in certain specialist corners of the automotive industry it might be fairer to say that it bears an increasingly close resemblance to the present. Today you can cruise the King’s Road in a remastered Mini from David Brown, or tour the Highlands and Islands on a brand-new, retro-styled Royal Enfield 650 motorcycle from India, or rejoice in the wind in your hair aboard a Morgan Plus Six, which, in spite of its vintage looks, is 99 per cent new under the skin.

This desire to own gorgeous-looking things that merge the carefree spirit of the past with modern tech and reliability is the inspiration for the work of Egbert Wattel and Peter Melchers, the young founders of Younique Yachts in the Netherlands. While there are innumerable boatyards that specialise in reverent restorations of lustrously varnished Edwardian craft, Younique, under its Legends Reborn brand, focuses on more recent classics. It is also unafraid to make the kind of wholesale alterations that would give most classic-yacht buffs an attack of the vapours. The result, it claims, is a craft that still looks fabulous but has state-of-the-art performance and offers the sort of streamlined onboard experience expected by the modern owner.

“We have new materials and new techniques that were not available to the original owners of these yachts. If they had been, they would have done the same as us,” says Wattel. Younique works to commission, drawing up plans in close consultation with a boat’s owner. In terms of price, each project is, well, unique – but, says Melchers, as a rough yardstick, if you fell in love with a 50-footer and brought it in for the full Younique treatment, you’d be looking at anything from €750,000 to €1.3m for a sailboat, and slightly less – around €500,000 to €800,000 – for a motor yacht.

Two recent Legend Reborn restoration projects exemplify the yard’s highly personalised approach. One, Zephyr, is a family motorcruiser built just before the second world war – a time when yacht design was just beginning to break free from tradition and explore the clean and uncluttered stylistic possibilities of modernism. The other, Lucky Bird, is a fibreglass 48-footer from the early 1970s – a model that has always been regarded with awe by sailing connoisseurs.

Zephyr, an elegantly understated 49ft motor yacht launched in 1939, is about to emerge from the 18-month refit Younique has been carrying out for her Dutch owner. Any number of local boatyards would have been happy to fulfil his order with something sensible, roomy and well-built, but he had other ideas. “With a boat, I think the pleasure of ownership shouldn’t be confined just to life on board – walking towards it should give you a little thrill of anticipation,” he says. “When you walk away at the end of the day, it should make you turn around for a last look. It should be beautiful.”

His new boat is certainly that, but she’s practical too, with her brand-new open-plan interior – something that would be decried as an act of vandalism by traditional classic-yacht enthusiasts, even though it would be easy to argue that the Bauhaus aesthetic of its new, white open spaces chimes far more truthfully with the clean 1930s modernism of her exterior styling than the dark and compartmentalised original interior would have done. The rebuilt superstructure, by contrast, is a pretty faithful rendition. “We studied the original profile and old photographs and used them to design the new wheelhouse and the window shapes,” says Wattel. “It’s about retaining the correct character.”

Up to a point, of course. As we have seen, Younique is not afraid to make improvements. So, like the epoxy‑glass sheathing and other modern miracle treatments that will keep Zephyr’s wooden structures watertight and virtually maintenance-free, her exterior features beautifully accomplished stainless‑steel detailing and eye-catching mahogany mouldings that don’t seem to be in those old pictures. But again, this is the sort of thing, Wattel insists, that the craftsmen in the original yard would have done had the technologies been available to them.

As for Lucky Bird, sailing cognoscenti will see her qualities at a glance. Originally constructed at the noted Nautor yard in Finland, she is a production-built Swan from 1972. Widely considered to be one of the most iconic bluewater sailing designs of all time, according to Yachting World, the Swan 48 comes from the drawing board of Sparkman & Stephens, arguably the most prestigious of all yacht designers. She might be built of fibreglass rather than mahogany, but Lucky Bird was a classic from the day of her launch.

Since her appointment with Younique, she now boasts a modern carbon-fibre rig and a new sailplan, while other alterations on deck include a glass hatch over the main companionway – a feature that would simply not have been contemplated with early‑1970s boatbuilding technology. The decision to remove the aluminium toe rail that encircled the deck led to a long and messy job that involved cutting, grinding and filling the fibreglass laminate, but it has dramatically improved the yacht’s external elegance. A concealed anchor locker will be frowned upon by traditionalists, but many will feel that a clean and clear foredeck is ample justification.

Slatted sides emphasise the graceful interior curvature of the hull, but do no more than hint at the original interior design. Her bright, open galley is all‑electric, for Lucky Bird now has very un-1970s  technology in the engine room. New structural carbon fibre elements are on show. Visible fixings have been retained to evoke the no-nonsense Scandinavian aesthetic of the original fit‑out, although in some of the more obvious places the screws have been replaced by bolts of polished aluminium. Purists will undoubtedly object to the work Younique has done – according to Wattel, they already have – but with her legendary designer and looks to die for, Lucky Bird will always have the cachet of a true thoroughbred.

Meanwhile, Zephyr can claim some serious cachet of her own. The original naval architecture studio that designed her in the 1930s is still in business, and so is De Vries, the shipyard that built her. And, in an unlikely twist of fate, both companies later became members of the fabled Feadship consortium, which is today one of the most respected names in global superyachting. “Feadship is monitoring the rebuild,” confirms Melchers. “And if everything is to its standards, Zephyr will get the Feadship logo and a letter of approval.”

A classic yacht with a modern badge – in Zephyr the past may truly catch up with the present.