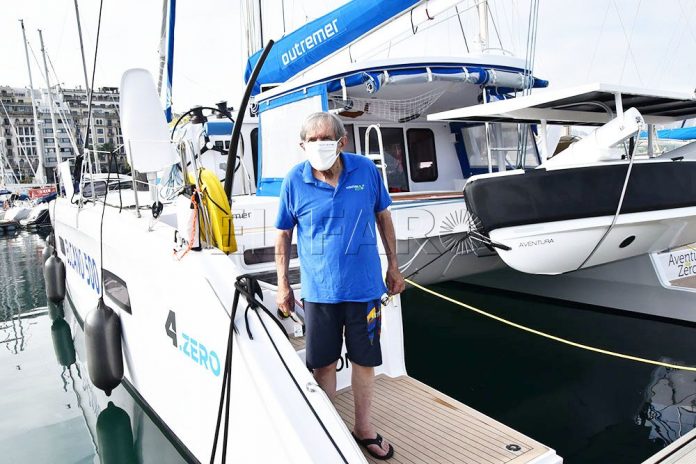 My decision to abandon the Elcano Challenge has taken by surprise many of those who have been following my voyage, and I want to apologies to all of you for the disappointment this may have caused.  After my recent brief announcement, I owe it to you to explain in detail the reasons for my decision.

In my long life I cannot remember ever abandoning a promising project, and it is very painful to accept failure now, but I am a fatalist and whenever I am faced with such a situation, I simply accept it and move on.

Sailing around the world on an electric boat with zero emissions along the route of the first circumnavigation, was such a tempting opportunity to do something meaningful and in tune with our concern for protecting the environment, that my family agreed that I should do it.  They are just as disappointed as I am for it and accept my reasons, so I hope you will do the same.

The essential feature of an electric boat concept is not its propulsion, but the ability to produce electricity while sailing. It’s no good having an electricity-driven boat if you cannot produce electricity to replace what has been used, which is the function and key element of the Oceanvolt regeneration system. While sailing, the propellers on the two saildrives are turning and producing electricity. I had been assured that we could expect an average charge of 600 Watts at 6 knots and 800 Watts at 8 knots. During the tests carried out at La Grande Motte, where the Outremer boatyard is based in the south of France, we achieved those figures, and I was persuaded.

Our 1000-mile maiden voyage from La Grande Motte to Seville showed up some of the weaknesses of the regeneration system when it failed to keep up with the overall consumption on a proper voyage, not during a test in calm waters. The consumption included both the autopilot and instruments, and also domestic demands such as induction cooker, microwave oven, two fridges, etc. My doubts started after we had sailed 82 miles in a period of 10 hours at an average speed of 8.2 knots. The net gain was a disappointing 9.5% of our total battery capacity, equivalent to 5.32 kWh, or 532 Watts per hour.

Fortunately we had with us Romain Guiraudou of the Outremer design office, who had supervised the refining and implementation of the Oceanvolt system. He suggested that we cut down our electricity consumption to the absolute minimum, which we did. Over the next few days our Spartan lifestyle did help us keep enough power in the battery banks to allow us to make it to Ceuta, where we arrived with the battery capacity down to 12% of its total. We recharged the batteries and continued to Seville.

I decided to blame that disappointing start on the capricious Mediterranean winds and weather, expecting to fare better on the subsequent 700-mile passage to the Canaries.  Having learned the lessons of the previous passage, we did our best to keep electricity consumption to the minimum. I kept a detailed record over this entire passage, and the results were consistently and disappointingly the same.  When we left Chipiona, at the mouth of the Guadalquivir, the state of the battery banks was 50%. When we arrived off Tenerife, before starting the motors to enter the marina, the batteries were down to 40%, but at one point the level had fallen to an alarming 13.5%.

What this passage has shown was that in spite of all our efforts to save energy, we were unable to regenerate sufficient electricity to cover consumption and top up the batteries. We realised that if we did not reduce the overall consumption, the batteries could be completely depleted. To avoid such a situation, on several days we did not use the electric winches, avoided using the power-hungry electric cooker, and instead cooked or heated up some of our meals in a solar cooker. We cut personal consumption to the absolute minimum, we did not boil water, had no hot drinks, turned off the two fridges, and either had cold food or whatever we managed to bake in our solar cooker.

This was a typical offshore passage, with both light and strong winds, and a good example of what we could encounter on some future passages where we might not be able to count on consistent favourable sailing conditions. My understanding was that even if the level of the two-battery banks fell to a critical level, once we got better sailing conditions, we should be able to recharge the batteries quickly. Unfortunately what became obvious on this passage was that the net charge produced by the two propellers was nowhere near the level needed to recharge the two banks in a reasonable time. On average we found that the two propellers could only produce an hourly net charge of 0.6% of the total battery capacity, equivalent to 336 Watts.

The only conclusion I could draw was that in its present form, the regeneration system, and implicitly the entire concept, was not working. Our efforts to save electricity helped, but made little difference in the end: even when sailing conditions were good and we were sailing fast, the regeneration could not keep pace. It was a heart-wrenching discovery as we realised that our voyage and the entire project of a self-sufficient electric vessel could end in failure. The system might work on a passage to the Caribbean in tradewind conditions, or even on a Mediterranean cruise where one could stop in a marina every night and charge the batteries, but not on a challenging route such as the one we were embarking on. It would certainly work in a hybrid version with an auxiliary diesel generator, but that would defeat the aim of this project of proving that it is possible to undertake long voyages on an electric sailing boat.

In fairness to Outremer I must point out that CEO Xavier Demarest, general manager Stephane Grimault and head of the design office Stephane Renard all advised me to have an auxiliary generator, even if only to be used in an emergency. But I refused, as it would have defeated the very concept of a zero emissions sailing boat. Only now, with the wisdom of hindsight, do I see that what they regarded as a possible emergency situation, sooner or later would have become the norm.

As we came into the marina in Tenerife, ready to take our lines was my friend Michael Holm, the owner of Anemis, the first hybrid Garcia Exploration 45. Having bought this boat on my inspiration, I was there at her launch in Cherbourg in June last year, and have been following Michael and his family travels ever since.

An electrical engineer by profession, he was the best person to comment on my predicament. His verdict was unequivocal: “Jimmy, your concept may be right but it is premature. There is no way an electric sailing vessel of any size could regenerate sufficient electricity to keep the battery bank, however large, in balance and cover all consumption at the same time. This is why I decided on a hybrid solution. And by the way, after 18 months and an Atlantic crossing, my own regeneration system, based on an electric motor with shaft drive and folding propeller, is still not working to my satisfaction. In fact, it doesn’t work at all.”

Michael’s comments made me realise that I had arrived at a critical point. If we decided to continue our voyage along the proposed route, stopping occasionally to fully charge the batteries seemed unavoidable. Once we had passed the Cape Verde Islands, the nearest place to make such a stop would be over 1500 miles away, with the equator and doldrums to cross on the way.

The prospect of being forced to stop in Brazil, where the Covid situation is totally out of control, was another risk I was not prepared to take. I had already decided to spend the winter in the Canaries when I saw the latest forecast and the possibility of three days of southerly winds. It was a temptation impossible to resist. We left immediately and are now close to having sailed half the distance to Gibraltar. As we left Tenerife, Michael was on the dock to cast off our lines. His last words were, “Jimmy, sail straight to Outremer and have them install you a decent genset!”

And that’s where we are going.