Home Regatta America's Cup Prada Cup 2021: it will be a great Saturday for Auckland
RegattaAmerica's Cup 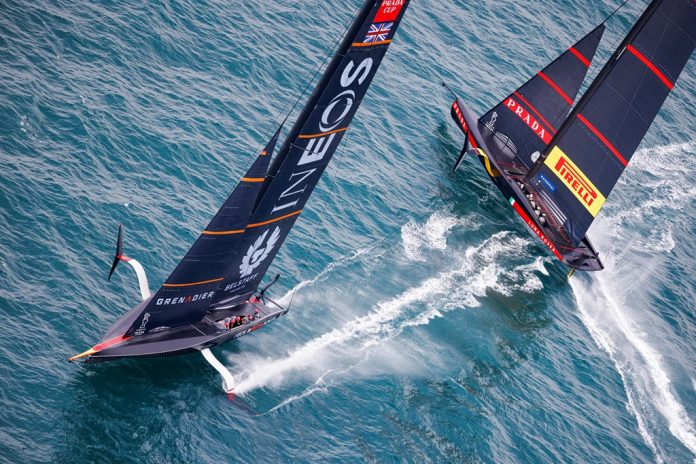 The spotlight is on tomorrow’s regatta between Luna Rossa Prada Pirelli Team and Ineos Team UK as it will be a first match point between the two challengers. In the event of an English victory, Sir Ben Ainslie books his spot in the final of the  Prada Cup. In case the Italians win on Saturday, Ineos Team UK and Luna Rossa Prada Pirelli will need to face each other again on Sunday. The winner will be awarded with the Christmas Race trophy, which wasn’t won in December as races were cancelled due to lack of wind, in recognition of being the top qualifier of the Prada Cup round robins.

It will be hard to predict the outcome of this weekend, BRITANNIA will take to the water with four consecutive victories and they look like they are the boat to beat but Max Sirena and his crew have worked hard over the week to fine-tune Luna Rossa and now she is ready.

Quotes from the press conference

On Tuning the boats
Jimmy Spithill – Helmsman – Luna Rossa Prada Pirelli – On new foils
“Maybe we have changed one of the foils… I haven’t looked this morning, but you never know, it could have happened! Like the other teams we are constantly trying to improve the boat and make her faster. We went sailing the other morning, and we will be training again today, but we don’t want to blow up the grinders because tomorrow will be a pretty important race”.

Giles Scott – Tactician Ineos Team UK – On improvements and grinders
“Like every other team we constantly are trying to evolve the boat and this week has not been any different. Like the Italians, today we will go for a little sail out there in order to check the conditions and to get ready for tomorrow. On BRITANNIA we have 6 grinders while Luna Rossa has 8 grinders. There is lot of freedom in the rule, and as a team we were able to divvy up the rules as we see fit. In our case we sacrificed a few grinders to be stronger in other areas, we are very pleased with the trade-off we made, we feel we are racing well and hopefully it will continue”.

Sir Ben Ainslie – Team Principal and Skipper – Ineos Team UK on Grinders
“Having a reduced number of grinders is an efficiency deal. As Giles said these are decisions we made a year ago or more as they involve the layout of the boat and the systems we use. Our grinders actually had a lot of input with our engineers on trying to find the right solution; it’s working out, they are doing a good job”.

ON MINDSET FOR WEEK-END RACES
Jimmy Spithill – Helmsman – Luna Rossa Prada Pirelli
“There is not desperation; we don’t get desperate at Luna Rossa. It’s more excitement to be honest. It’s just a great opportunity because there is a real incentive here for both these teams to win tomorrow’s race; if we do that there is a lot of incentive for Sunday as well. The stakes are high and it’s a great test for our two teams”.

Francesco Bruni – Helmsman Luna Rossa Prada Pirelli
“We had fantastic and intense races with BRITANNIA, they were all very close. We were never far behind struggling to catch up, so we are confident about our speed.”

Sir Ben Ainslie – Team Principal and Skipper – Ineos Team UK
“We take each race one at a time. To come out on top [this week-end] buys you time and time in this game is everything. Some upgrades might be an over-night job, others might take three or four days. Winning the Round Robin will buy the team the flexibility to change things you wouldn’t have the chance to change otherwise. It’s going to be significant in the overall outcome if this Cup”.

Regatta Director Iain Murray also announced that in the event of a yacht capsizing during a race, the Umpires will terminate the race immediately and the point will be assigned to the opponent, rather than having to wait until the yacht receives outside help.