Gitana: best time ever recorded to the tip of South Africa 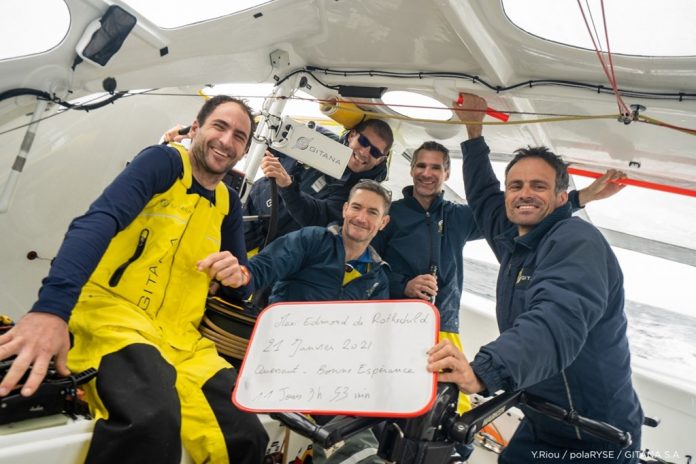 By leaving the longitude of Cape Agulhas in her wake this Thursday 21 January at 15h37’53’’ UTC, the Maxi Edmond de Rothschild has officially entered the Indian Ocean. After 11 days 14 hours and 3 minutes at sea, Franck Cammas, Charles Caudrelier and their four crew are attacking the Southern Ocean with a lead of more than 1 day 7 hours and 19 minutes over Francis Joyon and the men on Idec Sport. In so doing, they have become the fastest sailors in history on this descent of the Atlantic; a fantastic time which they naturally dedicate to Baron Benjamin de Rothschild, whose passing was announced just a few days ago.

This twelfth day at sea has enabled the Maxi Edmond de Rothschild to secure her first accolades in her Jules Verne Trophy record attempt. After setting sail from Ushant on 10 January at 01h33’46’’ UTC, the six sailors passed the longitude of the Cape of Good Hope this Thursday morning at 11h27’46’’ UTC after 11 days 9 hours and 53 minutes at sea. In so doing, they improved on the reference time set by the crew on Banque Populaire in 2012 in the Jules Verne Trophy by 11 hours and 55 minutes. It’s also worth noting that until this 21 January, the outright record for this section of the course was held by a solo sailor with a time of 11 days 20 hours and 10 minutes. The latter was François Gabart who, in 2017, posted a staggering performance to the tip of South Africa.
Some four hours later, at 15h37’53’’ UTC, Franck Cammas, Charles Caudrelier, David Boileau, Erwan Israël, Yann Riou and Morgan Lagravière repeated this performance at Cape Agulhas, arriving in the Indian Ocean with the best reference time and, most importantly, a lead of 1 day 7 hours and 19 minutes over the current Jules Verne Trophy holder.

“Less than 11 days 10 hours to get to Good Hope is great going, which means that it was a favourable weather window and we were right to snap it up! That said, we still feel like we lost some time along the way, especially in the doldrums, but we’re happy to be here and to be posting these speeds. Now comes the hard part,” admits Franck Cammas to Yann Riou’s camera.

In at the deep end in the Southern Ocean

The Maxi Edmond de Rothschild is navigating the first miles of her career in the Southern Ocean, as is the case for David Boileau and Morgan Lagravière, who are tackling their first passage across the Indian Ocean. However, the crew is all too aware, this is where things start to get serious! The first reason for this is that over this long section of the course in the Southern Ocean, Francis Joyon and his crew were brilliant and clearly broke new ground in relation to the Trophy thanks to a trajectory bordering on perfection; namely 5 days 21 hours to devour the Indian Ocean and then 7 days 21 hours till they made Cape Horn… The second reason is that the men of Gitana Team are plunging down towards latitudes which are never a trivial matter.

“It’s a fine first reference time since it’s the outright record over this course between Ushant and the tip of South Africa. Even though it’s a record that doesn’t really count for a lot, it’s important for us because it has enabled us to complete this passage with a lead of nearly 1 and a half days over the Jules Verne Trophy record held by Francis Joyon and that’s the objective we set ourselves. After that, Francis enjoyed a completely crazy Southern Ocean and we have very little chance of finding such conditions. Moreover, we won’t have such a quick Indian Ocean, so we’re delighted to have this cushion which, to my mind, is barely enough to stay ahead of him or level with him by the time we exit. As a result, our primary objective has been quite successful! On top of that, the boat is in tip-top condition and that’s the main thing!” concluded Charles Caudrelier.

By way of a tribute to Benjamin de Rothschild, our dear departed owner

Since last Friday, Gitana Team, the offshore racing stable he founded with his wife Ariane de Rothschild in 2000, has been mourning the loss of its owner. In our own way, from the sea he was so fond of, we wanted to pay him one last tribute. These new reference times, the best of all time over this section of the course, we dedicate to him and offer them to Ariane de Rothschild and her four daughters in his honour.

“The wake of the Maxi Edmond de Rothschild will punctuate the history of flying boats and offshore racing. We could never thank Benjamin de Rothschild enough for having enabled us to embark on this incredible adventure and for having believed in this project and in our team to make it a reality. He managed to transform his heritage with boldness and passion. Every day we remember how lucky we are to be a part of this story and to have a chance to add new pages to this quite unique lineage”, stated Cyril Dardashti, director of Gitana.