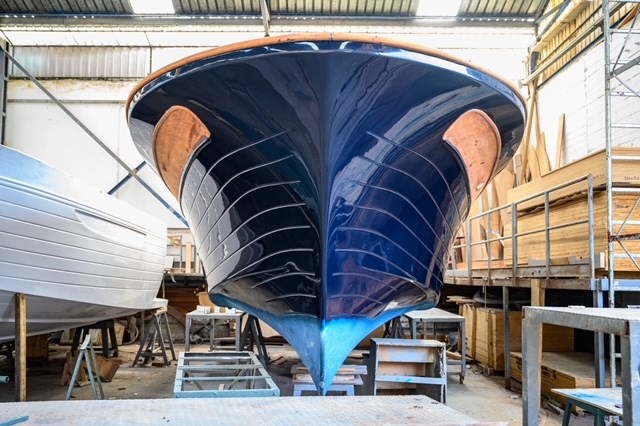 The recent years’ growth trend of the Neapolitan shipyard was confirmed once again in this past 2020, so much that Gozzi Mimì decided to expand its production site adding a new 1.000 square meters shed, that will be dedicated to the models’ display, and  new offices. This is the beginning of an unprecedented chapter in the brand’s history, one that will also include the expansion into new foreign markets.

In the beginning of 2021 Gozzi Mimì unveiled a new 1.000 square meters space in Naples in response to the recent months’ growing demand, coming mostly from foreign markets and for larger yachts. The space is intended for the display of boats and a new office building. This expansion confirms the will of development of a shipyard that, since its foundation  50 years ago, has always been able to create a perfect balance between technological innovation and respect for the traditions.

As confirmed by Gozzi Mimì’s CEO Domenico Senese: “This growth is a natural progression of the path undertaken so far, initiated in 1975 by my father Salvatore in a limited space of 500 square meters. In the following years we kept growing and collecting more and more approvals: thanks to this positive trend in 2020 we have increased our turnover by 30% and by the first weeks of 2021 we already received a considerable amount  of requests. The focus is now shifting towards larger models – the best selling boat at the moment is the Libeccio 9.5 Walkaround – and we have received many requests from foreign customers. We are therefore planning our expansion strategy towards foreign markets”.

Gozzi Mimì is a family-run company that crossed the national borders without ever changing ownership, the founder is often seen seen working in the shipyard alongside his two sons. Nowadays the brand is well known throughout Europe and in several Asian Countries for his planing gozzi, meeting point between past and future: the design recalls the fascinating tradition of the shipwights from Sorrento (the recent Libeccio 8.5 Classic offers even the tiller steering) but hides a hyper-modern and technological heart, that allows a navigation at surprising speeds and very low consumption.

Innovation plays a vital role in the shipyards’ production line: the models are designed and engineered in 3D and realized using seven-axis NC milling machines and the hulls are made through vacuum infusion, a process that, besides offering many advantages regarding safety and emission, it allows to create a performing composite, with a reduced weight, a correct resin / fiber ratio and a constant thickness. This technique is always updated and improved, thanks to the results of continuous research in which Valerio Rivellini, designer of all the latest models of the shipyard, and the Federico II University of Naples also participate.

The German based manufacturer of electric yachts and floating solutions has signed contracts with environmentally conscious yachting dealers from across the world....
Read more

The shipyard Advanced Aerodynamic Vessels (A2V) based in La Rochelle - France has just delivered Monaco One to the Société Monégasque Internationale...
Read more

Following the Race start from Lorient, France, at the end of May, the inaugural edition of The Ocean Race Europe will stop...
Read more

The period between the Prada Cup Final and the start of the 36th America’s Cup Match Presented by Prada was always going...
Read more

For almost a year, the organising committee of the Semaine Olympique Française has designed and developed many measures to welcome the elite...
Read more

Revolutions aren’t announcements, but action. Continuing its history of groundbreaking innovations that have amazed and inspired the world of yachting as a...
Read more
Load more