Vendée Globe: thursday is finish day for Gang of Four 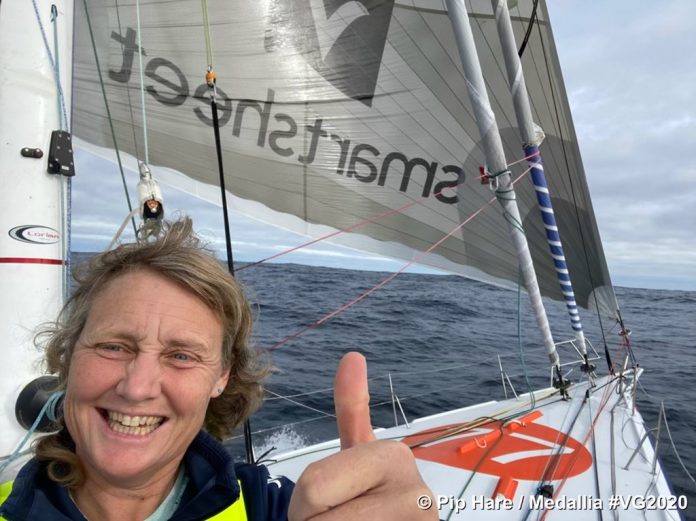 After the heat of the tropics and the relentless winds, all pervading dampness and chill of the Southern Oceans the next group of Vendée Globe finishers into Les Sables d’Olonne will have sub zero overnight temperatures to add to their experiences of the weather extremes as winter returns to the west coast of France.

Approaching his fourth consecutive Vendée Globe finish Boissières said this morning “The night has been quite tough”  telling of his difficulties surfing in more than 40 knots of wind while slaloming between cargo ships off Cape Finisterre.

This gang of four will likely finish upwind in bitterly cold easterly offshore breezes which will be very unstable requiring them to be quite conservative in their sailplan. The famous Les Sables d’Olonne channel is not accessible between 0700hrs and 1400hrs and so it is likely that Boissières and Kojiro Shiraishi will return up the channel together.

Shiraishi will become the first Asian skipper to finish the Vendée Globe and in so doing realise his 30 year dream of honouring the legacy of his mentor Yukoh Tada who took his own life during the 1991 Around Alone race.

Alan Roura and Stéphane Le Diraison are expected afternoon Thursday. Roura has the upper hand still while the skipper of Time for Oceans has lost his J3 headsail which tore itself apart yesterday.

Pip Hare is now expected in the small hours of Friday morning, A failed halyard lock strop dropped her Fractional Code Zero to the deck and into the water, damaging the pulpit of Medallia. But the British skipper remains in excellent spirits contemplating the conclusion of the Vendée Globe which has been her dream since being inspired as a teenager by the exploits of Florence Arthaud.

Deprived of her downwind sails Hare was looking at options to get moving fast again:

“There is a huge swell running, knocking the wind out of Medallia’s sails but we are struggling to move with no offwind sails. In the light of day I have surveyed the damage and spoken with Joff about what options I have for getting one of my code zeros back up in the sky. Goodness knows I could do with it now. Without it I am waddling along to the finish and that is not how this story ends.

I am gutted to have to pull out of my fight with the foilers. Last night charging along in the South I knew I would be giving them some grief at the next position schedule, maybe not enough to overtake but certainly to keep them on their toes. Now I will finish alone and probably around 12 hours later. It depends how long I get stuck in this wind hole and whether I can rig up a sail that will get me out of it a bit quicker. One thing is for sure, this is not over and I still have the clock to race against.”