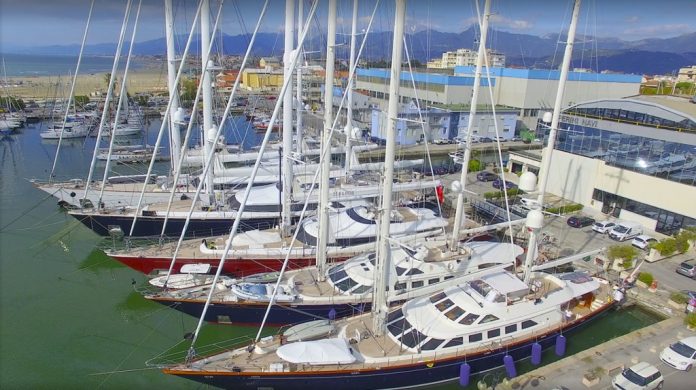 The news of the moment, that of the joint venture between the Ferretti Group and Sanlorenzo which, through the creation of a Newco, will try to jointly take over and therefore save Perini Navi, is likely to become one of the most important not only of this period but even of the year. Indeed, to be honest, we could define it as epochal news, not only because the prestigious Viareggio shipyard is involved, declared bankrupt on January 29th.

In addition to the value of the stakes, the control of the most important world brand in the construction of pleasure sailing vessels over 50 meters in length, an icon of Made in Italy and international boating, Gruppo Ferretti and Sanlorenzo Spa with the announced Perini Navi’s rescue attempt set a milestone in the history of our home yacht industry: two Italian shipyards agree to achieve a common goal.

Although we have lived on boating for over 30 years, we don’t remember ever reading news of this kind. Also because they are not just any two shipyards but two of the main players in the luxury yachting market, which enliven the ranking of those who perform the most in that golden sphere. After Azimut / Benetti, over the top, it is they who have been competing for the other steps of the podium for years now, adding together approximately 1.2 billion euros in turnover. Easy to have always considered them as competitors, antagonists or if you prefer competitors; It is difficult to predict that, on the other hand, they could one day find such a cohesive joint venture, united by such an important objective. We think that no one expected such an agreement, first of all because we are in Italy, the land of the wildest parochialism, of the Guelphs and Ghibellines, of individualism raised to the nth degree, where everyone thinks of himself and if he really has to think of another, especially when it comes to business, just imagine how to do it tripping. It is useless to hide it, it is in our Italic nature.

Then because in the specific nautical field, the Italian shipyards have always tended to be against, rather than together, until they felt the need to create two antithetical nautical associations, that of UCINA Confindustria Nautica and of the splinters of Nautica Italiana, where, moreover, the Sanlorenzo and Ferretti themselves, in their respective sides, were fierce opponents. And then the two holding companies of the shipbuilding industry also experienced a certain competition in the race to enter the Milan Stock Exchange where each acted for themselves, for the sake of their finances – Ferretti withdrew its IPO while Sanlorenzo took it to term – but still trying to get there before the other. It is very recent history, but suddenly, with the “Valentine’s pact” which came to light yesterday morning,

“In the segment of steel boats between 50 and 70 meters – Paolo Vitelli told us some time ago – the Italian shipbuilding industry should pool, because it is starting to make good boats, qualitatively competitive, and instead the ruthless competition between the various brands , individualism, the desire of individual entrepreneurs to appear better than others, prevents them from doing what they did in Holland with Feadship. “

For the uninitiated, Feadship – acronym of First Export Association of Dutch Shipbuilders – one of the reference brands of the Northern European shipbuilding industry that produces super, mega and giga yachts, was born in 1949 as a cooperative enterprise in which two shipyards participate, Royal Van Lent Shipyard (now owned by Lvmh, Bernard Arnault) and Koninklijke De Vries Scheepsbouw, but which at the time also included De Voogt Naval Architects, Van de Stadt, Witsen & Vis, De Vries Lentsch and Akerboom. Their association was born for specific purposes: to raise their companies from the rubble of World War II, proposing the new brand where the market had not been cleared by the conflict, as in Europe, but, indeed, in full development or in the States United.

In a certain sense, albeit with the necessary distinctions, the operation brought to light yesterday with the statements by Avv. Galassi and Cav. Perotti, at the helm of the Ferretti Group and Sanlorenzo SpA respectively, has the same goal: to lift a construction site from the rubble, even if only those of a failure, and restore it to the dignity it deserves, conquering the international market.

Will they succeed in their intent or take control of Perini Navi? It is premature to understand it now, but undoubtedly their pact, at the moment the only striking certainty, seems to have greatly raised the bar for the other subjects vying for the acquisition of the brand founded by Fabio Perini: The Italian Sea Group, by Giovanni Costantino, and Palumbo Superyacht, of the Palumbo family.

Nothing has yet been decided, also because we have learned from Viareggio trade union sources, evidently well informed on the matter, of the possibility of an appeal by the former Perini Navi property, the Tabacchi family, against the bankruptcy sentence issued by the court of Lucca. Appeal which, if accepted by the Florence Court of Appeal, could further complicate any type of solution and in fact suspend, delay or prevent the sale of the company against those subjects who have already expressed their interest in the acquisition to date.

All this without considering that Perini Navi, due to its value as a luxury yachting brand and as the owner of important production facilities, is a shipyard that could appeal to various other subjects, including foreign ones.

What we hope is that in the end Perini Navi will be taken over by a serious and financially solid person, who understands the brand and thinks about its future, who in addition to investing in the company also puts his heart into creating a long-term strategy term, favoring a real relaunch rather than a mere speculation in the name of hit and run.

Delivered in December 2020, the Custom RP-Nauta 100 Morgana completed her maiden voyage from Cape Town to the Mediterranean Sea 30 days after her...
Read more
Sailing Yachts

Grafito Aims to Be the Next Ultimate Luxury Sailing Yacht, Boasts Graphene Hull

Ladies and gentlemen, what you see in the cover photo and gallery is known as the Grafito. It’s a sailing yacht design by...
Read more
Sailing Yachts

Nautor’s Swan and its strategic partner in the construction of the ClubSwan 80, Persico Marine, open the doors of the facility where...
Read more
Sailing Yachts

He may be one of the most prolific yacht designers of his times, but London-based Philippe Briand is not resting on his...
Read more
Sailing Yachts

It was anything but a dull Monday morning in Makkum. While most of the villagers were still sleeping, at 06:00 AM the...
Read more
- Advertisment -

What we’re witnessing is known as the Sunbeam ConceptONE, created by two designers, Maximilian Troicher and Anja Didrichsons. To make...
Read more

After being forced to abandon her race on 5th December following a violent collision with a floating object south of Cape Town...
Read more

With the prospect of being unable to run the early season events to an appropriate standard and have them properly accessible to...
Read more
Load more