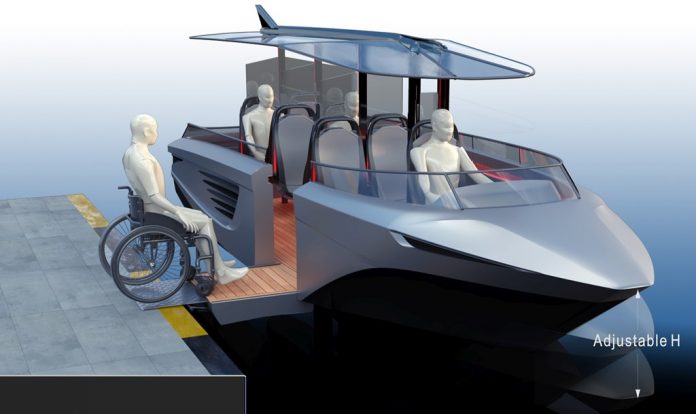 It, equipped with a submerged body, wings able to make it “take off” and a system of mobile hulls, has characteristics that distinguish it in the current panorama of hulls for boats.

Obviously, it was immediately conceived in a full-electric configuration and with hydrogen variants, favorably utilizing its storage in the submerged body.

In particular this hull:

It has a limited wave formation, even and especially at low speeds, and not only in flight like ‘foil’ hulls

Thanks to the latter, it has superior roll stabilization at anchor, or at boarding

They allow you to adjust the height of the platform: it is possible to bring the deck of the boat to the level of almost any pier

These last two points are essential for the “taxi” application, conferring uniqueness characteristics to the project which in fact has the possibility of agile transport of people with disabilities or severe motor difficulties.

It can also be conceived as a version intended for hydro ambulance, with easy, lateral embarkation of a stretcher, as well as other highly accessible applications.

Born for nautical applications in general, thanks in particular to its accessibility, the taxi-boat based on this platform can therefore boast not only a reduced environmental impact but also and above all a high social value.

Any highly innovative technology has limitations. While being able to reduce its draft, thanks to the mobility of the side hulls, the boat, due to the height “above the water”, could not have accessibility to all the channels above the waterline, due to the bridges.

However, the possibility of reducing the draft when stationary makes it more competitive than other latest generation foiling solutions.

This technology, albeit with some limitations, could nevertheless be used to equip public transport in areas with a lake character, such as the Venetian lagoon or the city of Amsterdam, with some special vehicles.

The project is the subject of two patent filings for invention, and its development is currently in the social scope of an innovative startup specifically set up in February, currently financed by the inventors Massimo Verme and Roberto Rossi.

X Shore, a Swedish brand driving the future of electric, connected and sustainable boating, is making its debut in the United...
Read more
Boating