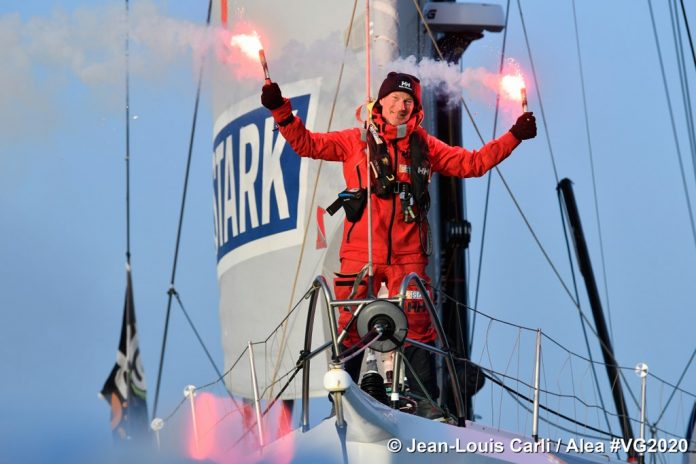 When Finnish solo skipper Ari Huusela crossed the finish line of the 2020-2021 Vendée Globe this Friday morning at 08 35 46 hrs UTC in Spring morning sunshine, light winds and mirror smooth seas to finish in 25th place on the solo non stop race around the world, it marked the ultimate conclusion of an ocean racing dream which has occupied almost all of his spare time over the last 22 years.
The elapsed time for Huusela is 116 days 18 hours 15 minutes and 46 seconds and he closes the finish line 36 days after winner Yannick Bestaven and Charlie Dalin crossed.

Huusela’s low risk ‘one chance only’ race round the planet has been executed with all the prudent weather routing precision and safeguards that might be expected of a long haul airline pilot who, while competing in his own ocean racing pinnacle event at the age of 58 always wanted to give himself the absolute best chance of finishing the course.

An airline maintenance engineer turned career pilot who has been a keen amateur ocean racer since 1999 when he first raced the Atlantic in a tiny Mini650, Huusela becomes the first skipper from a Nordic nation to start and complete the Vendée Globe.

He may be the last finisher to break the finish line, 25th from a record entry of 33 skippers, but it is doubtful there is a sailor on this race who has taken more pleasure nearly each and every day of his race.

Emotional arrival
A skipper who has built a huge, respectful following for his safety first approach and his regular, relaxed communication, as the last finisher into the Les Sables d’Olonne channel an emotional Huusela was given a huge welcome back.

“I was crying most of last night, I have been thinking about this for so long. I am so thankful to my team. Without them I would not be here, and to Alex Thomson who was the first one who pushed me and helped me a lot to start the project. And this welcome here today is so touching. To have been to all the starts of this race since 1996 and now to finally have finished today seeing all these people on the sea, in the Channel and now on the land is just amazing, to be able to enjoy it myself. I am so happy Les Sables d’Olonne and the Vendée region arrange this race, and so to see these nice people from Les Sables d’Olonne taking care of us and being out here this morning is just lovely.”

And while he quickly built his reputation as the race’s ‘super happy sailor’ he had tough times too, particularly beating back up the Atlantic ocean in big, confused seas.

“The hardest bit was when the boat was slamming when the sea state was so terrible and confused, the boat was slamming, slamming at the time. I thought the boat would break into pieces. And it was so uncomfortable to be in the boat at that time, that lasted two or three days and I called Niina (his partner and project manager) and I said had reached a point where I hoped the boat would break in two pieces and I could be rescued by a cargo ship, saving me.”

Few setbacks
Both technically and mentally he suffered his biggest setbacks very early on in the race, in the first couple of weeks. But having overcome these minor issues himself, since then Huusela’s two primary modes have been either ‘Happy’ or ‘Super Happy’.

As he closes a Vendée Globe which sees the highest ever number of finishes – 25, seven more than 2016-17’s previous best when 11 of the 29 skippers who started abandoned, Huusela can also reflect that he was in the race almost all of the way round.

Only in the last two weeks of the course did he finally lose contact with his nearest rival when Alexia Barrier escaped out of the zone of high pressure south of the Azores to move several hundred miles ahead of the Finnish skipper, who suffered three frustrating days crawling at sub 5kts speeds and making only around 50 miles a day.

Speaking a few days before his arrival, Huusela confirmed again that his only main goal was always just to finish. Were he to be in last position that was not going to be a concern for him.

“I am not worried at all. I am just super happy to be in the race and to be where I am. When I started the race I would have been happy to do it in 110 days but to me, it doesn’t matter if it is 150 days; that’s fine as long as I do finish. I knew I would be far away from the others. The most important thing is to finish with a solid boat in a  good condition.”

Completing the Vendée Globe is the high point of an ocean racing career which really started in the Mini Class at the back end of the 1990s. He completed the 1999 MiniTransat on a Finnish boat designed by Kamu Strahlmann which was previously sailed on the 1997 race.

He placed 13th of 16 finishers, one place behind French skipper Yannick Bestaven. In the intervening years he purchased the Andrew Cape designed former Aberdeen Asset Management which was sailed to 11th in the 2001 race by Sam Davies.

For reasons that he still does not fully comprehend he was not allowed to start the 2003 MiniTransat race – because the organisers said he had not accumulated enough miles on his ‘new boat’. Undaunted he sold the boat on to Isabelle Joschke and helped her start in the class before locating his previous Mini which was in a state of disrepair in a field in Ireland. So he completely refitted the boat and raced the 2007 Mini-Transat on it, finishing 37th.

Seven years later, after a spell sailing F18 catamarans he returned offshore to progress his Vendée Globe dream and took on the solo Route du Rhum on a Pogo 40 in the Rhum class, sailing a steady race to ninth position.

But the Vendée Globe was always his goal and in April 2018 he purchased the Owen Clarke design which had started life as Dee Caffari’s AVIVA for the 2008-9 race and which she also raced on the 2010-11 Barcelona World Race with Anna Corbella.

In the time available to him away from flying Airbus 350s for his job, he prepared his campaign doing the 2018 Route du Rhum to Guadeloupe on which he finished 2018 and the 2019 Transat Jacques Vabre with Mikey Ferguson finishing 26th.  His goals were always modest as were his budgets, simply building enough miles and experience towards his Vendée Globe challenge.

In the summer before the start he secured the sponsorship of STARK, one of Finland’s biggest building materials groups. While he was racing their programme won three national sponsorship awards in his native country, where Huusela has become a national hero with a huge following.

When he left the dock for his Vendée Globe on November 8th it was an emotional moment. It was the fifth time he had been to Les Sables d’Olonne for a start and this time he was crossing the line.

In fact he settled into his routine early, even if he felt slightly more nervous than on his ‘normal’ Transatlantic races that he had become used to. His confidence was knocked when he was flattened in the first big frontal system. Followed by an electrical problem – his batteries overcharging from the hydrogenator causing a complete system blackout – Huusela became concerned that his race might be plagued by daily problems.

“At first it was like the Route du Rhum or the MiniTransat or the Transat Jacques Vabre. But I had a bad time in the Doldrums with lots of thunderstorms and rain like I have never seen before, I thought I was going to drown in the rain. And then after that it was annoying to be upwind for the first while I did not like that.” He recalled recently, “Afterwards it was so nice sailing all the way to under South Africa, I really got into it then and enjoyed sailing under my A3, my biggest Code sail. At one point under South Africa we had three boats within a mile, Clement Giraud, Séb Destremau and I, and I took pictures and it was really cool. It was sunny, with beautiful days of easy miles. It was not really like the big south.”

Comfort Zone
He set himself strict wind limits downwind for his routing – 30kts maximum downwind – to minimise the stress on himself and the boat, which he has a significant finance loan on and which he therefore needed to sell in good condition on his return.

“I am sticking to my comfort zone, a slower, longer route but I am always so happy to be here. I feel safe and felt the boat was safe, this is the way I can stay in the race.”

At Cape Leeuwin he stayed north out of a nasty low pressure system which his nearest rival and running mate Alexia Barrier sailed through.

“I just did not want to be in those areas. I enjoyed the stable conditions and easy miles and I was sure I could keep the boat in one piece. The main thing has been finishing the race for me. I don’t think I will ever have the chance to make a big project like this again and so I have to make it to the finish.”  He said a few days ago.

His toughest days were the wipeout a few days after the start and when he was obliged to route through a 40-50kts storm to get to Cape Horn.

“The boat was knocked flat and the mast was in the water, I have never experienced that before, so that night was really, really bad, just a few days into the race.” he recalls.

“The heavy downwind coming to Cape Horn was so bad with the waves, I had two wipeouts with the waves, but they were not so bad as the mast did not hit the water, but it was scary.”

In fact at Cape Horn, rather than being very isolated and alone he rounded in close company with Alexia Barrier and Sam Davies – who was completing her Vendée Globe out of the race – and he enjoyed and profited from contact with them, and many other skippers, on the climb up the Atlantic.

“But the worst bits recently have been slamming in the horrible waves in the Atlantic, that has been really bad for me and the boat.” Huusela said just before the Azores.

The final days of his race, spring sunshine and flat seas have been a just reward for Ari Huusela who has become a huge national hero at home in Finland, just as he has become a treasured memory on this Vendée Globe for his seemingly endless good humoured Christmas advent messages and his daily video reports from the super happy sailor on ‘STARK IMOCA Vendée Globe 2020’…..