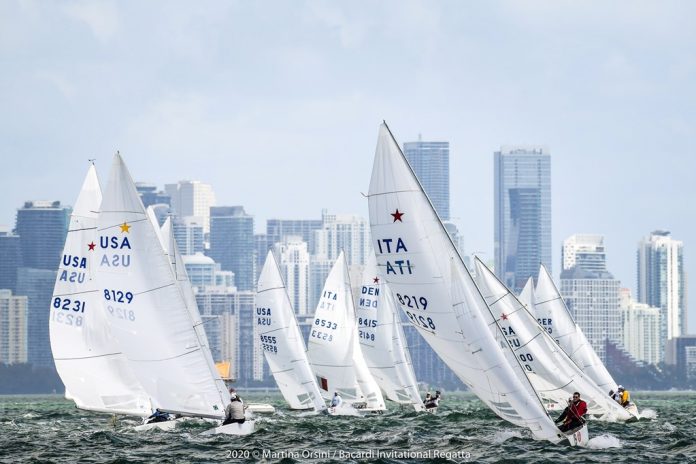 Every year the Bacardi Cup and Bacardi Invitational Regatta attract a dazzling mix of professional rock star racers and super-talented Corinthian teams from around the globe. They are drawn to the stunning location, world class racing and fantastic hospitality, which guarantee an atmosphere perfectly epitomizing the spirit of sailing. For 2021, the Covid-19 pandemic has forced a scaled down regatta, with local restrictions on entry levels and fleet quotas limiting racing to the Star Class, J/70 and Melges 24. The Viper 640 and VX One fleets have kindly stepped back and will re-join the racing in 2022.

First held in 1927 in Cuba, the iconic Bacardi Cup is steeped in history and has grown year on year in partnership with BACARDÍ® rum, who has been the proud patron and organizer since the regatta’s inception. Ranking as one of the world’s oldest and most esteemed sailing regattas, the Bacardi Cup has been a constant over the past nine decades, serving up sailing in the revered Star Class that has put teams and spectators on the edge of their seats with awe-inspiring race track action. Despite the event’s relaxed atmosphere and nostalgia, staking your place on the Bacardi Cup leader board remains as competitive as ever and the challenge for victory is as tough as the first edition back in 1927.

Eddie Cutillas of Bacardi USA, commented, “Although it hasn’t been easy to pull off this year’s event, Bacardi is immensely proud to host the 94th Bacardi Cup and 2021 Bacardi Invitational Regatta and I applaud everyone for working so closely together to follow the Covid-19 protocols and deliver a safe event for all. We expect to return to our usual hospitality and entertainment next year, so save the date as 2022 is going to be one heck of a party!”

Current travel restrictions and limits on fleet size have kept many at home, so we have a new look entry line up featuring only a few international faces who have been able to travel to join the mainly USA based teams. The commitment of sailors in making the journey to Miami demonstrates the huge popularity of the regatta and the Organizing Committee is very grateful for everyone’s participation.

“After a difficult past 12 months we are thrilled to welcome teams back to the 2021 Bacardi Cup Invitational Regatta,” commented Sara Zanobini, Event Director. “The Organizing Committee thanks all the teams who have been able to enter this year and we appreciate your commitment to sail despite the challenges. The event has a new format for 2021 as we have adapted to Covid-19, introducing multiple protocols and safety measures in our aim to keep everyone safe, which means there will be none of the usual shore-side social events, although sailors still get to enjoy BACARDÍ® rum with daily cocktail kits to take home. We are very proud to be amongst the few major sailing events to take place this year and we are proof events can be held safely. We expect teams’ energy and focus will all be on the racing and we are super excited to see how the leader board shapes up.”

As always plenty have their eyes on the main prizes and returning to defend their 2020 titles are Mateusz Kusznierewicz (POL) and Bruno Prada (BRA) in the Star Class and Bora Gulari (USA) and his team in the Melges 24 Class.

Kusznierewicz/Prada made winning the 93rd Bacardi Cup look easy, seizing victory with a race to spare, after which Kusznierewicz declared it ‘his perfect regatta’. They were chased hard by Augie Diaz, who for this year’s mission to displace the defenders has partnered up with Pedro Truche, who finished 5th last year with Paul Cayard. Local hero Diaz is massively experienced in sniffing out the breeze and Biscayne Bay current, but has yet to see his name etched in history on the iconic Bacardi Cup.

Strong contenders Eric Doyle/Payson Infelise won the warm-up at the Star Mid-winters last month ahead of Diaz, and won the 92nd Bacardi Cup in 2019 over Kusznierewicz. But touché, as Kusznierewicz/ Prada won the 2019 Star Worlds, with Diaz in 2nd, whilst Diaz won gold at the 2016 Worlds. And so it goes on in the highly talented Star fleet. Honoring its history, the Bacardi Cup remains firmly loyal to the initial concept of an event for all, with the sport’s luminaries, Olympic medalists, World Champions and America’s Cup legends on the same starting line as talented enthusiasts and weekend warriors. There is everything to play for with numerous well-known faces amongst the thirty teams taking on one traditional long race per day in the high octane battle for supremacy at the 94th Bacardi Cup and earn the honor of drinking BACARDÍ® rum from the winners’ trophy.

In the J/70 fleet, multiple teams hold impressive pedigrees in this well-honed pack who know each other well. Reigning J/70 World Champion Joel Ronning on ‘Catapult’ has to be a front runner with back to back wins in 2019 and 2018, although he dropped to 4th  last year. In 2020 and 2019, Ryan McKillen and his team on ‘Surge’ had to settle for second place and will want the top step! Their target is firmly in sight, with a win at the recent Bacardi Winter Series 2, with new crew on board in the form of Olympian Lucas Calabrese, who may be the component to secure an upgrade. Always sitting high up the leader board is Brian Keane, although he posted an errant 22nd last year, but previously placed 7th and 3rd and well as securing top five finishes at the J/70 Worlds. Pamela Rose and her team on Rosebud have been steadily advancing up the leader board, rounding out Bacardi Winter Series 2 in 3rd place, and clearly have the skill to stake their claim on the podium.

Amongst the favorites aiming to displace Gulari in the Melges 24 Class are both the 2nd and 3rd placed teams from 2020, with ‘Raza Mixta’ driven by Peter Duncan and ‘Shaka’ helmed by KC Shannon. Gulari launches his defence fresh from a win at the Bacardi Winter Series 2, where another strong contender Laura Grondin and her team on Dark Energy were one point back in second place, with Duncan in third. Grondin is one of four women skippers in the fleet, from a provisional entry list of twenty-four boats, each of whom will pounce on every opportunity to be out front. Bruce Ayres and his team on ‘Monsoon’ have featured on the podium at the past three Melges 24 Worlds, and will be right up in the hunt too.

“Whilst the event this year will be a bit different, the stunning Biscayne Bay is sure to deliver its usual brilliance and close racing,” added Regatta Chairman Mark Pincus. “I know everyone is ready for some exciting sailing and are hotly anticipating their return to the race track. We are really pleased to welcome teams to our annual celebration of sailing and friendship.

During the Bacardi Cup there will be a special tribute to honor the life and legacy of James ‘Ding’ Schoonmaker who passed away on 19 January 2021. We owe it to the special friendship between Ding, Tito Argamasilla Bacardi and Frank Zagarino who in 1962 brought the Bacardi Cup to Miami from Cuba, thus saving our unique and special regatta.

The Star Class challenge for the 94th Bacardi Cup kicks off on Monday 8 March, with a 6-race series of one traditional endurance race per day through until Saturday 13 March. Racing for the J/70 and Melges 24 gets underway from 11-13 March with 3 races scheduled per day for a total of 9 races. Race activities are managed by Coral Reef Yacht Club, in collaboration with Biscayne Bay Yacht Club, US Sailing Center and Shake-a-Leg Miami.