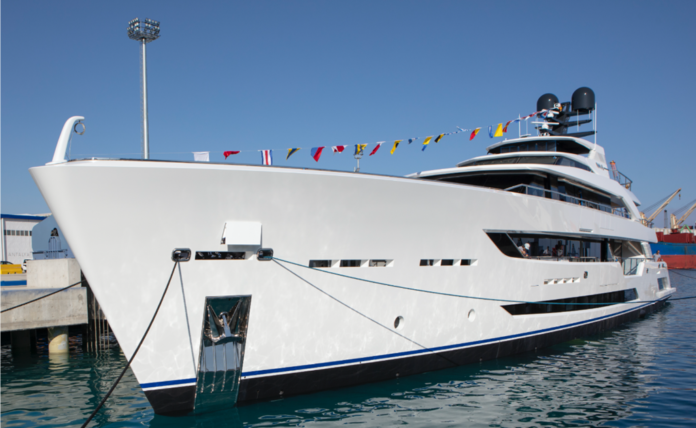 The new 55-metre Al Waab II is the first superyacht to be launched from the new 2,000-tonne capacity ship lift, part of a wider investment by the Antalya Free Zone into its yacht building infrastructure that includes bigger cranes and travel lifts as well as new hangars for superyacht construction and refit projects.

“We’re very proud of Al Waab II. We believe it is the longest steel and aluminium yacht below 500GT in the world, setting a new standard in external & internal volumes offered to a client in this   category.” says Alia President, Gökhan Çelik. “Yachts are getting longer and wider, but owners still want to stay below the 500GT mark. We’ve seen increasing interest in this kind of yacht and so to be one of the first with such an impressive project is an important milestone for Alia.”

Notwithstanding the many challenges faced by Alia and other shipyards during the Covid-19 pandemic, the launch took place only a few weeks behind the original build schedule.

“The last two years have been difficult, but we took a lot of health and safety measures, and to offset delays experienced by our European suppliers we worked around the problem and found ways to recreate lost time,” continues Çelik. “The fact we’ve done it in just over two years despite everything is a credit to the determination of the men and women who work here.”

Al Waab II remains below the 500GT threshold by emphasising the hull form and exterior areas, including a sprawling beach club. With design and engineering by Vripack and Dubai-based SF Yachts serving as the owner’s representative during the build, the yacht can sleep up to 12 guests in six staterooms and includes a lavish split-level master suite on the upper deck.

“The owner wanted a customized yacht that feels modern, fresh and most importantly like a home, and by that he means comfort, space, luxury, privacy and stability at sea,” says Francesco Pitea, CEO of SF Yachts. “The amount of outdoor space and the simplicity of the layout makes a big difference to the owner’s enjoyment of his yacht. It’s a dream moment after two years of hard work. We at SF Yachts couldn’t be more proud of Al Waab II and the amazing collaborations with Vripak and Alia.”

“For many owners, the concept of enjoying a ‘home at sea’ is what drives their passion for yachting,” says Bart Bouwhuis, Co-creative Director at Vripack. “The owner of Al Waab II had the explicit desire to use his boat as a family apartment. That desire became the founding principle of the entire design. The result is the very essence of living on the water.”

Once outfitting is complete, Al Waab II will undergo sea trials before delivery to her owner. The official World debut will take place late September 2021.

Following hard on the heels of the announcement that Ekka Yachts facilitated the sale of the  10th unit in Sanlorenzo’s 500EXP series,...
Read more
Motor Yachts

Benetti and Loro Piana interiors: 2 style icons for the Motopanfilo

Benetti and Loro Piana Interiors have formed an important collaboration in which the Maison has fitted out both the interiors and part...
Read more
- Advertisment -