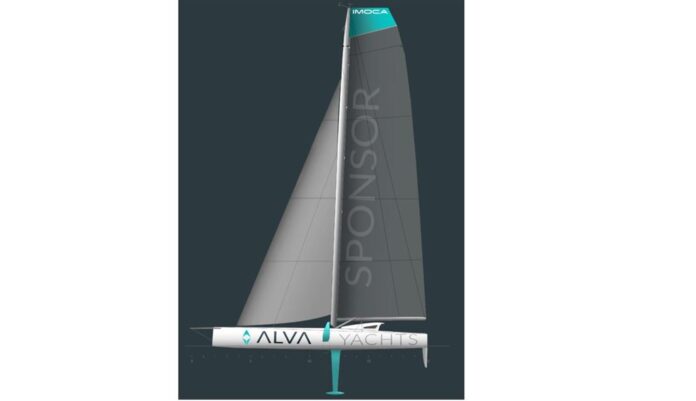 Alva Yachts is building Imoca for the Vendée Globe 2024/2025.”Mount Everest of the Seas” as a new challenge for the young and innovative yacht building company from Germany.

Alva Yachts, the German Luxury Electric Yacht brand, takes up the challenge of the Vendée Globe, also known as the “Mount Everest of the Seas”, and invests in the construction of an Imoca racing boat for its newly established team “ALVA blue”.With this new racing yacht, German skipper Joerg Riechers, one of the world’s best single-handed sailors, will be at the start of the upcoming Vendée Globe 2024/2025 and many preparatory races, such as the Transat Jaques Vabre and the Route du Rhum.

According to Holger Henn (founder and CEO Alva Yachts), this step once again underlines the company’s exceptional position and pioneering spirit in innovative boatbuilding. Henn says: “Alva Yachts is to offer the best boats for forward thinking explorers of the oceans.”His skipper Riechers comments: “There is no better test ground for marine products than the remote and rough spaces of the Southern Arctic Ocean. Solutions which work down there, will work everywhere. Alva Yachts customers will highly benefit from the knowledge gained in this region full of challenges.”The great strain on materials and especially on electronic components, such as sensors and controls, plays a major role for the developers at ALVA YACHTS in equipping the Vendée Globe Boots. Henn says, “The special focus will be on optimizing our electronics and telematics equipment, which we will then also use in the autonomous electric yachts of the OCEAN ECO series.

“The design process for the “ALVA blue Imoca” has already started. In addition to FarrDesign from Annapolis/USA, one of the world’s most renowned racing yacht design office, the two French designers Guillaume Dupont and Etienne Bertrand are also on board. Riechers deliberately chose this set-up as a mix of innovation and tradition.FarrDesign has proven its exceptional position over the years and was almost the only non-French company to break into the Imoca market, which is strongly dominated by French Designers. The actual boat building is done by TRIMARINE, Fernando Sena’s company. This shipyard stands for many pioneering achievements in boatbuilding with composite materials. Among others, seven America’s Cup boats, the Volvo 70, IOR Maxis, TP 52 and some IRC Raceboats were built there. Alva Yachts will present its commitment and the investment for the construction of the IMOCA60 for the upcoming Vendée Globe 2024/25 to the public during this year’s Cannes Yachting Festival. This opens up the opportunity for potential sponsors to be involved as a partner in this outstanding sporting event, which generates around €332 million in media value worldwide.

A new dealership for Southern Europe

Alva Yachts, German manufacturer of 100% electric boats and catamarans, and builder of floating villas, has just announced an addition in their dealer network. The newly founded Alva Yachts Med /AY_MED) is a spin off from AMO Yachts and ABS Yachts Sales S.L. in Ibiza. Beside their headquarters in Marina Botafoch, the main port of Ibiza, they will open a large office in Porto Portals in Mallorca beginning next year.

Founded in 1995, AMO yachts is a prestigious yacht broker specialized in motor yachts. The sales team operates the national and international markets.

The main office in the heart of Marina Botafoch offers exceptional access to the port moorings, facilities and services.

As well as yacht sales the company offers a wide variety of services related to Ship management: yacht registration, leasing and charter, maintenance crew, events organization and many more. AY_MED have purchased two Alva Yachts which will be available for sea trials and charter from 2022.

The company has also announced the finalization of a sale for the largest model currently in the range, the Ocean Eco 90 Explorer. The EX version is an upgrade of the Ocean Eco 90, with enclosed flybridge, carbon & stainless steel reinforcement for the hull structure and many other modifications. The main salon doesn’t feature a helm station, while the huge enclosed upper bridge can be a large salon/ skylounge or an owner’s cabin with a 360° view. OE 90 EX also features an additional hot water heater and tropical air conditioning.

The customer of hull #1 is an experienced UK businessman who will use the yacht with his family for long term cruising. The yacht comes with an owner’s cabin on the upper deck, 2x 350 kW hybrid-electric propulsion system, and an electric tender which will be charged via solar panels. Delivery of the first Ocean Eco 90 Explorer is due in the first quarter of 2023.

Syroco's "Moonshot I" combines technology in an innovative way that extends beyond speed and into lowering the world's carbon footprint.
Read more
Sailing

The IMA works closely with many yacht clubs and race organizers around the world who run racing for maxi yachts. In the...
Read more
Sailing

Following on from their multi-event Mediterranean Inshore and Offshore Challenges, the International Maxi Association (IMA) is to hold its first series in...
Read more
Sailing

The GLY World Odyssey 500 fleet arrived in Seville earlier this week in preparation for the start of this round the world rally on...
Read more
Sailing

British sailor Jimmy Cornell received an award for outstanding services related to National Defence on Friday by the Spanish Armada in the...
Read more
- Advertisment -