HomeBoatingTecnoRib will be at the Cannes Yachting Festival from 7 to 12...
Boating 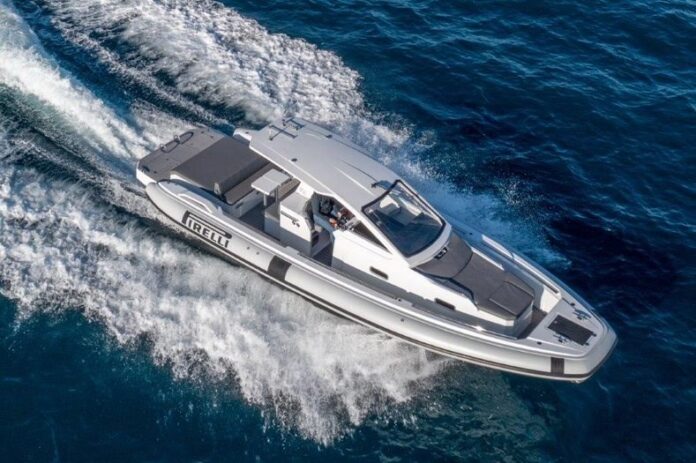 TecnoRib, the official licensee of Pirelli brand inflatable boats, returns to the Cannes Yachting Festival to launch the Pirelli 35 for the first time to an international audience, alongside which the Pirelli 42 will be on full display. The French boat show will be an opportunity to present visitors from all over the world the scale model of the Pirelli 50, the new and eagerly awaited RIB that completes the new speedboat line designed in collaboration with the Mannerfelt Design Team.

The Cannes Yachting Festival, set to take place from 7 to 12 September, will serve as the backdrop for the world debut in the water of the Pirelli 35, after its preview at the Venice Boat Show. Pirelli 35 is a walkaround with a double step hull designed in both outboard and sterndrive versions and it features aerodynamic and gritty lines that allow the boat to turn easily and safely also at full rudder and full speed.

At its side in the water will be the Pirelli 42, the first model of the updated walkaroud line that boasts a surprising stability, voluminous spaces below deck and a 4.10 metres beam. Its design, as well as that of the Pirelli 35, is signed by Mannerfelt Design Team, the famous Swedish studio with many years of experience in the creation of racing boats.

The Cannes Yachting Festival will welcome approximately 600 boats this year and will set the scene for the unveiling of the scale model of the brand new Pirelli 50, which will make its official debut in 2022, and anticipates the conclusion of the modernisation process of TecnoRib’ Speedboats line, as strongly desired by the shipyard. Gianni De Bonis, Managing Director of TecnoRib, said, “The Pirelli 50 is the culmination of a path that has seen the creation of three models in three years in the 10-15 metre segment, the heart of our target market. This has given impetus to growth above the sector average, and has allowed us to increase our share of exports. We have brought the concept of walkaround and maxirib together, keeping the focus on quality, performance and design, to maximize the livability of the spaces below deck.”

PIRELLI 50 shares the design and key features of the Pirelli 42 and 35, and offers a modern style with great attention to refined on-board accessories. Designed as a versatile boat, it can be employed for daily use, as a chase boat or as an ideal vessel for medium-range cruises.

Facebook
Twitter
Pinterest
WhatsApp
Previous articleAlva Yachts is building Imoca for the Vendée Globe 2024, 2025
Next articleMaxi Yacht Rolex Cup gets underway with a fleet of 44 yachts