The Italian Museum dedicated to the most famous speedboat – RIVA 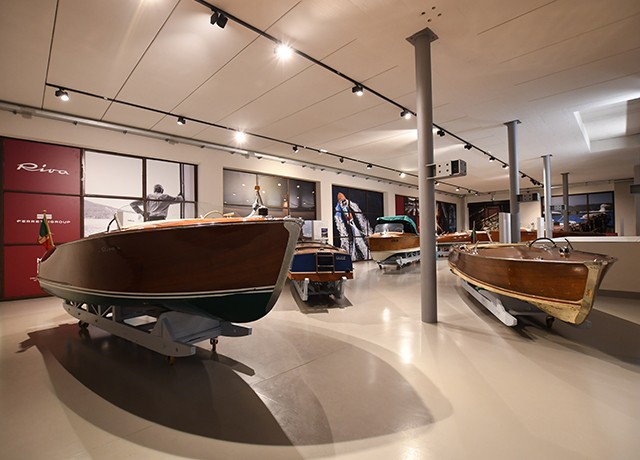 Seven vintage mahogany Rivas are on display at a museum near Lake Como, one of the largest owner communities of the highly coveted brand.

Riva Yachts has created an exhibition hall for seven of its mahogany runabouts at the MBL Lake Como International Museum of Vintage Boats in Pianello del Lario, Italy. Lake Como has one of the largest owner collections of vintage Rivas in the world, followed by Lake Garda and Lake Iseo in Sarnico, home of Riva’s production facility where the mahogany boats were built until 1995. Riva’s fiberglass line is now produced in the same facility as well as in La Spezia, Italy, by the Ferretti Group.

The 3,220-sq. foot exhibition room, designed by architect Paolo Albano and Riva’s in-house designers, uses an historical approach, proceeding from the 1930s through the brand’s “La Dolce Vita” heyday in the 1960s and ‘70s, when Riva Aquaramas, Aristons and Floridas were considered the most prestigious runabouts in the world.

They became status symbols in Monaco’s Port Hercules harbor as well as the French Riviera in Cannes and St. Tropez, as well as tony Italian and Swiss lakes. Royalty like Prince Rainier of Monaco and King Hussein of Jordan owned Rivas, while film stars like Sophia Loren, Brigitte Bardot, Peter Sellers, Sean Connery and Rex Harrison could also be seen driving sleek, gleaming Rivas around the Med. More recent stars like George Clooney have been photographed driving an Aquarama. 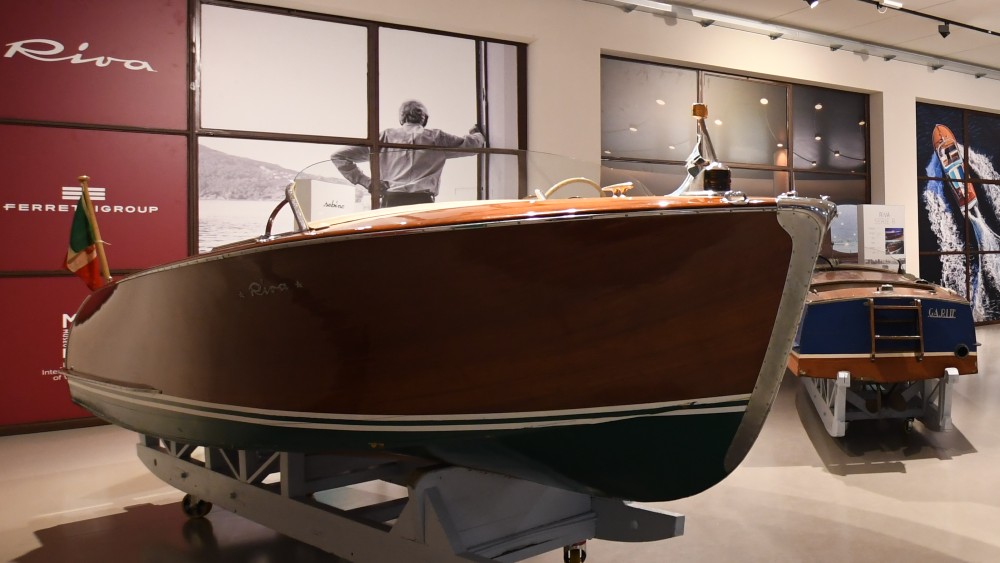 The Riva exhibition room at Lake Como’s International Museum of Vintage Boats has seven mahogany Rivas on display, along with a timeline of its launches. Courtesy Riva Yachts

“Mahogany Rivas became such a prominent item not only on the French Riviera and Italy, but far beyond Europe,” HSH Prince Albert II of Monaco told Robb Report recently. “The Aquarama was so visible in Monaco that it became closely linked with our maritime heritage.”

Riva last year produced a book called “Riva in the Movies,” which chronicles the 50-plus movies in which a Riva boat has been used as a prop. In the U.S., Lake Tahoe has become the main gathering point for vintage Rivas, though Lake George and South Florida also have their collectors.

“The first ride was incredible. You couldn’t peel my hand off the steering wheel,” says Jeff Peterson, owner of the Aquarama Portofino on Lake Tahoe. Peterson says the combination of beauty, ride and comfort all make the Aquarama the iconic runabout. “The engineering is something very, very special.” 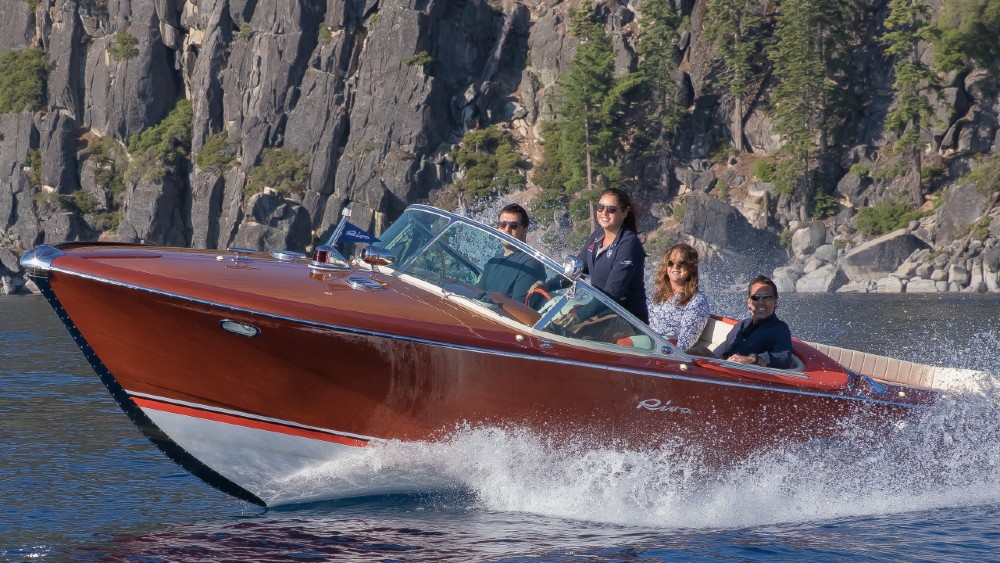 The Aquarama has become the icon of the Riva brand, with owners around the world. The Peterson family enjoy their Aquarama “Portofino” on Lake Tahoe. Courtesy Steven Lapkin/www.h2omark.com

Carlo Riva, who became one of yachting’s most famous figures, developed the brand’s most celebrated models, including multiple series of Aquaramas, Floridas, Tritones and Aristons, along with a series of large motoryachts built with Feadship’s DeVries shipyard in the Netherlands.

Carlo was preceded by his father, Serafino Riva, who was famous across Italy for building high-performance racing boats. The collection includes HaLu, a Riva from the 1930s when Serafino still ran the family shipyard. The boat is probably one of the oldest and best-preserved vintage Rivas in the world.

Two Riva Series R models, the first to come from a small production line, were built a few years later are also on display. A rare racer fitted with Guzzi engines is in the exhibit. A Riva Florida, built under Carlo’s watch, is shown with special Scottish Madras upholstery. 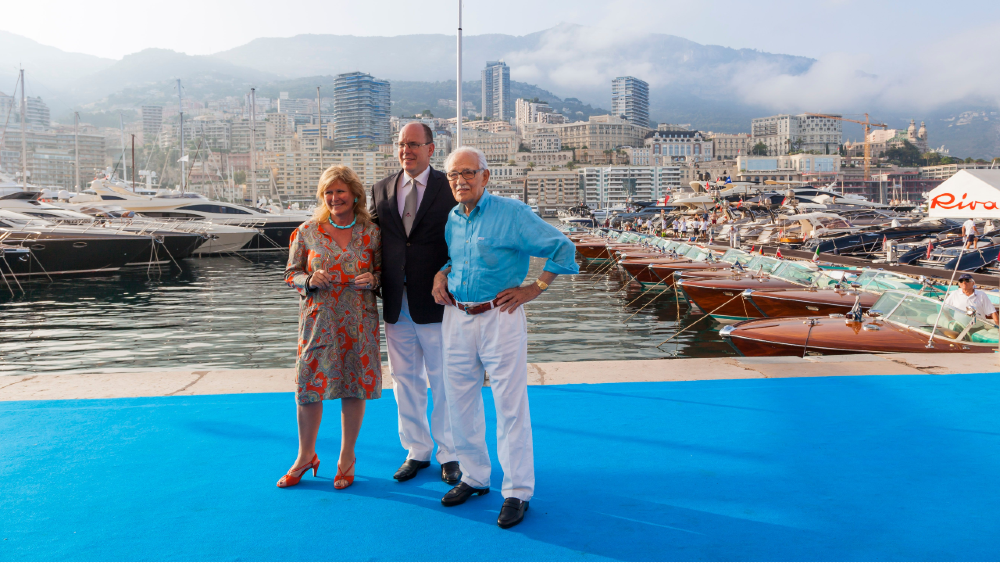 The historical timeline also includes a series of traditional molds used to produce hulls. The display also includes the short film called “Riva In The Movie,” which was presented at the 77th Venice International Film Festival.

The Riva mahogany boats have become collectors’ items, with values increasing each year. A 1965 Aquarama Super, hull 175, fetched $750,000 in 2010 at Mecum auction. A year later, one of the last Aquarama Specials built, owned by Sony Corp., sold for $995,000, with bids coming from around the world.