9 Automakers who tried their hands at boats. Yachts, river cruisers, concepts and other fancy floaters like this US$3.74-million Lexus 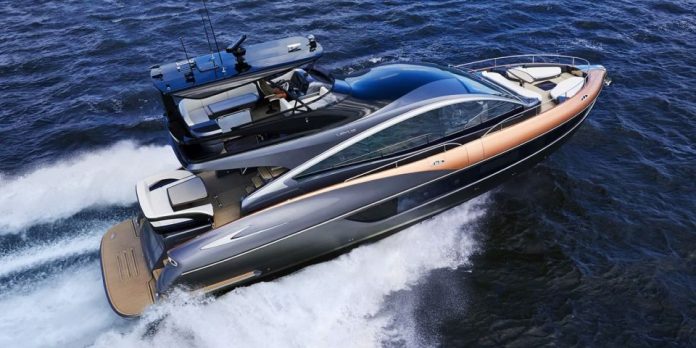 It only makes sense that when a brand that focuses on wheeled vehicles decides to branch out, it looks to the open seas.

Lexus did it last year when it debuted the LY 650 luxury yacht, but it was hardly the first. Other top-shelf brands like Aston Martin, Maserati, Jaguar and even Ferrari have all brought luxury boats to life. So have more humble makers like Toyota, Skoda and GM.

Here are some of the automotive world’s most memorable attempts at breaking into the boating industry.

Lexus’s first luxury production yacht, the LY 650, made waves when it debuted in 2019 with a price of US$3.74 million. The Japanese luxury carmaker developed the boat with Italian yacht design house Nuvolari Lenard, building on the coupe-like design language laid out by the 2017 Lexus Sport Yacht Concept.

Built by Wisconsin boatmaker Marquis Yachts, the 65-foot cruiser is powered by two Volvo Penta IPS 12.08-litre engines, each making 1,350 horsepower, and boasts three berths with a private head and shower in each; and a specially fabricated hull made from carbon-fiber-reinforced plastic and glass fiber-reinforced plastic. Fancy boat for fancy people.

If you’re going to own one or more Bugatti Chiron cars and you live near an open body of water, first of all, you might as well pick yourself up one of the French brand’s US$4 million matching yachts, the Niniette 66, and second — let’s hang out some time?

Yacht builder Palmer Johnson brought Bugatti’s vision to fruition with carbon fibre, wood, marble and leather in the interior and a profile and two colour schemes that match the Chiron’s. The 50- to 80-foot boat Niniette 66 is the first of a series of three watercraft promised by Bugatti.

General Motors’ aquatic arm, GM Marine, had been supplying engines to boatmakers for decades before it finally decided to test the waters of production for itself with the Forward Marine First electric pontoon that debuted at the Miami International Boat Show in 2019.

Using tech borrowed from the Chevy Bolt EV and a 60-kWh battery pack, the Forward Marine First is good for around 10 hours of silent cruising at 20 mph (32 km/h). Passengers can view the electric propulsion system through the transparent floor on the deck. The 24-foot e-pontoon is just a prototype and not for sale — for now.

If you’re looking for a relaxing day on the water, don’t climb on board one of Maserati’s offshore foiling raceboats like the Multi70. You will find yourself wet, windswept, jostled and, unless you know your way around a racing boat, in the way.

Italian yacht racer Giovanni Soldini is the skipper of the luxury automaker’s latest sea racer, which has been slicing waves and winning races sometimes longer than 1,000 km around the world (but mostly in the Caribbean) for the last few years.

Mercedes-AMG and Cigarette Racing entered into a collaborative partnership in 2007 and have produced 12 special editions since, including most recently the 59-foot Tirranna AMG Edition. A set of six supercharged V8 engines combine for a total output of 2,700 horsepower, which, despite the boat having a full cabin downstairs and seating for 26 on deck, can get the craft up to a top speed of 80 mph (129 km/h).

What sets this one apart from its predecessors is the one-off G-Wagen, the G63 Cigarette Edition, that was developed alongside it.

In North America, Toyotas are strictly land-going vehicles, but not so over in Japan. Not only does the brand’s home nation get wheeled models we don’t over here, but they also get boats. To date, Toyota has built three rather classic-looking coastal vessels: the Ponam 31, Ponam 35 and Ponam 28V.

The 28V, the most recent addition from 2016, is a 30-foot cruiser with a 3.0-litre four-cylinder turbo diesel borrowed from the Land Cruiser/Hilux pick-up. The Ponams are all built by Japanese manufacturer Yanmar and are for sale exclusively in Japan.

Designer Ian Callum left many design legacies at Jaguar when he departed the company in 2019. Back in 2012, he applied the tenants of “speed and beauty” not just to the then-new Jaguar XF Sportbrake, but to a speedboat concept revealed at the car’s first-drive event.

The not-so-creatively named Jaguar Concept Speedboat was co-developed with Seventy Seven Design and Ivan Erdevicki Naval Architecture & Yacht Design to showcase how Jag’s style and energy could translate into a sea-going craft. The boat features a polished aluminum propeller, teak decking and a 2+1 cabin and seating.

Czech carmaker Skoda promoted its Skoda VisionC coupe concept in 2015 with a lime-green power yacht styled in its image. The Skoda VisionSea is a “10-metre-long water bullet” with a sporty vibe (complete with retractable water ski hooks) and a hybrid drive featuring a 180-horsepower engine paired with an e-motor producing another 270 horsepower — that’ll take it 50 nautical miles on e-power and another 980 nautical miles using the direct-injection engine as well.

The 37-foot AM37 debuted at the 2016 Monaco Yacht Show as Aston Martin’s first waterborne product. The makers of the One-77, Vulcan and DB11 put their design expertise to work on the boat, creating a floating representative of the British brand’s luxury style. As a day cruiser, the AM37 contains an overnight berth/bed that doubles as a table during the day; amenities like air-con, a kitchen with microwave, fridge and coffee machine; and luxury features like leather seating and a handsome wood deck.

The first AM37 boat owner to take delivery allegedly cashed in on the Q by Aston Martin customization service to get a personalized interior in Baltic Blue and cream leather with chrome embellishments.

In 1990, Ferrari teamed up with iconic Italian boatmaker Riva to produce a set of 40 speedboats. The Riva Ferrari 32 is a 32-foot-long speeder with Testarossa-style air intakes and a classic Ferrari red paint job.

It’s capable of 60 mph (96 km/h) thanks to two Vulcan 400 marine V8 engines. One of the red classics went up for sale at a 2018 RM Sotheby’s event in Arizona year where it fetched US$69,000, which seems affordable as far as classic Ferraris go.