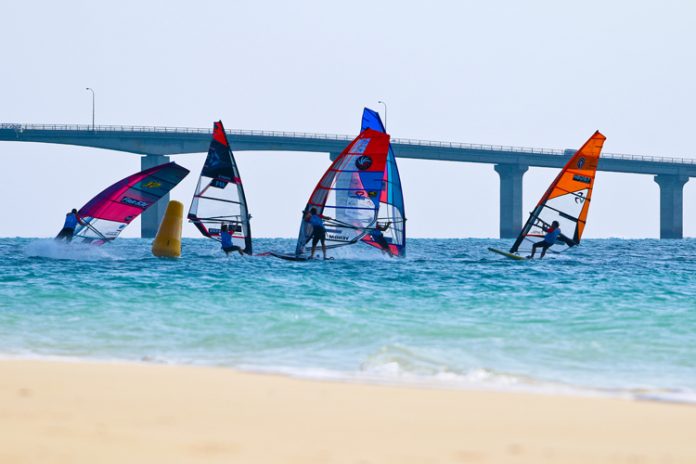 In the late 80s and early 90s, windsurfing was the hottest sport in the world. On windy days, sailing spots on oceans, bays, lakes, and even rivers were packed with sailors who had ditched work to sail. Windsurfers covered the spectrum of humanity, from doctors and lawyers and other business professionals to lowly sail bums (who were usually the best sailors). Seemingly everyone had to get in on it (similar to the first wave of mountain biking in the 80s, but that’s another story). Every beach town had 3 or 4 windsurf shops and an array of sailing beaches, places where experts could rip and beginners could rent gear, take lessons, and learn the intricacies of the sport, often by observing the hard-earned skills of the proficient riders.

A little background: It took money and it took gear to be a windsurfer. Most riders had at least two boards, one for general use (14 to 20 knots of wind) and a high-wind board (20+ knots). A high-wind board was shorter and lighter than a regular board, making it faster and more maneuverable and — importantly — jump-able. Boards cost 800 to 1500 dollars apiece. Additionally, most sailors had 2 or 3 masts ($200–300 each), several booms (same price as masts), a harness ($50–150), a quiver of sails, and a plethora of other (fairly expensive) doodads necessary to rig up and go sailing.

Sails are measured in square meters of area, so a 6.4 square meter sail (or a “six-four”) would be good for a sailor of my size (210 lbs.) in about 15 to 18 knots of wind. When the wind went up to twenty, the six-four would be too big to handle, so I’d drop down to a six-oh or even a five-five. Kick the wind up to 25 and I’d be on a 4.7. Three or four times a year (in my home area of the mid-Atlantic) when the wind kicked up to above 25 or even 30, I’d need a tiny little 4.0 or even a 3.7. So I had four or five sails that cost $400–600 each in addition to all the other gear. Then I also needed a vehicle with roof racks and some storage space to tote all the gear around. Every “serious” windsurfer had as much gear as I did, and many had more.

This was the early nineties, when the internet was just being created. The first thing I remember being sold online was windsurfing gear — specifically, sails. At the time, we could buy sails in our local shop, but many bought gear on trips to high-wind sailing venues like Hatteras or Florida or, on the west coast, the Columbia River Gorge. In those places, windsurf wholesalers could afford to keep large inventories of boards and sails on hand and sell them at more competitive prices. At first, these wholesale houses advertised in print. You could see the gear in magazines like Windsurfer, call the warehouse in Hatteras or the Gorge, buy a sail over the phone, and have it shipped to your home. It worked, but the process was cumbersome and disconnected.

Then the internet came along. We got used to buying things online. The regional discount warehouses had already cost local shops a portion of their sales, and as more and more gear came available online, the local shops saw their sales drop precipitously. While a number of shops carved out a large portion of their income from lessons and rentals, it wasn’t enough to sustain survival for many of them. Shops began to close. When a shop closed, its associated sailing beach also closed, or at least the rental/lesson site went away.

A sailing beach on a windy day was a dynamic place. The parking lot would be filled with gear-laden 4x4s and lots of stoked water athletes. Riders on their colorful rigs could be seen jamming out to the horizon and back, screaming toward land at full speed before carving swooping hot-dog jibes in front of the beach as they turned around to head into another run. Beginners could rent boards and take lessons right on the beach. This scene was repeated up and down the coast on windy days, and even on days when there wasn’t much wind, the conditions were favorable to learning.

People driving by on the coast highway would see this all happening. Curiosity aroused, they might pull in and watch the spectacle. Then they’d invest in a rental and maybe lessons. After a few times out, they’d buy some used gear at a swap meet. Once they had the basics down, they’d want new gear to match their skill and open their way to a higher level of sailing. This is how windsurfers were created.

When the shops couldn’t keep up with internet sales, they began closing. Remember, this was the first wave; small businesses have learned to cope with these problems now to a certain extent, but in the 90s it was a relatively new phenomenon, and it came on very quickly. When the shops closed, the rental/lesson sites went away with the sailing beaches maintained by the shops. When the beaches went away, the place for new enthusiasts — beginners — was removed. With no beginners, there was no one feeding into the sport to maintain it. And with no one to maintain it, windsurfing basically just went away.

What happened to the experts? Several things. First, many of them moved on to other sports or other things. After a few years at the expert level, some sailors felt they had done it all. They tired of lugging all the gear around, of spending all their vacations at sailing spots, of going to the trouble of loading up their gear and heading to the beach only to have the wind drop to below rideable levels (a frequent occurrence). Or they got married or bought a house or had a kid, or all of these, and they found they sailed less and less. They were lost to the natural attrition that happens in any sport.

Secondly: kiteboarding. Kites started showing up on our sailing beaches in the early nineties. Many expert windsurfers were attracted to this new extreme sport and made the jump to the kite. But the first generation kites were little more than prototypes; they were hard to control and dangerous. There were few safety features to counteract the immense power of the kite. De-power systems, which release the kite when the rider is overpowered, had yet to be developed. People got hurt. But gradually the kites got more controllable and safer, and more windsurfers became kiteboarders. So while the beginners were gone because the shops closed, the top end riders were either switching to kiteboarding or leaving the sport altogether.

Nowadays, windsurfing is thriving at a few places around the world: San Francisco, the Gorge, Tarifa in Spain, the Canary Islands. But in the US, there are virtually no sailing hotspots in the countless beach towns where the sport once thrived. In Hatteras, the shops that specialize in kiting and Stand Up Paddleboarding (the current beach craze) have a small section of sailboards and sails for the few hold-out aficionados. Foil-boarding is the next sport coming up on the horizon for those of us interested in cool new ways to play in the ocean. People move on, as they should.

So how did the internet kill windsurfing? By taking the money out of it. First, the money went out of small shops, lost to the online retailers. But the shops’ customers were the clients of the online sellers, and when the shops stopped generating customers, the online sellers gradually lost their sales. Little by little, windsurfing in America went away. Sailors moved on to kiteboarding, SUPing, and now foilboarding. Retailers sell what they can sell, and there are many more online SUP (stand up paddle) retailers online right now than windsurf retailers. And even they are fighting a battle of attrition, as the market is flooded with junky, non-performance gear aimed at the recreational weekender market rather than the dedicated waterman/woman.

People used to say, “I don’t get it about windsurfing. You just go back and forth all day.” And we would answer, “You don’t get it because you don’t do it.” Windsurfing was pure fun, every minute, like surfing or skiing or snowboarding or mountain biking. It happened at a certain time in a certain atmosphere, beginning with the earliest prototypes in the mid-70s and peaking two decades later in the mid 90s. It ran its course and was, perhaps, the first victim internet marketing.