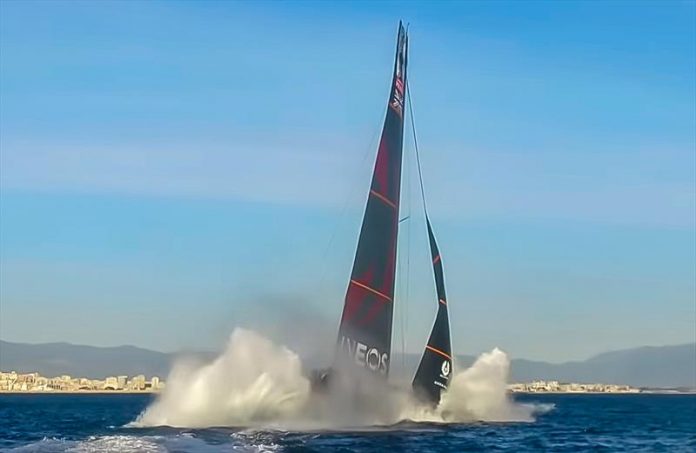 The AC75 is providing fans with some spectacular shows as the crews learn to sail the challenging foiling monohull.

The Kiwis did a spectacular “Sky Jump” as 75ft Te Aihe leapt clear of the water, just before Christmas, before slowly capsizing.

On February 1, at their winter training base in Cagliari, Sardinia, INEOS Team UK’s Britannia performed a series of spectacular manoeuvres, before spinning out – all captured on video from the chase boat.

Britannia’s helmsman, Ben Ainslie talks through the incident, giving an interesting insight into the forces at play in the AC75, and how every action by the crew often has an opposite reaction as the foiling physics take charge.

The timings below underline the fact, that some very quick, and instinctive reactions are required of the helmsman and crew – skills learned and honed from the team’s sailing simulator

(0.03) “We were going for a bearaway. In these boats, a bearaway is probably the most dangerous manoeuvre we ‘ve got in the playbook.”

“As the boat heels, it loses its righting moment – and even more as it heels to leeward. Then it starts rotating around the foil arm and begins to lift out of the water – so it is a double whammy effect.”

(0.08) “We’ve got through the worst part of the bearaway, and I either came down too low, or the wind died a little bit, or whatever, and the boat started coming over to windward. When that happens, the righting moment starts coming back on very quickly. And, the more you heel to windward, the more righting moment you get, and also the boat is coming low in the water. “

(0.09) “In that situation, you’ve to do a reasonably sharp turn up to power the boat up again. Unfortunately, in that scenario, the moment we did that we got whacked by a big gust and with those factors combined – you can see how quickly the boat powered up!”

(0.11) “I turned down to try and save the situation, but there was just no way it was coming back – it was a major stuff.”