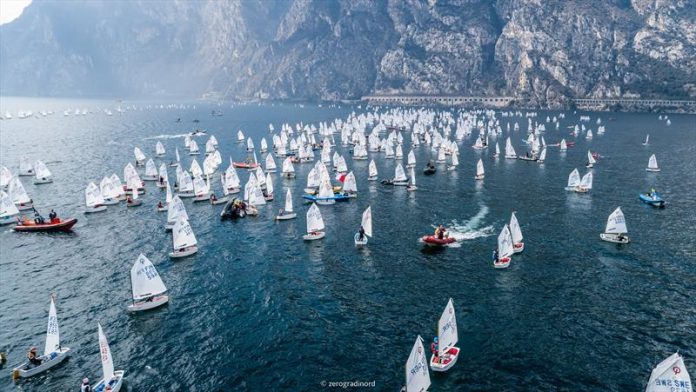 Despite the awareness that the historical moment we are going through is among the most complicated ever and that the protection of the health of all the young sailors and everyone involved in the competition is a priority, Fraglia Vela Riva sends a message of hope for what concerns the 2020 edition of the Lake Garda Optimist Meeting, originally expected to take place right in these days.

The management of Fraglia Vela Riva is in fact looking ahead, firmly determined in staging the 38th edition of its most representative event again during 2020. The Garda Optimist Meeting, traditionally expected during the Easter weekend, at the spread of the Covid-19 epidemic has already been postponed to June (11-14). In case these dates won’t be confirmed, Fraglia Vela Riva will do anything in its possibilities to postpone the event once again.

“Right now we do not know if we will be able to take advantage of the window which we had been assigned for June. It goes without saying that, as the days go by, the possibility of organizing such an event in such a short time is slowly slowly fading – explains the President of Fraglia Vela Riva, Alfredo Vivaldelli.

“We are also aware that being able to call the youngest together, engaging them in an event such as the Garda Optimist Meeting at a reasonable distance from the conclusion of this emergency, would be an extraordinary message of hope and rebirth.

All the members of Fraglia Vela Riva live with great difficulty the idea of a season without the sounds, colors and emotions of what we consider a flagship event not only of our calendar, but of the international sailing world, and that is why we wait patiently for the conclusion of this dramatic and troubled period to find a new date in which to give an appointment to our many participants.

We are fully aware that it can never be an edition with high-sounding numbers, but this aspect is overshadowed by the need to return organizing regattas and involve athletes, enthusiasts and professionals at our headquarters, which, as sailors and guests of sporting events, it is part of our DNA “.

Information about a possible temporal rescheduling of the 38th Garda Optimist Meeting will be given as soon as available.