HomeEventsRegattaThe Ocean Race: the time to focus on the Ocean is now
Regatta

The Ocean Race: the time to focus on the Ocean is now 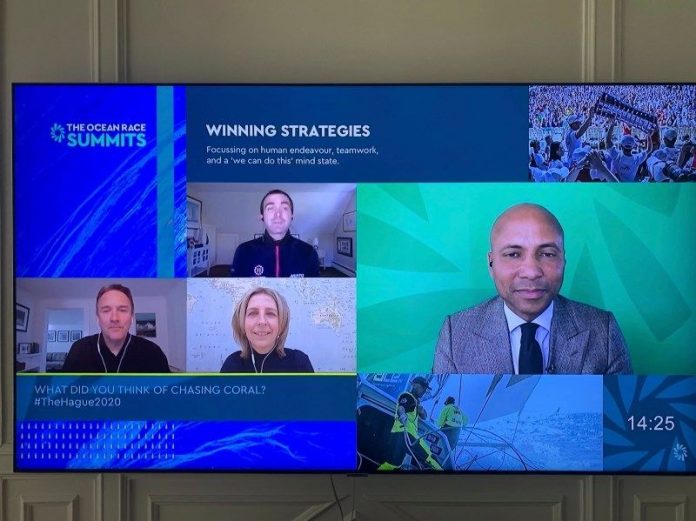 Ocean health is critical for the long-term well-being of the planet and developing winning strategies to implement science-based solutions is the best way forward towards restoring our ocean.

That was the message from The Ocean Race Summits #2, the latest in a series of events developed in collaboration with 11th Hour Racing, the Founding Sustainability Partner of The Ocean Race.

In response to the COVID19 pandemic, which made an in-person event impossible, the Summit was streamed online, hosted live from The Hague on Wednesday afternoon.

“The future of our seas after the (health) crisis could be quickly forgotten if we go back to the same patterns as before,” said H.S.H. Prince Albert II. “We need to take advantage of the situation and make a concerted effort for the ocean, without delay.”

This was one of the themes of the Summit, with a focus on winning strategies to create action for change.

Youth were represented by the Dutch wavemakers, a youth environmental group, whose members joined as panelists in the Action Labs, while co-host Niek Roosen, a social media influencer, actor and WWF ambassador engaged Summit participants with polls and commentary, bringing the content to life.

Dr. Wallace J. Nichols is a leading researcher, author and proponent of Blue Mind, which shows the science behind how being near the water improves our health. Realising the importance of this relationship with the ocean, he says, can be a key driver of change.

“We want everybody to understand the ocean gives us so much in terms of ecological and economic benefits. But it also gives us these massive, measurable, critically important emotional benefits,” he said during a panel on The Science of Action. “When we properly value the ocean for all of that it gives us, then I think we’ll start to repair what’s broken.”

Peter Thomson, the United Nations Special Envoy for the Ocean, told the Summit progress is being made towards restoring ocean health through the internationally agreed UN Sustainable Development Goals (SDGs), but consistent effort is needed.

“We have to understand that our ocean is in trouble and that it’s within our means to fix that and reverse that trend… All of our governments have agreed to sustainably use the ocean’s resources,” he said, referring to the SDGs. “But we must stay faithful to implementing them.”

Minna Epps, the Director of IUCN’s Global Marine and Polar Programme, agreed having targets to aim for can be one of the keys to achieving change. But also important is a shared focus on what we should prioritise as a community.

“Let’s actually take this opportunity to stop, recharge, rethink and refocus on what we want the world to look like,” she said, in reference to the current health crisis. “We want the world we find to look different than the one we left behind. And I think it’s never been more evident the importance of people and planet and today we have that opportunity.”

“There are a few things that have come out of this pandemic,” Lord Sebastian Coe, an Olympic gold medalist and the head of World Athletics, noted. “Firstly, the planet is breathing more easily. You look at our large cities and we have reversed some of the air cleanliness for the first time in 40 years… People are talking about the climate, the environment, ecological issues in a way they weren’t beforehand.”

Sport also has a role to play in driving change and Richard Vevers, the filmmaker behind Chasing Coral says it can be a key driver and motivator.

“There really is a formula for achieving action,” he said, reflecting on his film, which has seen over 90-million dollars invested in coral reef conservation as a result of the emotional connection viewers have with its message. “You need optimism and excitement and it’s excitement especially that is really needed to get to a state of action. That’s where working with partners like The Ocean Race makes all the difference. It’s the epitome of excitement and conservation generally doesn’t bring that level of excitement.”

Charlie Enright, the co-founder of 11th Hour Racing Team and a two-time skipper in the Race says he’s seen first-hand how leading brands want to utilise the adrenaline fuel of ocean racing, along with a clear focus on sustainability, to tell a story with purpose.

“Sports sponsorship is changing, it’s becoming a lot more cause-based, particularly in ocean racing, and this is how our team is built with 11th Hour Racing,” he said. “As athletes we have the responsibility to lead by example. I think that’s built into the way that we work with our partners, the way that we challenge them, the way that we try to enact change, the way that we’ve prioritised ocean health and sustainability in our organisation. It doesn’t happen by accident. We spend a lot of time on this. It takes a shared goal, a shared vision to start moving the needle on these global issues.”

As the CEO of Verizon, with over 130,000 employees, Hans Vestberg sits on the other side of that sponsorship table, but he agreed that having a larger purpose was now a basic necessity for companies like the one he leads.

“Today, I think that many companies are thinking about connecting purpose with their employees and with their customers and having society as part of their main strategy instead of having it as philanthropy or something like that,” Vestberg said. “And that has changed dramatically. That goes for Verizon as well, all the constituencies around us are asking for it. Whether it is our employees or our customers, all of them are asking for us to be purpose driven and that’s where we’re going.”

The Ocean Race Summits #2 featured many more topics and speakers and a full replay is available on www.theoceanrace.com

On May 26, 100 industry leaders, including representatives from the IOC, UEFA, Formula E, FIFA, World Sailing, and the World Economic Forum, among many others, came together for an Innovation Workshop to develop solutions to the challenges faced by the sport and event industry, focusing on Sustainable Look and Overlay and The Future for Reusable Serviceware Systems at events in a post-COVID19 world.

On Thursday, following up on today’s Summit, a second Innovation Workshop is scheduled with a focus on creating moments for change. Sports, events and business leaders will gather in a unique workshop to develop winning strategies to restore ocean health and abundance, inspired by the spirit of ocean racing.

The Ocean Race Summits are a series of solutions-focussed events bringing together leaders from a wide range of fields to target the restoration of ocean health. The current series of Summits started in Genoa, Italy last autumn and will continue with two further events this year, including one based out of Newport, Rhode Island in September. Up to ten events will be held before the conclusion of the next edition of The Ocean Race.