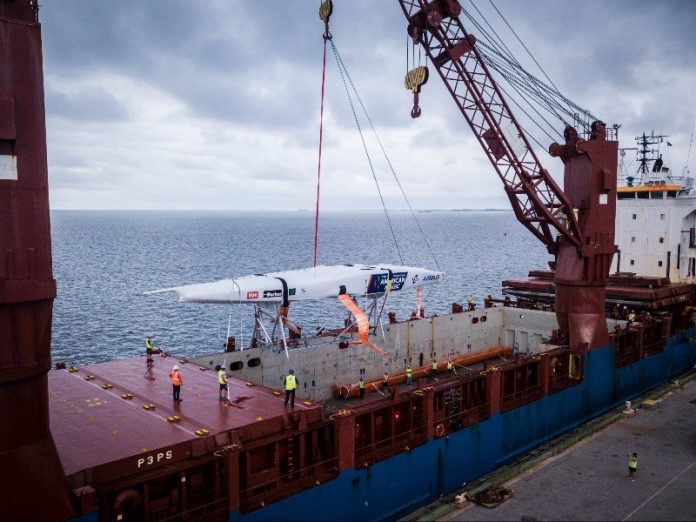 Pensacola, Fla. – Defiant, the groundbreaking AC75 racing yacht built for New York Yacht Club American Magic, departed the team’s winter base at the Port of Pensacola late in the evening on Wednesday, May 27th, 2020. Stored onboard a commercial cargo ship, the AC75 and a significant volume of additional equipment are headed for Auckland, New Zealand, venue of the upcoming America’s Cup World Series Auckland (December 17-20), the Prada Cup (January 15 – February 22, 2021) and the 36th America’s Cup (March 6-21, 2021).

The departure of the U.S. Challenger for the America’s Cup from its Gulf Coast base, where the team has logged over 70% of its on-the-water training days to date, is a significant milestone in the campaign to reclaim the oldest trophy in international sports.

“It’s hard to overstate the positive impact Pensacola has had on our team, and we are massively grateful to Mayor Grover Robinson and his staff, Port Director Amy Miller and her staff, Commodore Nicole Ferry, the entire membership of the Pensacola Yacht Club and our wide network of suppliers, supporters, fans and well-wishers in the area,” said Terry Hutchinson, Skipper and Executive Director of American Magic. “We feel pretty strongly that Pensacola will continue to rise as a sailing venue in the U.S., thanks to some awesome natural features, the consistent weather and a welcoming community. Pensacola really took care of our team at every stage. While it’s sad for us to leave, we’re excited for what lies ahead of us in New Zealand. Our future is there.”

American Magic’s presence and impact has been felt in several areas around the U.S since the team was founded in 2017. New York City is the home of the New York Yacht Club’s 44th St. headquarters. Multiple cities in Rhode Island, all with deep America’s Cup ties, have had key roles in the campaign including Newport, Portsmouth and Bristol. The two boats launched by the team to date, including the AM38 test boat, known as “the Mule,” and the AC75 DEFIANT, were built in Bristol. Both made history on Narragansett Bay with their christenings and commissioning sessions before heading to Pensacola for further testing.

The team’s forthcoming second AC75, whose name has yet to be revealed, will break this trend. When completed later this year, the racing yacht will be transported directly to Auckland from Bristol prior to its christening and launch. In the meantime, American Magic intends to sail DEFIANT on Auckland’s stunning Waitemata Harbor and Hauraki Gulf while operating from a new base on Wynyard Wharf.

As with all major sports worldwide, the COVID-19 pandemic has significantly impacted the 36th America’s Cup cycle and each of the teams involved. After the cancellation of the two ACWS events in Europe, American Magic was unable to sail on Pensacola Bay past early March. The team ceased on-the-water operations to protect the health of team personnel, their families and the surrounding community in Pensacola. Fortunately, the team was able to make progress in areas such as design, production, maintenance, logistics, and others while carefully adhering to state, federal and CDC health guidelines in its areas of operation.

While it remains to be seen when New Zealand will open its doors to foreign America’s Cup personnel, Hutchinson said that shipping DEFIANT to Auckland now was the only choice for the team once all logistical factors were considered.

“We can’t stay in Pensacola due to the approach of hurricane season. From June 1st onwards the team is uninsurable in the panhandle of Florida,” said Hutchinson. “Shipping now, and getting to Auckland in June, will allow us to resume training on schedule.”

Health considerations remain at the forefront, but the team remains optimistic about an early-to-mid June arrival. “We fully understand and respect the caution and care that the government in New Zealand is showing in response to COVID-19,” said Hutchinson. “When we are allowed to enter New Zealand, American Magic will of course adhere to all quarantine and heath protocols and do whatever it takes to be responsible members of the community. Nothing is more important.”

Hutchinson said that the team has also noted positive developments in recent days, with key individuals and projects that benefit New Zealand and its economy being granted entry. “This gives us a lot of hope that our plans to arrive in early-to-mid June may be able to proceed,” said Hutchinson. “We were proud to be the first team to challenge for the Cup when Challenger entries opened, and we will be proud to be the first Challenger to arrive in Auckland. In order to participate, we have already invested significant resources into the Auckland stage of our campaign. We’re looking forward to benefitting from that preparation, making a positive impact on the city, and joining Emirates Team New Zealand on the water in July.”

DEFIANT, no stranger to flight operations