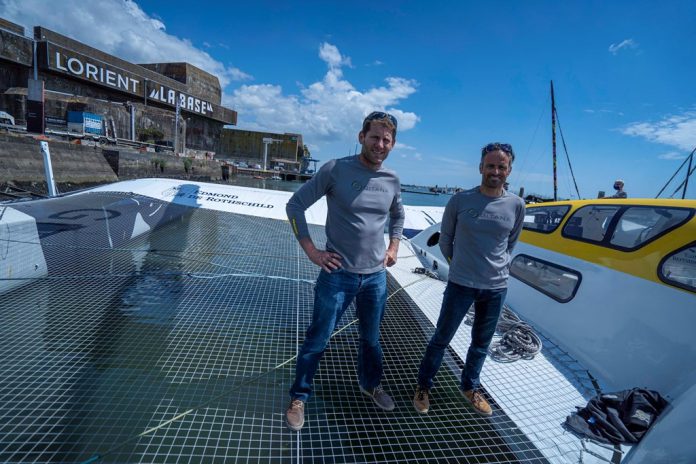 Lorient, Monday, June 08, 2020 – There is surely no better way to kick off the week than to get back on the pontoons again and reunite with the ocean in just a matter of days, particularly on this Monday 8 June which marks World Oceans Day! Six months have elapsed since the Maxi Edmond de Rothschild last dipped a figurative toe into it… an eternity for her skippers and all the members of Gitana Team. The smiles, disguised as they were beneath their navy blue masks in the colours of the racing stable, were still evident in the eyes of the technicians. However, optimum use has been made of this extended refit period, which has comprised the continued technical development of both the 32-metre giant – aerodynamics has taken up a lot of room over the winter – and also of Franck Cammas and Charles Caudrelier, to ensure they are able to get going as quickly as possible with the crewed training sessions with a view to the Jules Verne record attempt this coming autumn.

The month of March was supposed to mark the end of refit for the five-arrow giant, however in light of the health crisis caused by COVID-19 and the two-month lockdown which completely reshuffled the cards, the team led by Cyril Dardashti had to adapt its schedule. Indeed, the year’s two refits have been grouped together into one and the Maxi Edmond de Rothschild has switched over to her crewed configuration programme with a view to the Jules Verne Trophy. This episode demonstrates a certain resilience and evidently, today more than ever, this would appear to be a crucial asset going forward. “When we were in lockdown in mid-March, like the vast majority of the French population, we were just days away from our relaunch. The Maxi Edmond de Rothschild was ready to go in her solo version. We had to rally ourselves back together, take the bull by the horns and scratch our plans for The Transat… Once again, we’re hugely lucky to be supported by our owners”, admitted Cyril Dardashti.

The Brest Atlantiques, a victorious debut for the skipper pairing of Cammas – Caudrelier, enabled a sizeable jobs list to be drawn up for the technical team. Over the winter, the five-arrow stable turned a corner with the fine-tuning of the Verdier design launched in 2017. As Franck Cammas noted at the time “the devil is in the detail” and nothing has been left to chance in the bid to make precious gains in performance, which will make a difference in the record attempt at the end of the year: “At first sight, it would seem that there are no major changes aboard, at least nothing that jumps out at you! However, that’s what’s really interesting, as we’re now at the sharp end of the fine-tuning phase where it’s the sum of the parts which I hope will make a difference. On paper, it’s massive and I believe that we’ll very quickly make a giant leap forward in the speed of the Maxi.”

Innovating and preparing the way forward… this has been the true DNA of the Gitana 17 project since its genesis three years ago. This year, there are the usual new features in terms of the aerodynamics, a subject that is particularly close to the heart of both the sailors and the team’s design office. Franck Cammas details the developments: “Following on from the very successful fairing on the aft beam, it was time for a slight revamp of the area in front of the forward beam: some aerodynamic covers were installed, which enabled us to lower the forward trampolines. The approach is the same, namely reducing our drag as much as possible with the obvious gain in speed and we’re gradually applying that to the whole of the platform. In a similar vein, the cuddy has been extended and will soon be enclosed at the sides with the addition of a new fairing on the mainsheet traveller.”

“We’ve really gone into everything in detail, whether it be in relation to the composites, the deck hardware, the electronic or the mechanics… I said it at the end of the Brest Atlantiques, I’m in love with this boat and the 2020 version of the Maxi Edmond de Rothschild is going to be extraordinary, especially given the fact that we’ll be setting sail on the Jules Verne with new foils”, adds Charles Caudrelier.

“Inevitably, there has been some disappointment before getting to where we are now! The Transat was the main event of the start of the season and, for me especially, it was about going back to my beginnings as a singlehanded sailor, some ten years on from my last race of this kind. I was really keen and eager to see what I was capable of doing in solo format on this incredible boat. The team, and Cyril who manages it, very quickly adapted themselves to the changes, which were beyond our control. Together, we quickly rallied ourselves together again to envisage how we would take things forward. We’re extremely lucky and it’s amazingly positive to have a goal like the Jules Verne Trophy for the second half of the season”, stresses the skipper from Aix-en-Provence, who’s not the type to look behind him for too long.

In barely five months’ time, it’ll be time for the Jules Verne Trophy! Suffice to say, that the run-up to that promises to be intense for the sailors in Gitana Team.
The first to secure a sub-50-day time in 2010 with his crew on Groupama 3, Franck Cammas can legitimately lay claim to a sub-40-day time ten years on. In any case, that’s the aim Charles Caudrelier has set himself together with the members of Gitana Team. “It’s important not to trivialise this Round the World. It’s the Ultime challenge, the fastest and most open round the world. However, I have a perfect understanding of it having devoted years of my life to it; it’s a tough record to beat, all the more so given that Francis Joyon and his crew have set the bar very high. The current record, held by Francis, is so close to the 40-day barrier that we have to aim for that. In our dreams, it’s the barrier we want to break, but that’s not the be-all and end-all. The Jules Verne Trophy isn’t just about a boat and some guys after all… It’s also has to do with the environment and the weather, which we don’t always control”, Franck Cammas reminds us. Charles Caudrelier backs up this sentiment: “That’s why you need lots of ingredients to beat the record: reliability, fine navigation and luck with the weather sequences… we’re really going to have to chase this time and to my mind the results will all depend on the level of commitment we’re capable of, especially in the deep South.”

The crew aboard Sodebo Ultim, the Maxi Edmond de Rothschild’s dockside neighbour in Lorient, has also expressed its intention of taking on this legendary crewed round the world record this coming autumn. Avidly competitive, the two skippers of Gitana Team are delighted by this news: “It’s a record and we’ll essentially be racing against the time of a virtual boat but it’s always interesting to have a rival setting sail on the same course as us. It’s a logical scenario. Our stand-by periods coincide and the idea of a planetary duel is quite appealing to us. It could really inspire emulation in the first round the world race for our flying boats!”

So it’s game on then, with the start of the weather stand-by set for 1 November 2020. In the meantime, Gitana 17 and her crew might well benefit from some other races like the Record SNSM, for which the starting line is open throughout June, and the Drheam Cup, which is scheduled to start in late July with a course specially designed for the Ultimes, to hone their weapons.