HomeSailingIDM ad Keel Week: all defending champions will be at the start
Sailing

IDM ad Keel Week: all defending champions will be at the start 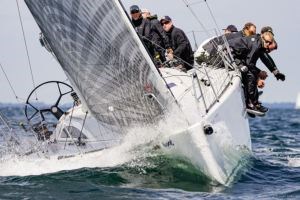 The regatta season for big boat sailors has had a late start. The corona pandemic has so far restricted sports competitions with more than two people on board. Now Kiel Week (5-13 September) offers big boat sailors the opportunity to measure their strength against each other. The international German championship of ORCi sailors and double-handed sailors are certainly the highlights in a regatta offer that offers something for everyone: from family fun to professional sailing, from weekend missions to sailing during the entire Kiel Week.

“We have prepared a wide range even in difficult times. The safety of the participants is of course in the foreground, and therefore we will strictly adhere to all hygiene regulations and distance rules,” said Dirk Ramhorst, organizer of the Kieler Woche regattas. “It is crucial that you can sail. With the admission of the larger crew (more than double-handed), the decision was also made that the J-Classes (J/24, J/70 and J/80) can take part in Kiel Week.”

With the necessary safety distance, the start of the big-boat regattas can be witnessed live on Dussernbrook’s opening Saturday of September 5 in Kiel. From 9 a.m., the multihulls (with already five entries in the Welcome Race), the yardstick-measured yachts for the Aalregatta, the ORC Club participants in the Welcome Race and the participants in the ORCi-IDM start in front of Kiel Yacht Club. Restrictions due to the corona pandemic regulate the registration numbers. In order to comply with the regulations, not all big boats are included in Schilksee. “We have to strictly limit the number of people in Schilksee, health comes first, ”said Ramhorst. People will understand the organizers’ approach, which, thanks to the postponement of Kiel Week, will make it possible for big boat regattas to be possible here.

While the ORCi yachts will return to Kiel on Saturday, the participants of the Aalregatta and the Welcome Race will moor in Eckernförde. “Whether in the marina, at anchor or with the stern at the pier, we still clarify with the authorities,” said race manager Ralf Paulsen. In any case, as in Schilksee, there will also be no side events in Eckernförde. The number of registrations for these regattas (Aalregatta: 80, Welcome Race: 45) is limited. The Senate Prize on Thursday of Kiel Week (September 10th) and the Silver Ribbon from Friday to Saturday (September 11th and 12th) will also be shown around Schilksee. The participants of the IDM Offshore (Saturday to Tuesday) and the IDM Doublehand (Thursday to Saturday) are located in Schilksee.

The IDM starts on Saturday with the middle distance race. Moved to the Aalregatta, the participants will start in front of Düsternbrook. “We also fulfill the wish to bring sailing into the inner fjord,” said Dirk Ramhorst. In order to meet all wind and weather conditions, there are three different courses on offer, which can be sailed as required. “The main goal is to offer the athletes fair conditions and high quality regattas,” explains race officer Eckart Reinke, who has made all arrangements with the DSV, the Regatta authorities and the athletes. A maximum of eight short races will follow from Sunday through Tuesday. The first start is from 11 a.m., the last start is possible on Tuesday, September 8, until 2 p.m., so the award ceremony in Schilksee is scheduled for 4 p.m.

“I’m looking forward to the connection between Kiel Week and IDM. Kiel Week is a classic, and the IDM could almost be called Classico in football jargon,” said Bertil Balser, head of the Regatta-Vereinigung Seesegeln, at the beginning of the year. “The Stollergrund and the experienced race management around Eckart Reinke are always worth a trip,” according to the 2019 European champion on board the “Sportsfreund” (Axel Seehafer / Heiligenhafen). “We are hot for the IDM in Kiel,” said Balser. In the previous year, the “Sportsfreund” had to be satisfied with second place at the IDM, so reparation is the order of the day. “The title of German Champion is still the undisputed crown in German big boat sailing. I think we have a small bill open, ”said Balser, looking towards the season highlight. It is not certain whether there will be further regattas – a planned Baltic series, consisting of Swedish, Danish and German championships, has become difficult or impossible in 2020 and may be postponed to 2021. The reigning German champion in class ORCi III, Kai Mares, is also looking forward to the first regatta start in 2020.

The skipper of the “Immac Fram” describes it like this: “Our crew is already scratching their feet and is happy to finally get started. We started training on July 1st, three months later than normal.” Of course, defending the IDM title is high on the agenda of the Hamburg-based sailing team. This is followed by the start of the second postponed regatta, the Palma Vela. The regatta off Mallorca was moved from spring to late October. “That fits now. We were planning to move the boat to Mallorca anyway, to train there in winter, spot new talent and spend the season on the Mediterranean in 2021. Junior work is the main topic of the Immac Sailing Team around the new managing director Nic Breuer. But first of all, it is necessary to connect to 2019. Last year “Immac Fram” won all races of the IDM before Travemünde.”

Jens Kuphal, owner and skipper of the “Intermezzo,” is pleased to be able to tackle the title defense of the IDM (ORCi I / II): “First of all, we are pleased that it is even possible to hold the Kiel Week and the IDM. And if you can get something positive out of the pandemic from a sporting point of view, then surely its the quality of the field. Many teams are obviously hungry to have another highlighted event for this season.” In any case, Kuphal focuses on repeating the success of the previous year when“ Intermezzo ”sailed their first national title before Travemünde: “Why not? We will fight for it and also count on realistic chances.” The team’s level of performance is still unclear after the months of being at a standstill, but the yacht, a Landmark 43, should be ready for training in mid-July. “We hope that this will once again improve performance. And the team is well staffed.” In addition to tactician Robert Stanjek (star boat Olympic champion from London) and yacht optimizer Max Gurgel in the trimmer position, two-time British circumnavigator and Olympic athlete Annie Lush joins the team. Kuphal: “We are happy to have her on board as a pit woman. So we have a top line-up – even if we will probably only have ten men on board because of Corona, although we usually sail with eleven. ”

The appearance of the new “Halbtrocken 4.0” certainly deserves attention. Owner Michael Berghorn from Kiel Yacht Club has exchanged his X41 for a Mills 45. The offshore racer was designed by Mark Mills and was built at PCT in Dubai. In recent years, the Mills 45 has sailed under the name “Concubine” in major regattas in the southern hemisphere off Australia. The yacht came to Europe from Adelaide and is now waiting for its first use. Among their big goals are offshore regattas like participating in the Fastnet Race, and before that, Up & Down racing now in front of Kiel.

After the IDM with a full crew, the duo Knut Freudenberg / Nils Reichert (SV Flensburg) jumped into the next IDM with a First 36.7 because in the second part of Kiel Week the double-hand fleet is starting. The new Olympic discipline “Mixed Two Person Offshore Keelboat” (in 2024) is still in the construction phase. Offshore regattas with small crews (one-handed and two-handed) are very popular, but the cornerstones for Olympic offshore sailing are still vague. In addition to Knut Freudenberg / Nils Reichert, Max Gurgel and Robert Stanjek from “Intermezzo” are also sailing a second shift by racing in the German offshore championship double hand in the second half. Max Gurgel is sailing with Lena Weisskichel on the L30 “Sharifa”, Robert Stanjek and the Minitransat hero Morten Bogacki will launch a new Dehler 30od from Offshore Team Germany.

In contrast to the 2024 Olympic competitions, the International German Championship was not only offered as mixed gender. “All two-handed crews, whether mixed or not, can compete at the IDM,” says Bertil Balser. However, there will be an additional mixed classification. On Thursday, the two-handed crews start at 10.30 a.m., and from 11 a.m. the participants in the Senate Prize go on a 60 nautical mile long course. On Friday there will be 150 nautical miles on the program: the long-distance overnight journey starts at 5 p.m. in Strande and ends on Saturday at the Kiel lighthouse.

At the moment, the German champions Freudenberg / Reichert are facing five registered competitors. “Sailing for two has been enjoying increasing popularity for a long time. The time of the big crews is over. Social developments make it increasingly difficult to get larger crews to commit to sports, ”Eckart Reinke says describing the popularity of double-handed sailing.

The goal of the Dehler 30od class association, which is also started in parallel with the Senate Prize and the Silver Band, is a separate rating. The class has big goals and is “applying” for Olympic status for the Mixed Two Person Offshore Keelboat discipline. The class association expects eight boats in Kiel. Although 14 boats have already been sold in the Baltic Sea region, not all of them are ready to start. “But there is the possibility for non-owners to charter a competitive Dehler,” said Felix Hauss from the class association. It is planned that the Dehler 30od yachts will have a standard ORCi measurement certificate at Kieler Woche, in order to be able to intervene in the fight for the title of the German championship.

It is not only a special Kiel Week for the sailors, as the race management also faces new challenges. “Race managers have to train just like the athletes. Recognizing windshifts, realigning lanes and initiating appropriate maneuvers under time pressure, all of this is part of the task. Due to the closed ports and unusual regattas, the race management crews face the same challenges as the participants, namely without having to immediately perform perfectly without a lot of training,” says Principal Race Officer Eckart Reinke.