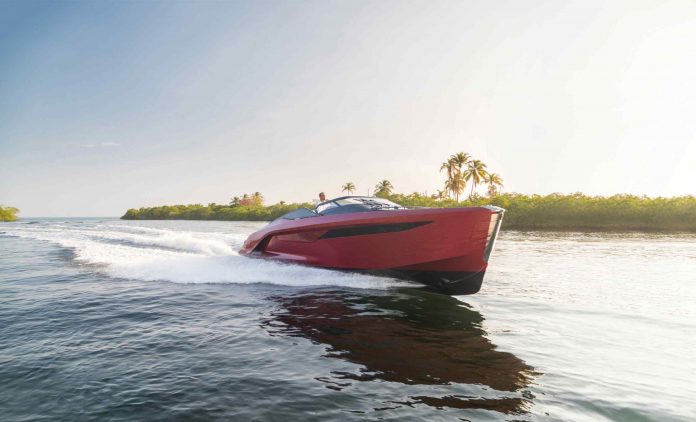 You wait years for British builders to make a fast, fun, entry-level boat – and then three turn up at once!

It was a breezy, choppy morning off Dorset’s Jurassic Coast. In a sailing boat it would have been a pleasant day in which to make some progress. In a family motor cruiser you’d probably have found it comfortable to ease back to 18 knots or so. But push the throttles home in a boat like the new Sunseeker Hawk 38 and you find yourself immersed in a different reality. It’s a beast – and a blast.

I let Chris, the Sunseeker captain, take the first shift of our sea trial while I hung on and recalibrated my personal safety antennae. At the kind of speeds we were doing – the Hawk has been tracked at 60 knots on a calm day, and we certainly saw 50 knots on the GPS – the angle at which you take the seas makes virtually no difference. Crosswind, downwind, upwind – it all felt much the same as we charged over the wave crests, faces flapping in the gale, sprung racing seats cushioning the remorseless impacts. When it was my turn, I made no attempt to see how fast the boat could go, but it seemed intent on showing me anyway, even before I touched the throttles – accelerating enthusiastically from 30 to 40 knots as I trimmed the engines out a couple of degrees to lift the hull.

Small boats built for speed are a new trend in British boatbuilding. After years of listening to people wonder why UK shipyards don’t build fast, fun, entry-level boats any more, the three top names in the UK industry – Sunseeker, Princess and Fairline – have done just that.

Of course, entry level is a relative term. The modern market, particularly in the Mediterranean, takes the needs of the “cash-rich, time-­poor” very seriously, and recent seasons have seen a new crop of high-end dayboats and weekenders crafted for people who could afford something much bigger and more complicated but prefer to keep their pleasures quick and simple. Jump aboard, start her up, zoom off for lunch and a swim.

Products aimed at this international market require aspirational design and top-quality manufacture. They need excellent engineering and plenty of horsepower. Above all, they must offer a shimmering aura of exclusivity. Everything you would expect of a superyacht, in other words – but miniaturised. British yards have been slow to catch on, but it’s fair to say that now they’re on board and have fully understood the brief.

The Hawk 38, fitted out at the Sunseeker factory in Poole, is based on a proven design used for raceboats and military craft. Its stepped hull has been modified to suit outboard motor power. The boat is beautifully detailed but, even in luxury dayboat guise, its offshore racing heritage lies just beneath the skin. It features a fearsome pair of 400hp Mercury Racing 400R engines. Towering, supercharged straight sixes, they run virtually silent at tickover, yet emit a satisfactory bellow once awake.

Princess’ offering, the R35, by contrast, is designed very specifically around a twin inboard installation of 430hp Volvo petrol V8s, coupled via carbon shafts to Duoprop drives. These engines are light, poky, powerful, electronically controlled and mounted far further forward than you might expect. Princess CEO Antony Sheriff, an ex-McLaren man, has an additional directorship at Pininfarina, and the mythic Italian studio was entrusted to work its magic on the design team’s ideas for the R35. The result is an object of sculptural sensuousness. For naval architecture, the Plymouth shipyard called in BAR Technologies, the Southampton design and tech centre behind Ben Ainslie’s raceboats for the America’s Cup. Lots of things about the R35 are unique.

The moulded scoops at the sides are intended to swoosh the slipstream aft, keeping spray off the cushions. The boat is constructed entirely from carbon fibre using the Sprint system, which requires it to be baked in a giant oven. Computers look after life on board, from the lights and sound system to the “Sport” and “Comfort” settings. It is a complicated, time-consuming boat to build. BAR Technologies was tasked by Princess to come up with something different: a sports cruiser comfortable at 15 knots or 50, cool, efficient and high tech. It was as good as its word.

And it all works. In Plymouth Sound I sat back and let the computers do their thing in “Comfort” mode as I pushed the throttles to the stops, hitting 43 knots, and wound on lots of helm. The boat turned, as directed, more and more tightly but completely controlled. As I relaxed my grip and straightened up, we powered through our wake and the software held those fine bow sections at just the right attitude to cut cleanly through. No impact, no fuss.

Selecting “Sport” imparts a more seat-of-the-pants feel, with more heel and just a suggestion of sideslip if you overcook a turn. It’s more involving and dynamic but never hints at anything untoward. The R35 has a truly tenacious grip on the water. If you knew nothing about it, you might assume from its sparkling handling that it was a traditional, thoroughbred, offshore sports boat. But then you might wonder why you couldn’t persuade it to misbehave.

And finally to Fairline’s pugnacious little F//Line 33. Fitted with the same engines and drives as the Princess, it hit a tad over 47 knots wide open during my sea trial just off Cannes. But pure speed was the least of its appeal. The advanced hull design, with a deep-V, 22-degree angle of deadrise along the keel to cut through the seas, is a marvel. Poised, sure-footed and perfectly balanced, it offers superlative handling that will make anyone feel like the most dashing offshore racer. To think it was to do it – a visceral bliss that only the most capable craft can provide.

Built in Oundle, it was styled in Monaco by the Italian yacht designer Alberto Mancini, with naval architecture courtesy of the redoubtable J&J Design from Ljubljana. Quite beamy for its length, it has a conventional-looking hull shape and plenty of internal volume, so it can boast a mid-cabin tucked under the cockpit, as well as a convertible dinette under the foredeck. This makes it more family friendly than either the Hawk or the R35, but none of the usual penalties seems to apply. As a performance machine it’s every bit as serious as the others, and as a driving experience it’s just as much fun.