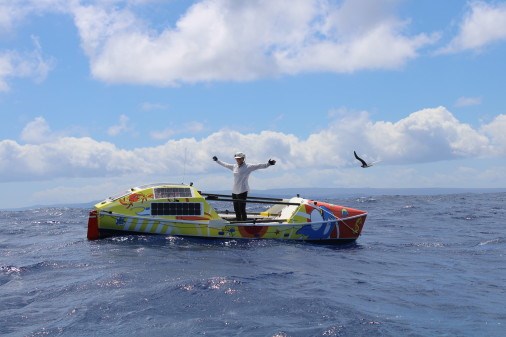 (Oahu, Hawaii) – After three months alone and unassisted at sea, Lia Ditton has set a new women’s world record for rowing solo from San Francisco to Hawaii. The 40-year-old Briton made landfall at 06.10 am 12th September, reaching Waikiki Yacht Club on the island of Oahu in 86 days, 10 hours, 5 minutes and 56 seconds to break Roz Savage’s 2008 record of 100 days. Describing the voyage as “the greatest psychological challenge of my life”, Lia logged approximately 2700nm in total distance rowed and overcame a series of mental and physical challenges, including illness before the start, two capsizes, a shortage of food, and persistent adverse currents and winds.

Lia was greeted by a welcoming group during the final stages through the Ka’iwi Channel, with further company provided by Waikiki Yacht Club members, as she completed the epic voyage to become the fastest woman in history to row solo from the US mainland to Hawaii. She plans to spend the next weeks recuperating before travelling home to her base in San Francisco. Despite the hardships, there were also moments of joy, wonder and encounters with nature, as Lia witnessed spectacular rainbows, nighttime skies, sunsets and sunrises, while sharks, flying fish, yellowfin tuna, seabirds and squid all came close, or onto, her boat at different times.

From the weeks building up to her tentative departure to the final stages of the row, Lia faced several setbacks that tested her resolve, bravery and determination to the limit. First, health concerns from an illness created doubts as preparations were starting to fall into place, forcing Lia to start the journey cautiously and quietly from the Corinthian Yacht Club, Tiburon, San Francisco at 23:00 PDT on 17thJune to test how her fitness held up in the first few days. Heading out to sea past the Farallon Islands, she committed fully to the challenge ahead with a message back to shore on 20th June, but the notorious difficulties of the Continental Shelf then almost ended her bid. For days on end, Lia fought current, wind and waves the size of buildings which all thwarted her progress, as she spent her days clawing her way west and away from the California coast to make up miles lost while drifting at night.

Lia had trained and prepared in anticipation that the row would test her mental and physical strength, but some devastating news during the early days of the voyage added another highly emotional factor to the challenge. As she faced her own battles at sea, Lia also had to cope with a message from her shore team on June 22th that fellow rower Angela Madsen had died during her attempt on the same route after 57 days.

With this reminder of the perils of lone ocean rowing in the back of Lia’s mind, her worst fears were realized on day 19 (6th July) when a rogue wave capsized her 21-foot boat and plunged her headfirst into the dark ocean. With instinct taking over, Lia quickly realised the boat was not easily turning itself back upright and climbed onto the boat using all her strength to roll the boat back herself. In the immediate aftermath of the incident, she considered abandoning the boat after a brief conversation with a passing warship, but Lia remained steadfast in her ultimate goal and continued to battle the conditions and her own fears in pursuit of the target. Four weeks later, Lia suffered her second capsize on day 52 (8th August), in mid-ocean and far from potential rescue. Thankfully, the boat righted itself on this occasion, though the negative consequences for her fragile confidence, as well as soaking all clothing, bedding and equipment, were once again debilitating.

Lia’s blog detailed the incident, writing: “There is an almighty crash and my body is thrown against the wall. I rip my eye mask off and scramble to get up but am met by a torrent of water pouring in through the hatch. ‘Get out! Get out!’ the voice in my head screams. The boat is upside down, the roof in the water. Then the boat tumbles right side up again. She self-rights.”

Lia rose to the challenge again, demonstrating the practical skills and single-mindedness that have driven her career as an ocean rower and professional sailor. To prevent another capsize, she added water ballast, flooding the cockpit bilge and sea anchor locker, but creating a heavier boat, or ‘rowing the Pacific across the Pacific’, as Lia commented in her blog. She also made a number of maintenance repairs, including changing the oarlock height after the base cracked, and conquered one of her greatest fears by twice leaving the boat to get in the water to remove barnacles.

On August 20th, she wrote: “This voyage continues to be the greatest psychological challenge of my life – rowing the boat from which I was thrown into the sea, the boat in which I woke upside down water gushing in through the exit door. I spend my days climbing out of a mental hole, only to find myself back in the hole the next morning. When wind, wave and current conditions are favourable, I am buoyant. When they’re not, everything feels futile. ‘Why are you still out here? ‘Why didn’t you get off when you had the chance?’ The voice in my head is insidious. My body ignores my mind. My body just rows.”

With her initial aim of challenging the all-time record of 52 days (set by Rob Eustace in 2014) discounted, Lia set her sights on breaking Roz Savage’s mark. However, with only 75 days’ worth of food, plus some extras, she had to contend with stretching her supplies out to last at least 90 days. Lia also made the decision in the final weeks to continue to Oahu, instead of Hilo, on the big island and the first harbour when approaching from the east. She had knowledge of the new landfall, after sailing there in 2007, and was stationed at Waikiki Beach while awaiting the arrival of the rowers, as Safety Officer in the Great Pacific Race in 2016.

As the miles ticked down, Lia’s final days at sea were finally aided by favourable conditions as she logged impressive daily mileage totals, with encouragement from her land-based team which helped throughout the row with weather routing, medical support and safety, as well as keeping friends and supporters updated on her progress.

This row, which Lia calls the half marathon, is viewed by Lia as training. Her main target is to row 5,500 miles from Japan to San Francisco in spring 2021, bidding to succeed where 19 other attempts have failed. To maintain her mission to become the first solo rower to cross the North Pacific, Lia relies on the generosity of her supporters through her crowdfunding campaign. Anyone who would like to add any amount to contribute to the cause can visit www.patreon.com/RowLiaRow. The RowLiaRow ‘Family of Believers’ are entitled to exclusive blog content and updates.