HomeEventsRegattaRolex Fastnet Race: extra downwind and a new last roll of the...
EventsRegatta

Rolex Fastnet Race: extra downwind and a new last roll of the dice 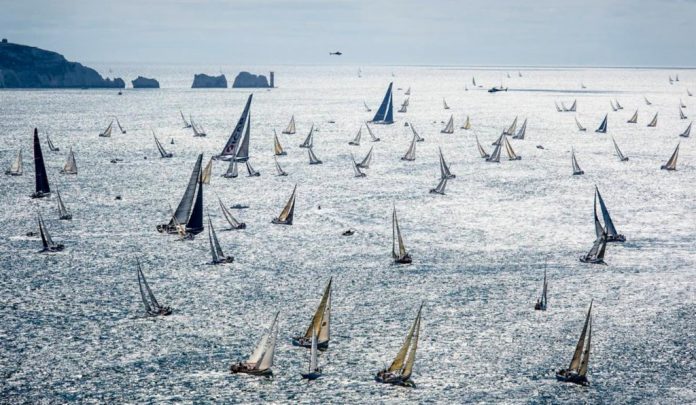 Moving to Cherbourg for the finish of the Royal Ocean Racing Club’s premier event, the Rolex Fastnet Race next year will see navigators and crews facing a few significant new challenges.

Firstly the new course is 90 miles (or 15%) longer, making it 695 miles, based on the shortest route. Of this the first 500 miles (or 72%) of the course remain unchanged – setting off from the Royal Yacht Squadron line on Sunday 8 August 2021; heading southwest down the English south coast, negotiating Anvil Point, Portland Bill, Start Point and the Lizard en route, before the vital decision over which side to pass the Traffic Separation Scheme exclusion zone off Land’s End. Then there are the open ocean crossings to the Fastnet Rock and back to Bishop Rock, southwest of the Scilly Isles.

From here the course changes marginally. From Bishop Rock it is possible to lay directly Cape de la Hague, the northwesternmost headland of the Cotentin Peninsula, before making the final slight starboard turn for the last 10 miles to the finish line within Cherbourg’s harbour. The new course from Bishop Rock is 91°M, compared to 83° to the Lizard, however the added distance to Cherbourg may affect the make-up of the race overall.

Leading international navigator Ian Moore, who has carried out a weather study on the new course, explains: “The Rolex Fastnet Race is still predominantly a windward-leeward race with a big chunk of beating. 40% of the hours in the race are spent going to windward and 34% downwind,” he says. The longer leg to Cherbourg means that compared to the old course in typical prevailing southwesterlies, the upwind component of the race has reduced from 45% of the race’s duration while there is now 6% more downwind and similar reaching. Having run routing based on the weather for the last 10 years, Moore also observes: “It is not a super windy or super light race. 80% is in 6-18 knots.”

The long final leg to Cherbourg adds 90 miles to the course and is more open, but concluded with the crossing of the Alderney Race

More significant will be the final roll of the dice: how best to tackle one of Europe most powerful tidal gates – the Alderney Race, between Alderney and Cape de la Hague. “This is now the biggest tidal gate of the race,” states Moore. “It is strongest off Cape de la Hague, through the Swinge (between Alderney and Burhou, northwest of Alderney) and off the eastern Alderney shore. The tidal effect also covers a much larger area than it does off Portland Bill. There will be winners and losers here and it will be hard to get right.”

The Alderney Race’s effect will also be increased after start day’s new moon, with finishers into Cherbourg expecting during a period with a very high tidal coefficient (86-89). The good news is that the Alderney Race runs slightly faster in the fair northerly-northeasterly direction than it does when it is foul. Moore says that navigators will be keenly anticipating their arrival time at the Alderney Race. If it is when it is unfavourable then they try to gain tidal relief by leaving Alderney to port or, more dramatic still, sidestepping the Alderney Race altogether by approaching Cherbourg from the north. This latter route is made less attractive due to the location of the Casquets TSS exclusion zone that forces boats to stay south, unless they wish to round its north side, requiring them to sail 11 additional miles.

His assessment of the new course is similar to that of Ian Moore: “If you look at the prevailing conditions you could expect on an average year with southwesterlies, it will shift the proportions of the race – if it was predominantly upwind and tight reaching and around one third was broad reaching and running – it will flip those proportions. So there will be more open angle sailing. Also the majority of the race will now be post-Fastnet Rock rather than before it. With more downwind, it could well favour the broad reaching/downwind machines that can plane.”

As to the new long final leg between Bishop Rock to the finish, Field observes that while the old course used to be mostly a coastal race, the route to Cherbourg is much more open. “That’s good because there will be weather changes over that period.”

As to the Alderney Race, Field adds: “It is just another obstacle to negotiate, no different to the other tidal gates, but it is something that’ll have to be analysed coming back from the Fastnet. It will be time dependent and if your timing is stacking up to be an hour before or after the tidal gate, that could have a major impact on your race whereas if you get there in the middle of the flow, your strategy is pretty much dictated to you: Get in it and crack on or avoid it! It just adds another interesting navigational dynamic, a new dimension, to the race. I enjoy doing races like the Fastnet because you have constant stimulation…”

The new finish in Cherbourg is due to the joint co-operation of the City of Cherbourg-en-Cotentin, the Communauté d’agglomération du Cotentin, the Conseil départemental de la Manche and Région Normandie with the RORC. While French boats have dominated recent editions of Rolex Fastnet Race, good knowledge especially of the Alderney Race (or Raz Blanchard as it is known locally) is certain to benefit local residents. One is the 2013 winner, Alexis Loisin, who warns: “Raz Blanchard – there is a lot of current there and maybe the gate there will be open or closed, so you will certainly be able to win or lose the race in the last hours. Your timing must be good – so it is good to have Rolex as a sponsor!”