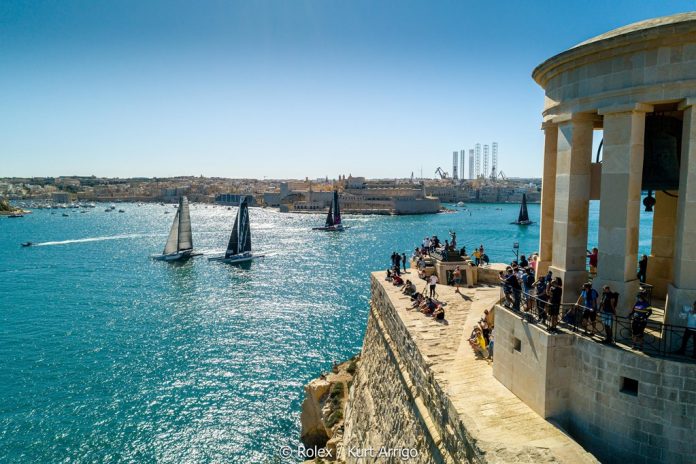 The 41st Rolex Middle Sea Race is virtually done and dusted. Only one boat is left at sea, her crew clearly set on completing the course despite the likelihood that they will finish outside the race time limit. Kudos is due to Luigi Paolotti and the team of the Dufour 405 Tattoo (ITA) for their fortitude and perseverance. Otherwise, with this morning’s arrivals, the full list of class and other prize winners has been established, ready for tomorrow’s final prize giving being held subject to the restrictions imposed by COVID-19.  The ceremony will provide a final opportunity for the Royal Malta Yacht Club to recognise the achievements of the past week.

In terms of fleet winners, there were six principal classes racing under IRC for the Rolex Middle Sea Race trophy and the Rolex Chronometer.

IRC 1
In third place it was the VO70, I Love Poland, entered by the Polish National Federation and featuring a team of primarily under-30s led by Grzegorz Baranowski. The Polish entry also took home the RLR Line Honours Trophy and a Rolex Chronometer for being first monohull to finish on the water. In second place, the Hungarian R/P60 Wild Joe of Marton Jozsa had taken the fight to I Love Poland throughout the race. In first place, though, it was the Dutch Marten 72, Aragon. The largest boat in the monohull fleet, Andries Verder and Arco van Nieuwland’s crew were led by Wouter Roos. “This is our first Rolex Middle Sea Race and we were positively surprised,” said Arco van Nieuwland, continuing: “The scenery was beautiful, but also the Royal Malta Yacht Club’s organisation and communication were very good. The Aragon team is a mixture of family, friends and world class sailors, such as Thierry Fouchier, who is a great tactician.” In turn, Andries Verder added: “We had a fantastic start in amazing surroundings. All the way around the course you had to use your heads more than anything else.”

IRC 2
Third in IRC 2 was Eric de Turkheim’s polished crew, featuring Laurent Pages, on the NMYD 54 Teasing Machine. The French entry has a good record at the Rolex Middle Sea Race having won its class previously. The Russian TP52 Freccia Rossa, a former winner at the Rolex Giraglia and owned by Vadim Yakimenko, came second. In first place, fourth overall, and winner of the Swan Mediterranean Challenge Trophy, was the ClubSwan 50 Balthasar, entered by ocean-racing sailor, Louis Balcaen from Belgium. “Louis and all the team are very happy,” commented Balthasar’s Rogier van Overveld. “To win the class, against top competition racing IRC designs, is a great result as Balthasar is a one design. It was Louis’ birthday on the second day, and he would not let us bring a cake as he is super-conscious about weight. We sneaked some party hats on board and celebrated at Stromboli! Well done to the organisers for producing an excellent race in difficult circumstances.”

IRC 3
Ramon Sant Hill’s Farr 45 Ben Estates Comanche Raider III from Malta put in a great effort to finish third in class. Carl Peter Forster’s Aquila 45, Katsu (GER), was equally determined and finished second behind the outstanding French entry Tonnerre de Glen, skippered by Dominique Tian, which won in class for the third year in a row and came second overall in the IRC standings. Olivier Kraus, the navigator and a winner with Spirit of Ad Hoc in 2008 had this to say: “This race was really hard for a navigator. The weather forecast was not very easy. It was really difficult to work out when to tack, when to gybe, when to go straight on, where is the wind, where is no wind. And, it was long!”

IRC 4
Competing his first ever race, Luigi Stoppani will have been thrilled to take back to Italy the prize for third in class with the Swan 48 Mia. Impressively, second in IRC 4 was the Italian double handed entry of Marco Paolucci and Andrea Fornaro with the Comet 45s Libertine. In first place and overall winner of the 2020 Rolex Middle Sea Race trophy, a Rolex Chronometer and a plethora of other prizes including the Transport Malta Trophy for being first Maltese boat home was Elusive 2, the Maltese Beneteau First 45, entered by Aaron, Christoph and Maya Podesta

IRC 5
In third came the German yacht Luffe 4004 Prettynama 2 entered by Dr Max Muller. Second place was secured by Alexey Moskvin’s J/122 Buran, while Jonathan Gambin, skipper of the Dufour 44R Ton Ton Laferla, was delighted to have won the class and finished the race in third overall. “This was a difficult race, but we managed to win our class,” commented Jonathan Gambin. “After a great start, we lost the breeze inside the Messina Strait and could do nothing but watch boats catch us up. We had a great battle with Elusive 2 on the water, but in the lull after Favignana, they got into clear air and our chance of winning overall really stopped there. We are thrilled to win our class and honoured to place third overall.”

IRC 6
Jean Luc Hamon’s French entry, the JPK1010 Raging Bee, finished third with Leonardo Petti and the Italian J/109 Chestress in second, good reward for returning to the race for a second assault on the famous course. Class winner was Timofey Zhbankov with the JPK1080 Rossko from Russia, again just reward, in this case for undertaking an epic adventure just to get to the start. “This is our second race with this boat. We also raced as a crew on a Salona 41 in a very windy race in 2017,” explained the navigator Alexandr Musikhin. “This is the second time we have won our class, but we come back every year because we want to win overall! It is a hard race physically but, also, psychologically. To keep concentration and also the right balance between rest and work is really hard. The Rolex Middle Sea Race is probably one of the hardest races in the world in that respect, so we are happy to have done so well.”

The Double Handed Class prizes went to Zenhea Takesha (ITA) for finishing first on the water (Andrea Vattani Trophy) while Gerald Boess and Jonathan Bordas’ J/109 Jubilee took home the John Illingworth Trophy for first on corrected time. Gerald from Austria & Jonathan from France met on the 2013-14 Clipper Round the World Race. Jonathan said: “The leg from Messina to Stromboli went very well for us and was a key component in our performance, we went to the right and got the lift. Racing with other boats fully crewed was also an advantage, especially the great sailors on Hakuna Matata.” Gerald commented: “Preparation is very important, especially sailing double handed. Everything from stowing the provisions on the boat to organising a watch system. You also need to be thinking ahead about what is coming. Trust in one another is also very important, as you can have proper sleep during the race.”