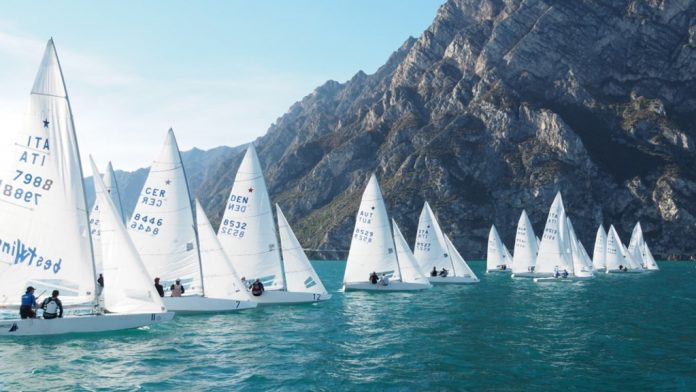 The first and only Continental Star Class Championship for the year started today in Riva del Garda, Italy, with two very nice light wind races for the 18 boats attending the 2020 Europeans.

The Championship was meant to be sailed in September in Stockholm, but it was rescheduled to 2022, due to Coronavirus.Riva del Garda stepped in, after the very successful 80 boat 2019 Europeans, when the situation in Northern Italy was improving, and 30 teams entered in the summer and went on training at the organising club Fraglia Vela Riva. Over the last few weeks the virus in Europe is forcing to cancel events once again, but Trentino is still a safe region and sailing is considered a very low risk sport. The Italian Sailing Federation gave its blessing to the event, which was today also blessed by beautiful fall weather.

The level of the fleet is exceptional with two past Star World Champions, Enrico Chieffi (ITA) and Eivind Melleby (NOR), two former Star European Champions, Diego Negri (ITA) and Hubert Merkelbach (GER), a Laser Silver Olympic Medallist, Tonci Stipanovic (CRO), a Finn and Star Olympian, Finn World and European Champion Hans Spitzauer (AUT), and so many other incredible sailors both among the skippers and crews.

Two races in the first day with two different winds. The 1 o’clock one was sailed with about 10 knots from the North, and was very well managed by Piet Eckert (SUI) with Volvo Ocean Race crew Frederico Melo (POR), in the lead up until the end, followed by Class President Hubert Merkelbach with Kilian Weiss (GER) and in third Jorgen Schonherr (DEN) with Markus Koy (GER). The 3pm race was sailed with the typical afternoon Lake Garda southerly breeze, the ‘Ora’, on the lighter side compared to the usual as it never went over 8-10 knots. The winner of this race is Argentinian world-renowned yacht designer Juan Kouyoumdjianwith Fernando Rivero (ARG), followed by Tonci Stipanovic and Tudor Bilic (CRO) and in third Piet Eckert/Frederico Melo, who are also the provisional leaders of the overall ranking.

The schedule for tomorrow and Saturday is for two races per day until Sunday, November 1st, when, if all goes according to plan, the last race of the 2020 European Championship will take place and the winners announced.