Ice exclusion zone is set, 24,296 miles is the distance 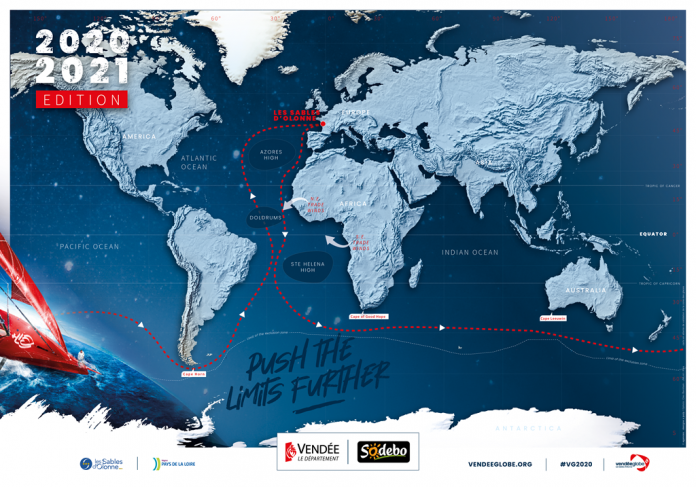 Following the positioning of the Antarctic Exclusion Zone, Race Direction of the Vendée Globe have confirmed the course distance for the imminent ninth edition of the race at 24,296 nautical miles, 44,996kms. The theoretical course distance in 2016-17 was 24,394 miles.

In collaboration with CLS, the race partners who monitor the ice zones and movement, the Race Direction have now marked out the exclusion zone using 72 GPS points. The 33 solo racers must stay north of this limit line at all times.

Jacques Caraës, the Vendée Globe Race Director, explains:
For the past several months, we have been working with CLS (Collecte Localization Satellites) to monitor the movement of ice in the Antarctic zone, in the Indian Ocean as in the Pacific Ocean. These satellite images are monitored and processed at CLS Brest by a radar specialist. We established an initial zone on October 1st and, last Wednesday, we refined the positioning and published the Start Version of the Antarctic Exclusion Zone.                                   ”

Overall the present and predicted ice situation has allowed the Race Direction to lower the Antarctic Exclusion Zone by around 1°. But they have moved the GPS points north by around 1 to 2° in the area west of Georgia. The proposed route was initially 24,385 nautical miles as at October 1st and on the start day it will be 24,296 miles. Obviously the further south the fleet races the shorter the route.

The position of the ice fields are not the only determinants in positioning the exclusion zone. The  Australian Maritime Rescue Coordination Center (MRCC) and the Australian Maritime Safety Authority (AMSA) request four points which mark their safe rescue limit from their centres, of around 1,000 nautical miles. This is agreed between the Australian authorities and the Race Direction in particular following the rescue of injured Yann Eliès in 2008. These four points are located at latitude 46 ° 00 South and run from 105 to 120° East longitude.

This zone can be updated during the race. Caraës explains:

We update the exclusion zone during the race, watching to see if the ice moves north. We take pictures before the first ones approach the Kerguelen and, if CLS detects an iceberg or suspects its presence, we issue an “Ice Report” to the fleet. And we can move the GPS points within a defined framework, based on the position of the leader, and which respects their navigation strategy.

There are also key Traffic Separation Scheme zones which are in place to keep the fleet away from shipping traffic schemes. The Sailing Instructions determine GPS points to delimit prohibited zones at Cape Finisterre, Cape Roca (the westernmost point of Portugal), Cape St Vincente (southwesternmost point of Portugal), Mauritania, and to the east and west of the Canaries.

For this 2020-2021 Vendée Globe, the Race Direction has also established two additional forbidden zones around TSS areas which previously might not have been considered to be on the usual course to the finish line of the Vendée Globe. But recall that en route to winning in 2016-17 Armel Le Cléach showed that, with the foilers and under certain wind and sea conditions, it was beneficial to go north of France before slanting back down to Les Sables. Thus the Ushant TSS and Scilly Ouest have become prohibited zones.

In order to make the tracking more accurate and easier to read the Race Direction will run a moving waypoint in front of the leader. This position, on the great circle route, is the mark from which the classifications will be computed.

Alex Thomson, Primed For Take Off
Third in 2012-13, narrowly second to Armel Le Cléac’h in 2016-17, British skipper Alex Thomson has focussed his programme on the top step of the podium since days after he missed out last time. He has armed himself with the most radical IMOCA in the fleet, pioneering the fully closed cockpit and developed many technological advances exclusive to his HUGO BOSS programme, not least in sail, rig and autopilot development. At five days to the start of the Vendée Globe Thomson is where he wants to be, ready to do battle.
Read more

Strengthening The Mental Game
Some years ago only a very few Vendée Globe skippers worked with sports psychologists or mental coaches but now as the ‘no stone unturned’ approach increasingly prevails, more and more are making sure their mental game is at least matches the performance of their boat and their hopes for the race. For some it is about strategies to relieve stress and tension, for others it is being able to operate at a high level for longer while eliminating small mistakes which on the Vendée Globe can be terminal.