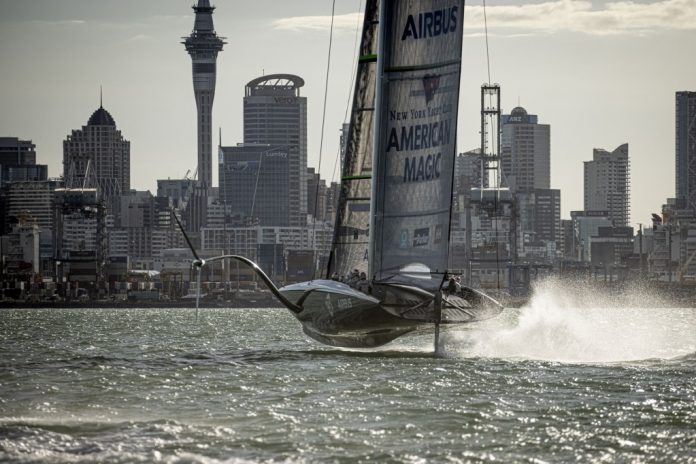 Each America’s Cup Challenger has a few key tools to work with: The AC75 class rule, fresh talent, proven experience and a finite amount of time. From these common ingredients grows a competitive philosophy that is unique to each team. For American Magic, the U.S. Challenger, this philosophy is centered around a daily refusal to be outworked.

“Our mentality is that each day is a race day,” said Terry Hutchinson, Skipper and Executive Director of New York Yacht Club American Magic. “When you practice like you race, and make your practice days harder than race days, the racing tends to get easier.”

Solving the design puzzle of the AC75 class rule and building a winning platform requires not only innovation, but boldness. “You have to have an attitude to how you’re going to approach the rule and the documents [that govern the America’s Cup],” said Flight Controller Andrew Campbell. “You have to have a certain perspective. You have to attack it. You can’t just react.”

In a normal America’s Cup cycle, each team would face the crucible of early exhibition regattas. These events would provide a glimpse into the progress of each team, and provide a stress test for each distinct philosophy. COVID-19 has upended much of that, along with the rest of the sporting world.

“This is such a unique regatta, and it’s such a unique time,” said Hutchinson. “Because of the world and the environment we’ve been living in, all the teams are going to face the challenge of not really having raced in the last twelve months. And yet we’re on the eve of something we’ve been preparing for for the last three years. I’m excited by that, I’m confident in the team and I’m confident in the trajectory that we’re on.”

Bold decision-making on the design and production sides, buttressed by aggressive training on the water, are the sources of this confidence, according to American Magic Coach James Lyne.

A combination of youthful ambition and proven talent can be found across each area of the 150-strong U.S. team.

“It’s really easy to look at us as a new team, but when you look around at every one of these departments there’s a ton of experience,” said Campbell. “When you see how we are hitting these milestones, when you see how we are performing day-in and day-out, you understand very quickly that we’re not a new team here. This is a team that’s ready to hit the ground running on race day.”

Oyster Yachts has announced the dates of its fourth Oyster World Rally, allowing a limited number of lucky sailors to reserve their...
Read more
- Advertisment -