Jérémie Beyou will restart Tuesday, Thomson leading into the Doldrums 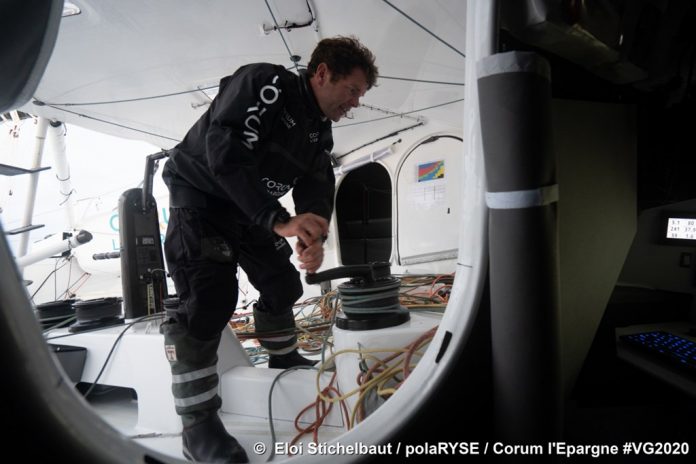 Jérémie Beyou, the 44 year old French skipper who had to sail 600 miles back to Les Sables d’Olonne after damage to his Charal on the second evening of the solo non-stop around-the-world race, has confirmed that he will re-start the race on Tuesday afternoon despite the leaders being around 2,500 nautical miles south, approaching the Doldrums tomorrow.

Beyou, who was the outstanding favourite to win the race, hit a floating object on the third evening of the race. The impact damaged one of Charal’s rudders, its mounting and control mechanisms, he broke a backstay and there was sundry composite damage to the deck of his IMOCA.

A round the clock team effort by up to 20 people who have been working flat out ever since the bitterly disappointed Beyou docked his boat back in Les Sables d’Olonne on Sunday afternoon, has returned the boat to 100% of its full potential, according the solo racer who finished third on the last Vendée Globe. Speaking during an online press conference from his apartment in Les Sables d’Olonne, he said:

“It’s strange to be replying to your questions away from my boat, Charal. But I’ll soon be back there, as thanks to the work carried out after the past few days, we now know the boat will be ready tomorrow morning and ready to take off on the tide in the afternoon. Excellent news. I would like to thank the whole team, as they have given it their all since I arrived back here in Port Olona. The Vendée Globe is a team effort and if everyone pulls together, we can work miracles. The main problem, the one that made me turn back, was the issue with the rudder. Technically, however the most problematic to repair was the traveller, but actually it was the rudder mounting and the control arm which had broken, and it is a structural part of the boat. We had to survey the damage first to see where the water had leaked in to and up to where, we needed to repair this on both sides. We had to work with a whole series of experts to figure this out and all within the time constraints. We also had some wind vane issues, main sail damage from the series of gybes when the rudder hit something. I really have to thank the whole team.”

Beyou has been locked down in isolation with his partner since arriving back. He purposely detatched himself from all race updates and social media.

“It was very hard for me to not be there (during the repairs) but also I had to take my head out of the race and I did not look at the rankings. I shut out and did not look at any social media, all this whilst I was trying to stay close to my team and support them remotely. Since the start we have been working as a very close-knit team. On the first night they sent me a message to say that they did not think they would manage to fix it within the time limit, but deep down I knew they would. So it was probably a good thing that I was not with them so I could get time to recover and really figure out the whole meaning behind the project.

How everyone feels about it, the public, the Charal employees, the press, friends…I just did not answer any messages, but I knew that I had to go back to the race. I did hear about Nico’s dismasting…I know I said I cut myself out of the race coms, but I did hear that and I am so so sorry for him and his whole team. I know how much energy it takes to do a Vendée Globe and what is needed to get a project off the ground and going.”

“There were 10 to 15 people who put all their combined efforts together to get the job done. The architects from VPLP, Gurit composites, Manu Le Borgne,  and behind them you have the logistics team, the team who did the hardware components, the splicing and ropeworks guys, the team at North Sails ready to do repairs to the main sail,  the Pixel electricians. The list is endless. When I got to the pontoon the other day and saw what a team of experts was there waiting, I said to myself, my goodness! You also feel you need to be there and to be on site and respect all the work that has been done, that is being done and you just have to go. I have often said that the Vendée Globe is a race that is carried out by a team, and here you go, that is demonstrated by these people. Miracles can happen when you really try.”

Speaking about leader Alex Thomson he said, “I am happy for Alex being in the lead, I know he has a really good boat, and I am happy for him. He did a great move a few days ago. All I know is that Jean was in the lead for a bit and now that Alex is leading the charge. I did just try to disconnect a bit. After all that we will see what happens back on the sea. I really prefer to have no expectations, I don’t want to set any goals. I don’t know what we will discover. So we will see.”
Corum Dismasted.

While the news that Beyou will restart was universally greeted with approval and encouragement, there was huge disappointment for Nico Troussel and the team of CORUM L’Epargne. After dismasting just before 0800hrs French time this morning while fast reaching in the trade winds, 270 miles north west of the Cape Verde Islands, Troussel becomes the first racer to officially abandon the 2020 Vendée Globe. He had spoken to the 0500hrs radio call and was in good shape, sailing at up to 22kts boat speed under a single reefed main and fractional code zero. This evening the double winner of the La Solitaire du Figaro is making to the Cape Verde Islands at around 3 knots, expecting to take around three to four days to get there.

Leader Hugo Boss At The Doldrums Tomorrow Morning
Race leader Alex Thomson was being chased hard today by his French foiling rivals. The British skipper has 85 miles in hand over second placed Jean Le Cam and 120 miles on the hard driving Thomas Ruyant. He will likely slow down entering the Doldrums tomorrow, Tuesday morning. Weather modelling predicts a smooth passage for Thomson, but the five times Vendée Globe racer maintains low expectations, “They look lovely…for the Doldrums, but you know what happens there. You get stuck. It is like a little game, they entice you in and tell you it is going to be alright and then….they trap you, like Charal in the Jacques Vabre last year. I am not going to be fooled. I expect the worst and anything less will be a bonus.” said Thomson this morning on a video call.